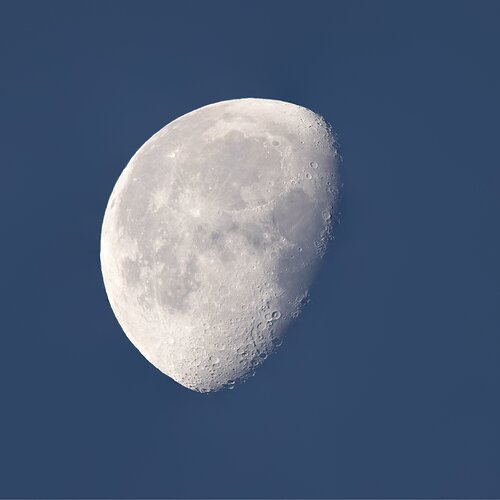 Early morning yesterday at the recently-discovered Osprey nest provided no good images, but I did enjoy a gorgeous moon floating in the dawn sky with a very bright Jupiter for a companion.

Is this a composite: No
Canon R5, 100-500 + 2X at 1000mm. Wide open at f/14, ISO 4000, 1/500 sec. Should have changed that but I was laying in wait for an Osprey to do something interesting. Just shot the moon as a brief diversion because it was pretty. I was on electronic shutter so in the half second it took me to get off the button I had 9 frames. Scrolling thru them at 100% I could see very fine atmospheric turbulence distortion in all of them, swimming around at various places in each frame, so I had the idea to try a cheap imitation of the “lucky imaging” that astronomers use to shoot planets. (Talk about telephoto…) So I stacked them in PS and did auto-align (to compensate for any slight camera movement between frames) and then auto-blend and I got a much sharper image than any of the subs. Then I did Topaz Denoise, with its default sharpening, then a touch of Nik CEP Detail Extractor, which necessitated a little more BG smoothing.

It might have been better to denoise each frame before the stack but that would take some time, and I’m happy with this result. Cropped to 25% of the full frame.

I should go back to some lunar eclipses where I have similar bursts and try this, but at night there was probably less thermal turbulence so it might not be much help.

I guess this month must be the “osprey moon”. As usual, a technical feat well done on your part. I love the crisp, clean look of this image, and know that only came from a lot of hard work to get here.

Okay now you have us all hoping for an osprey silhouette against the moon !!!

Oh, no sweat @Ed_McGuirk. But you’ll have to settle for this. It was my worst day ever for Osprey in flight but this guy did a flyby, and I always try not to cheat by using a shot from a different day or location. 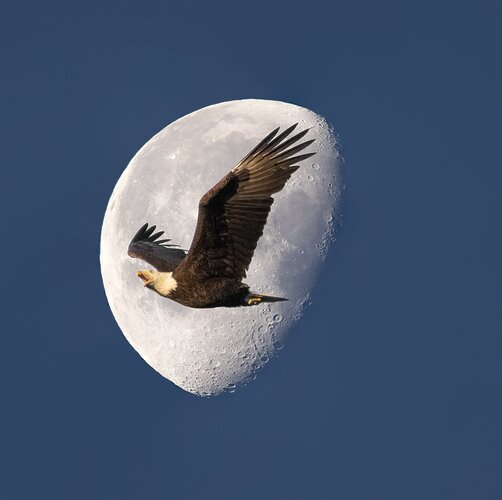 Thank you Diane, I just knew that you had one of these !!!

Going back 25 years to the film era, I actually got a shot of an osprey in a tree silhouetted against the moon at Everglades NP on Provia 100. Obviously the dynamic range and grain of that image pale in comparison to what you can do today. The moon was a bit smaller in my shot too

Your post brought me back to that day 25 years ago.

Hey @Diane_Miller - such a clean & sharp image of the moon! Love reading about the stacking techniques you’ve used also!

I did a quick little edit in camera raw

Thanks, @Dale_Gribble. On this very clear morning the soft predawn color of the sky and the silvery gem of the floating moon was quite striking, and the sky was bright enough that I was able to capture the tonal balance accurately. Although the moon appears to me to have a slight cool cast, the RGB values are essentially neutral and it is the soft blue sky that provides the magic here, for me. I considered a slight tweak to the surface detail but decided there was a purity to it that I wanted to leave as seen. I have moons shot in darkness in which I have brought out more detail.

I wished for something to provide a silhouette against the sky for the uncropped frame, but nothing was available and the moon was fairly high. There was a tall and artfully scrawny redwood off to the left that would have been good, but it was far too close for my long lens and would have required a composite as the view that would have put it in the same frame with the moon would be from about 200 ft above a lake.

I did go back and bring out a little more detail, though. The difference is subtle but I think it may read better for an isolated moon. I went to a slightly more relaxed crop, too.

I’ll try the composite I visualized, using a shot of the same redwood that I had done several years ago, and post it later if it works.