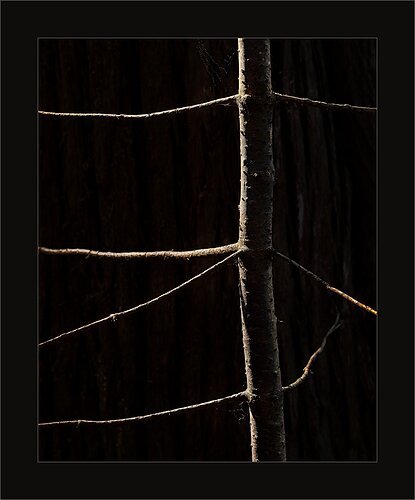 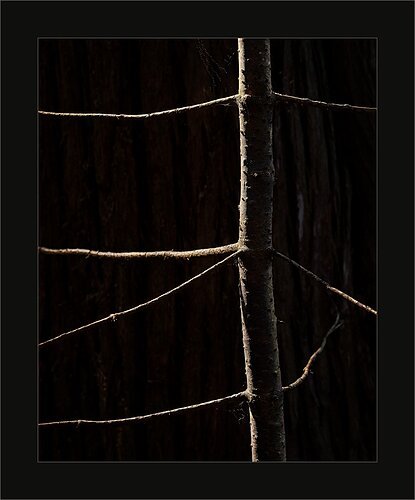 After a long day of paddling, just as the sun was getting low, we found our camp site. After landing and getting the gear hauled out of the canoes, but with camp set-up and dinner prep still in front of us, I happened to see an open spot in the forest where the sun had penetrated like a spotlight. I was captivated by the scene and risking the wrath of my wife, grabbed my tripod and camera. But I could not compose a picture that captured the magical feel of the light coming through that forest opening. I was feeling a bit pressed since my wife was wondering why the tent was still lying on the ground, but it occurred to me, just before I packed up to get back to the real business at hand, that maybe I was trying to get too much in the frame – “couldn’t see the trees for the forest” as it were. So, I moved in and took some close-ups just before the light took its leave. I thought I was taking a picture of a rim-lit silhouette of this young tree and was delighted to find that my camera had captured far more detail than I’d anticipated. I’m amazed at the dynamic range that even my little Xt-2 was capable of. It was so dark in the forest except for where the light was hitting that I was barely aware of the Mother tree that was directly behind the little one. The spider webs were an added bonus. I’ve never really done an image like this before, so I’d really like to get some feedback. I find it rather striking but wonder if that is enough to hold one’s interest. I like the Mother tree behind and felt that keeping her bark soft and subdued would juxtapose nicely with the rim-light and detail on the foreground sapling. Anyway, I’d love to get your impressions or suggestions.

Oh boy…the tension! Not just in the photo with that rimlight, but with your wife while you fight your need to catch the light at its best and do what’s best for your relationship and your need to get the camp set up. I’ve dashed off in the middle of things (mostly dinner) to grab a sunset shot or something with some gorgeous light that just won’t wait. Dinner will. The camp will. The tent will, but I understand how hard it is to satisfy both requirements.

Was it worth it? I think so. The little sapling is lit beautifully and you’ve pulled it out of the shadows really well. That said, I don’t think you need the mother tree here. She’s barely visible and if you hadn’t told the story, I’d have wondered what it was and why you left it in. Maybe if you think she’s important, you should bring her up more in the shot. Right now she looks accidental or incidental instead of part of the story. Just my impression and reaction. Apologies to your wife, but I’m glad you stopped for a bit and I hope you didn’t have to sleep outside the tent!

@Kris_Smith - Thanks, Kristen. Ah yes, dealing with conflicts of interest!
As to the background, its a shame that the jpeg just doesn’t seem to show what I see on my monitor as an RAF. I even did brighten the mid tones for this post but it still doesn’t read very well. I don’t really have the energy to redo this image just for jpeg although perhaps I will give it a try. The problem however, is that in an image like this one, what I see on my monitor and what plays as jpeg is sadly quite different so its hard to tell what I’ve got until I post.

I think this is an absolute beauty! I love the haunting feel of the image and the light is outstanding. This was more than worth risking the wrath of your wife to capture (easy for me to say).

For me, this is one of your very best.

Kerry, this is a wonderful image with some fantastic elements and structure to it! The rim lit branches really pull me into the frame. There is a haiku quality to the image in that the main subject is the sapling with the rim lighting but the secondary smaller subject is the spider web. The image has a great visual impact.

Hi Kerry,
This is one of those pictures that I keep studying as there is so much to see. I like the subtleness of the mother tree in the background. If you brought it up anymore, it might make the beautiful web harder to see. The light is perfect and I think worth a possible spat with your wife.

Ah, the child stepping out on their own, but still reaching back to a parent. I do think it would be stronger if you could bring out the mother tree. If she was just a bit more visible. the story would be more obvious. You might consider desaturating the warm tones in the lowermost branch that touches the right side of the frame - it stands out a bit more than the others because of its warm color. If it also was burned a bit, it might enhance the feeling that the little tree is heading out on its own towards the left side of the frame.

This is a very nice image. What I like most about it are the arrangement of shapes (rectangles, triangles, and parallelograms) within the square frame. Having that thin white border inside the frame helps the viewer appreciate the arrangement better. I agree with other that the ‘mother’ isn’t conspicuous enough to see the story you’re trying to get across. Although, as you say, you see her in the raw file. I think it’s a rather elegant creation due to the simplicity (economy) of the colors and tonal range. I wonder whether you would lose that simplicity if you made the ‘mother’ too visible. I suspect that that’s the reason you have made her so dark.

Kerry, I don’t think I can add anything to the discussion so I’ll just say that I am enjoying viewing the larger image on my screen and exploring the whole. Nicely seen and done.

Such a stunning thoughtful image, Kerry. For myself, I like it as is and agree with others about leaving the “mother” tree more subdued and let the twig take the spot light. Very nicely seen and captured.

@Harley_Goldman - Harley, that is high praise indeed. There seems to be a general consensus that between getting the shot and sustaining a lasting relationship with my wife, the true artist picks the former. Caramba!
@alfredomora - Thanks so much for your enthusiastic feedback.
@David_Mullin - thanks so much, David. That you want to keep looking is the highest compliment a photograph can receive. Much appreciated.
@Bonnie_Lampley - I appreciate the feedback as always. I posted a rework but, honestly, its pretty crappy. This is a case where the RAF just doesn’t translate to a jpeg well. I did bring up the brightness in the mid tones but everything is muddy and too dark where it is darkest, actually kind of blotchy - a real dog’s breakfast. I would have to do a complete rework for jpeg and even there, I don’t think it could pick up the subtlety of tone - so I’m not going to bother. I did reduce the saturation along the right branch and dodge a bit as you suggested and I think that makes a positive difference. I feel a bit bummed that no one online can see this image the way I mean it to be seen.
@Igor_Doncov - thanks for your always thoughtful feedback which, helps me understand my own picture better after having read it

As for the background you can check out my remarks to Bonnie. Again, it really is a bit of a bummer that I can’t display this image online as I mean it to be seen. A rough approximation will have to do.
@David_Bostock - Thanks David. I really appreciate your taking the time to look and comment. Much appreciated.

This is a case where the RAF just doesn’t translate to a jpeg well. I did bring up the brightness in the mid tones but everything is muddy and too dark where it is darkest

@Kerry_Gordon Kerry, so bringing up the shadows in the RAW file (just for the mother tree) doesn’t work? I can see that you wouldn’t want her to be too explicit (as Igor noted).

@Bonnie_Lampley - That’s what I’m finding. I suspect that the subtleties of tone and colour at that low light level is just beyond what a compressed jpeg file can reproduce although it is quite possible that I don’t know what I’m talking about

You can see the rework above. I raised the mid tone brightness quite a bit for that but it is very muddy and very dark all around the edges such that detail, which in this case was intentionally rendered quite soft , is lost.