So I’m dropping this here because I’m curious if you guys plan or have ideas for where you want to take an aspect of your photography. I’m a mushroom fanatic and am so glad that ‘if it grows it goes’ is how Flora works around here. Just warnin’ ya now…I do have to take a picture of every mushroom I see. 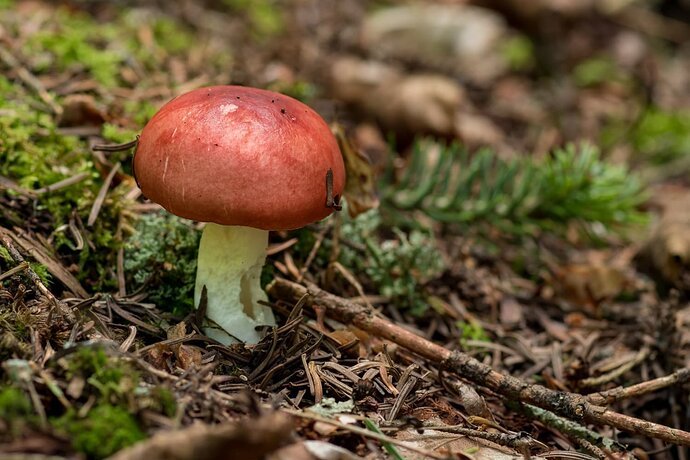 This is a favorite from a couple of years ago…a little russula naturally semi-spotlit on the forest floor. While I most often use natural light for all my mushroom shots, this year I’m adding a Lume Cube LED panel to the mix as well as photo stacking. Neither have I done with 'shrooms so it’s new in the sense of the subject. Last year I paid for a webinar that was all about mushroom photography techniques and both of these areas were touched on and I’m excited to add them to my process.

One aspect of fungi photography that I struggle with…well maybe struggle with isn’t the right word. That I vacillate with is clean up or gardening. This image is one of the messier ones in my portfolio and I deliberately left it that way. I had my hand poised to move that stick and then decided not to. Sure I could have shot with and with and without it, but I got irritated with myself at having to pick off every pine needle and twig in the area before taking a picture. Oy vey. When is enough enough?

Interesting comment on the stick, Kris. I usually seem to take the first shot or stack then look at them and go “where did that stick come from?”. Then I remove it!

I usually seem to take the first shot or stack then look at them and go “where did that stick come from?”.

I do the same and think that ‘chimping’ during the process actually helps me define and arrive at a final image. Our brains process 3D so well that sometimes we just can’t see something that becomes blatantly obvious when we see it in 2D. So I take shot after shot and refine things as I go. If I’m smaht as we say in New England, I will delete the first few shots right off the memory card. If not, I usually start evaluating images at the end of the session first since those almost always end up being the keepers.

To misquote Will Rogers: I have never met a mushroom I didn’t like. I used to eat them. Now I’m so obsessed with photographing them that I have to restrain myself. I have not compunctions about cleaning around the mushrooms. However, a tidied mushroom is not nearly as attractive as one that’s not. That’s because one of the attractions about mushroom is that they’re hiding, peaking out at you. Here’s a couple: 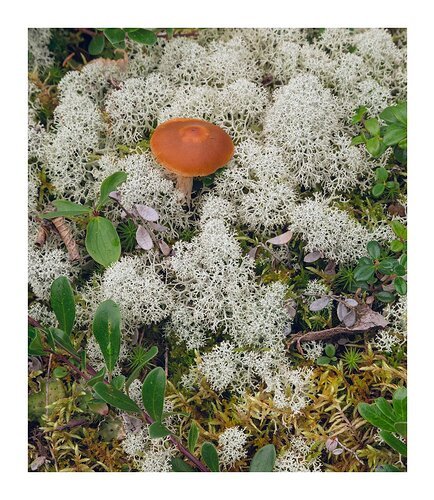 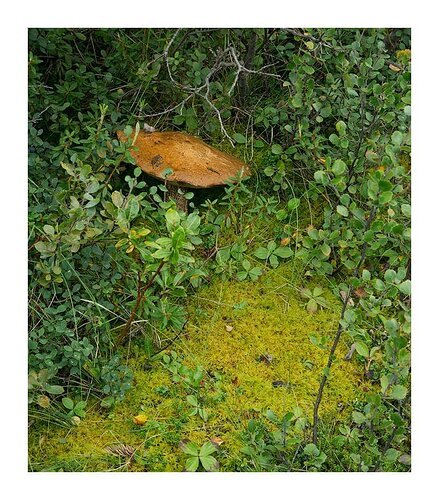 Those are two great examples, Igor. Glad to meet another addict. Don’t you find that once you notice a few, they all start to come out? At first it takes a little practice, but then you see them everywhere.

Just had a scan around the yard, not much up yet except for some puffballs and a few of these - 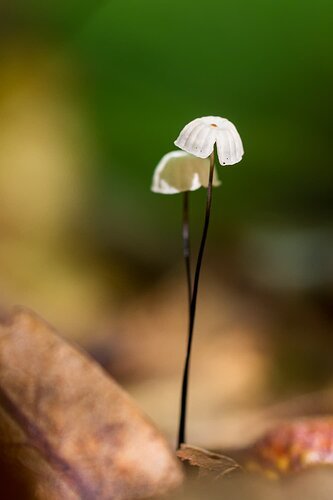 Marasmius capillaris - the ones that are up now are smaller than these - with caps 2-3mm across. These were more like 7-8mm across.

Kris, I like the way the stick seems to be pointing to the mushroom. The only one that bothers me any at all is the oof one at the bottom of the image, but even that isn’t an issue, and probably because the location of mushrooms is usually a bit untidy. It sure is a nice colorful one.

That’s a truly dainty mushroom. It’s so delicate. I don’t believe I’ve ever seen that one. The caps look like parasols.

One aspect of fungi photography that I struggle with…well maybe struggle with isn’t the right word. That I vacillate with is clean up or gardening.

“To garden, or not to garden,” that is the question.

Thanks, Kris, for raising this point of discussion. It’s not just a part of fungi but of all floral subjects that are short, low-growing species. It’s also not just cleaning up the area around the subject, but the impact we have in the broader area when we place the tripod, move around getting the best angle, kneel, or lay on the ground.

My feelings on the subject are partially based on my years managing protected land for a regional land trust. I stewarded tracts from less than an acre to over 5,000 acres. All were critical ecological lands in western PA, and several with rare habitats and species. On the extensive tracts, the most damaging intrusions were ATVs and dirt bikes (motorcycles); on the small parcels, usually wetlands, the most damaging intrusions were photographers.

The damage was trampling around clumps of the rare species from people laying on the ground to get the eye-level shot, gardening to the point that there was a ring of bare ground. The most infuriating act was having an orchid picked then placed with another clump, so the image was balanced.

Thus my views on “gardening” are shaped, or some would say jaded, unfortunate actions by a few.

However, a tidied mushroom is not nearly as attractive as one that’s not.

Nature is messy. Again, Igor makes a strong point [quote=“Igor_Doncov, post:4, topic:22879”]
That’s because one of the attractions about mushrooms is that they’re hiding, peeking out at you.
[/quote]

That said, I don’t see a problem with some minimal actions such as removing a leaf that has recently fallen, carefully changing the position of debris in the foreground, or laying a larger stick in the background to hold down the leaf litter.

As to getting a low angle, the “three-point” stance is imperative. One knee, one elbow, and one toe. No laying prone. Modern cameras have been a boon with moveable LCD screens. I carry a bean bag to rest the camera on the ground and kneel to shoot.

However, my first choice is to find subjects alongside a trail where I can lay prone without crushing vegetation. Not all subjects are in such a position, but searching an area rather than taking the first subject you find is the alternative.

I could go on, but I won’t right now. I’d like to hear reactions to my comments.

Finally, I see a set of suggested dos and don’ts for wildlife photographers elsewhere on this website. Should we have a similar message for plant photographers?

I just had to add a fungus. Phallus indusiatus bridal veil stinkhorn, near Soroa, Cuba. I could have gardened to show the fullness of the veil, but it was hiding. 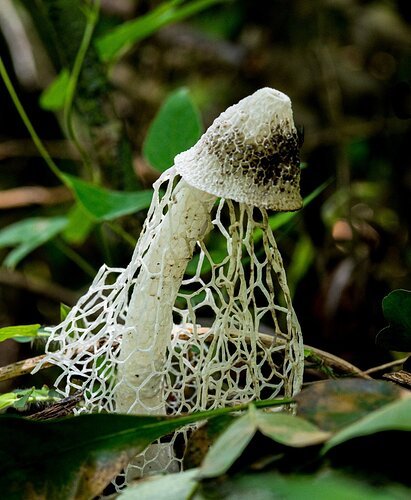 I could go on, but I won’t right now. I’d like to hear reactions to my comments.

Tidying up is becoming less and less of an issue with each newer version of photoshop. I can’t believe how good Edit/Fill/ContentAware has become. It’s as though it reads your mind and knows exactly what surrounding area to use to replace your selection with. And it does such a good job with uneven surfaces. It will remove the offending branch and connect the missing ones. I never use the clone tool any more because of imperfections.

Thanks Paul for a thoughtful response and one I’d expect by reading your posts.

leaf that has recently fallen, carefully changing the position of debris in the foreground, or laying a larger stick in the background to hold down the leaf litter.

This is about as much as I ever do. Bending or holding things out of the way and trying desperately not to trample, crush or spin(dle). First is respect for nature, second is respect for my work. I would be sick to see some of the destruction you’ve witnessed with regard to photographers. I have seen what ATVs do with unrestricted access. It’s county-by-county in Wisconsin and some counties have destroyed a lot of valuable and carefully managed areas with basically no rules for motorized vehicles.

Tidying up is becoming less and less of an issue with each newer version of photoshop.

I agree up to a point. If something is easily removed and not damaging to any living thing, I’d much rather remove it in the field than have to mess with it in post. I find that as I take a few shots, and examine them in the screen, things pop out at me that need to go. Usually it’s the last shot or two that end up being the keepers.

Our first thought with all images should be the tenets of “Nature First.”

I agree with @Igor_Doncov that the advances in post-processing have given us tools to tidy up. Otherwise, I’d be chain-sawing telephone poles. Adjustable LCD screens and WiFi connections between the camera and iPhone/iPad have also helped.

Kris makes a good point; [quote=“Kris_Smith, post:10, topic:22879”]
If something is easily removed and not damaging to any living thing
[/quote], however, how do we define “not damaging”?

My test is if something is not in contact with the soil around a plant. That would be a newly fallen leaf or twig. But clearing away the decaying leaf litter is a problem. It’s making a significant impact and an effect that we might not easily understand.

That may seem over the top, but there are minute interactions in plant communities that we don’t need to do the slightest damage for a photograph.

Again, my approach is probably skewed toward the extreme by past experiences.

I meant to add a reply here, but got distracted.

I think all of our approaches are, Paul. Experience is what gives us judgment and drives decisions. I won’t go as far as you in terms of clean up - I will remove things that have come in contact with the soil. Not violently, but gently. Probably a browsing deer or rooting skunk does more “damage” than I ever will. Once I pushed a large-ish dead tree out of a scene in a moss-covered glade because it was annoying me and probably that was going too far, but I was less sensitive to my presence then than I am now. We all learn and adapt and I try to tread lightly in the name of discovery and my art.