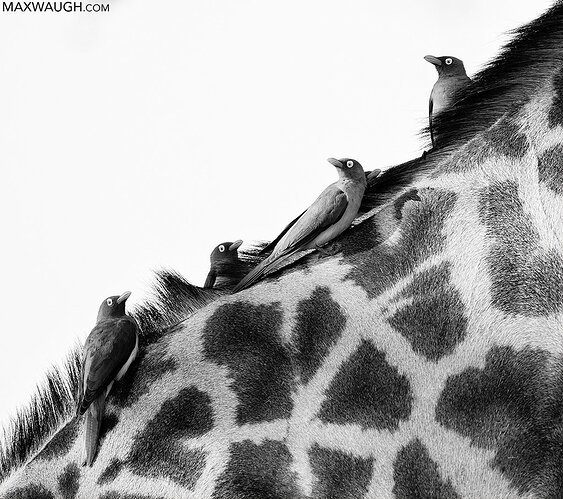 It’s common to see oxpeckers riding on larger mammals during Africa trips, and I often stop to photograph them on giraffes in particular. I enjoy lining up the small subject (which has some spots of bright color, with this species a red bill and bright yellow eye) against the warm and bold patterns of the giraffe’s fur. In fact, I always present these scenes in color… but this shot was different.

I think the strong diagonal, the distribution of the birds, and that shadow all convinced me that the graphic elements were bold enough to stand on their own in a monochrome presentation. I did vacillate a bit (color vs. b&w), but ultimately went down the road less taken, and was happy with the choice. What do you think?

(Photographed in Zambia while scouting for a tour last year. Red-billed Oxpeckers and Thornicroft’s Giraffe are the species.)

I like it in black and white. The choice is bold, but a good one since the elements you mention are so strong. Plus bucking the trend is nice now and again. That’s one of the reasons I liked that raven photo I bought from you so much. Ravens have a lot of color in their feathers and my one shot of one is in color for that reason, but the b&w is quite effective, too. The texture in the fur is really nice here and the birds look to be having a good day of bug nabbing.

I like the B&W a lot Max, and there are enough lines, diagonals, and shapes to support that choice. The eyes of the oxpeckers are particularly mesmerizing; they seem to be aware they’re being photographed and patiently waiting so they can get on with their business, lol.

Yes, I like this very much. As you say, the diagonal is very strong and the pattern on the giraffe’s neck are very interesting in B&W.
Beautiful image.

Nice photo, made it stop and look for sure. Very strong lines and the diagonal gives a sense of motion and that the birds are along for the ride. Something humorous about it too, but I’m likely watching too many Disney movies with my daughter (haha). But a nice story here of the connections between species.

Oh, I think the b&w works really well here. I like that you broke the “rule” about only having things in threes in a photo. I think it really works here because you cropped this to a square - everything is even (number of birds, frame split exactly in half). I also love the shadow of the second bird from the top on the giraffe.

like that you broke the “rule” about only having things in threes in a photo.

Bonnie, that’s something I’ve never heard of. Would love to hear more about the philosophy behind it, as “number of subjects” is never something that’s occurred to me in terms of a photo’s effectiveness.