I’ve been very dismissive of how well an image can be sharpened beyond the pixel level. In my experience, a soft (poorly focused) image can only be given some slight appearance of being sharper with a high-frequency contrast boost with something like the Texture slider in recent versions of LR/ACR, or possibly the High Pass technique. But it appears that motion blur on an otherwise sharp image is easier to fix.

This morning I was working on some pictures of our granddaughter and decided to try to salvage one that was still languishing as a raw file because of motion blur. Without any real hope of success I opened it in PS and pulled up the Topaz Sharpen AI filter. I clicked on Motion Blur - Very Blurry (which it was) and nearly fell off my chair. As expected, there were areas of artifacts but they were easy to deal with. I had done Denoise on a copy of the BG layer when I first brought it into PS, and then created a copy layer above that for the attempt at sharpening, so it was very easy to add a mask and use a black brush to block out the overdone areas. The original BG looked fine in them as they were very OOF areas of fine detail.

So I think I’ll be deleting fewer files in the future. This result may not be that easily repeatable, but I’ll be giving it a chance. Just posting it here as a “new discovery” – I’m sure others have had similar experiences.

Before (large enough to enlarge twice to see detail): 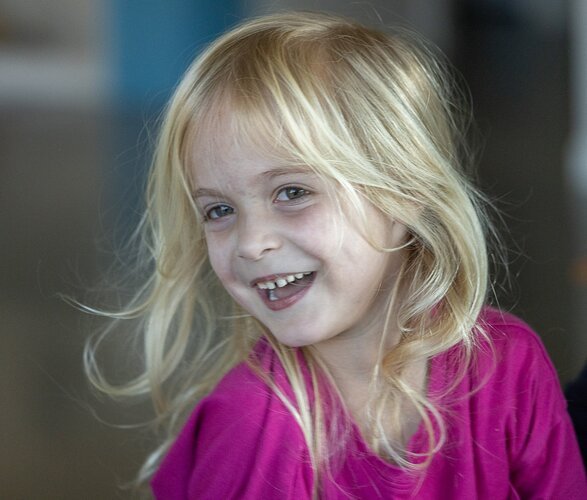 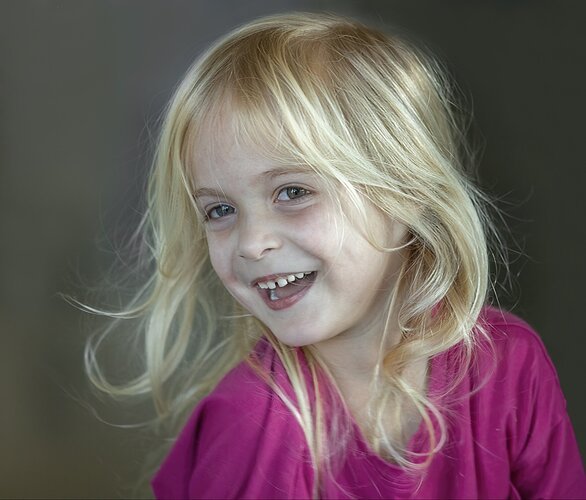 Wow, that’s absolutely amazing, Diane. I may have to open my wallet for those Topaz plugins. Incredible.

Wow is right, Diane! This is amazing! Beautiful granddaughter too!

Diane, that is an “eye-opener” for sure. So glad you were able to salvage this shot of your cute little granddaughter.

So I think I’ll be deleting fewer files in the future.

With unlimited storage options and large external drives getting cheaper every year, I have stopped trashing a lot of files because of my poor photo settings, especially with older cameras. Your experiment Diane is very revealing. Even before viewing the images in full size, the results were very noticeable. AI is really helping salvage a lot of low-resolution, noisy, and blurry images. Thanks for sharing your results.

Thanks @Diane_Miller for sharing this !
I’m shocked to see the results ! Although I’ve been using Gigapixel AI and Denoise but never tried this one.
No wonder AI is winning awards for pictures these days, photographers won’t be needed soon

Very interesting, Diane. PS had a motion blur correction some time ago, but you had to tell it the direction of motion, if I recall correctly. This looks much more practical.

Wow that is really terrific that you could do that! And she is a cutie patootie.

I use Topaz Sharpen AI and Denoise AI as plugins for Lightroom, but I suppose I could use them once I’m done with the RAW file and send it to Photoshop. I’m not sure it matters, but I was as floored as you were the first time I saw it “salvage” a soft shot. So now I use it more frequently and even on shots that are sharp, but could have some detail teased out. I think later this month Topaz will be combining Sharpen, Gigapixel and Denoise in one package the way ON1 has done from the beginning, at least with sharpening and denoising, which seems smart to me since they go hand in hand. Other than as a money-grab, I’ve never understood why Topaz didn’t have them combined to begin with.

@Kris_Smith, I found a ‘first look’ at the new Topaz Labs Photo AI, and I’m not enthusiastic about it. 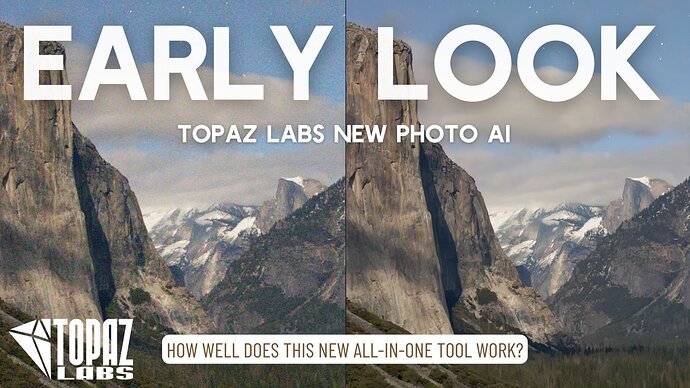 A detailed look at how well Topaz Labs new Photo AI all-in-one app holds up to the standalone versions of DeNoise AI and Sharpen AI.

Admittedly, it’s still in development but it looks like it’s an all-in-one bundle that’s aimed at lower end users and is making too many decisions for me – the sort of thing that may work in some cases but not all.

I subscribe to the KISS method. My workflow couldn’t be simpler and is as non-destructive as possible. It is admittedly “classic” in that it grew out of using PS since v4, in 1996 (8 years before I got my first digital camera), but I think classic also translates to simple, robust, and as editable as possible. I’ve used LR since v2 in 2008.

I do as much as can be done in LR Develop module (equivalent to ACR for those who don’t use LR).
I rarely do any sharpening here beyond the default, which compensates for debayering softness.

Open the raw file in PS and make a copy of the BG layer.
(This extra layer can be skipped but I like to have the original in the stack.

Run Topaz Denoise AI – as a PS plug-in – which gives me the denoised layer right in the stack.

Link all pixel layers and those that have masks to the BG to avoid inadvertent moves.

If there are areas that are too smooth, add a mask and brush over them, with low opacity if needed. This really should not be needed with the best choice of method and possible tweaking of sliders. I rarely use anything except the default slider positions for the method.

Make a copy of the Denoise layer (or if it has a mask, do a stamped layer).

Run Topaz Sharpen if needed. (I rarely need to do this.)

Add a mask and brush over any overdone areas, with low opacity if needed.

Make a copy layer (or stamp if there is a mask) and do any cloning. I often do several copy layers as I go more boldly into cloning steps, as I may find later that I’ve gone too far. I love that I can toggle layer visibility for a better look at what I’ve done and tweak as needed.

Then at the top of the stack do a stamped layer for any adjustments that need to be done on pixel layers, such as the Nik collection.

I have gone from a completely editable raw file to PS, which will have some layers from Topaz, Nik or possibly other plug-ins, and when finished I have a layered master PS file that (when I save it) goes back into the LR filmstrip next to the original raw file.

Export the finished file from LR as a JPEG sized for posting here (with a saved preset) or as needed for any other use – a TIFF or JPEG for printing or any other sharing.

Add to my web site with a simple drag and drop of the master file into the Smugmug gallery list in the Publish section of the Library module (another plug-in). That’s where I let the software set the export parameters.

I’ve tried Gigapixel for an old file I’d love to print big and it was no improvement over PS’s upsampling, which wasn’t good enough. I’ll hope for future improvements.

PS – thanks for admiring Wylie – she is as bright and capable as she is cute! She was at a falconry demonstration a year ago, at age 5 1/2 and loved it. The minimum age for handling the birds was 8 but the falconer volunteered to let her fly a Harris’s Hawk that was almost as big as she was, “because she was so cool”. She came through on the cool and got to fly a couple of other birds!

Hi Diane
Of the set of programsTopaz offers, AI is the only oneI have kept. I mainly use the brush to highlight a bird and leave the background as is. I think taking out the background, helped this photograph and AI did. Great work.
Peter

Sharpen AI is definitely improving. Initially, it really struggled with fur textures, but I’ve found that the improvements made in the past year have reduced the number of “crunchy” images I’m able to get out of it. Motion Blur - Very Noisy is the main setting I use (since it can do a nice job of applying some NR while sharpening details), but occasionally I’ll get better results with one of the other settings.

I still don’t want to use Topaz as a crutch, but I admit that after seeing some of the results, it’s opening up so many more possibilities. For example, I just processed a macaw photo taken at 12800ISO. I ran it through DeNoise Standard, which was so effective I had to reduce the opacity of the layer in order to reintroduce a bit of grain (I hate the pure glossy look that comes with a full DN blast). We’ve come a long ways since I was freaking out pushing my 20D to 800ISO.

@Max_Waugh – I remember the 20D! And I’ve re-processed a few images from it and the 5-series with today’s tools with good results. I’ve had good results with some very high ISO images, such as total lunar eclipses, with the Severe Noise algorithm. The naming of the algorithms is a little misleading as different images can be better with different ones.