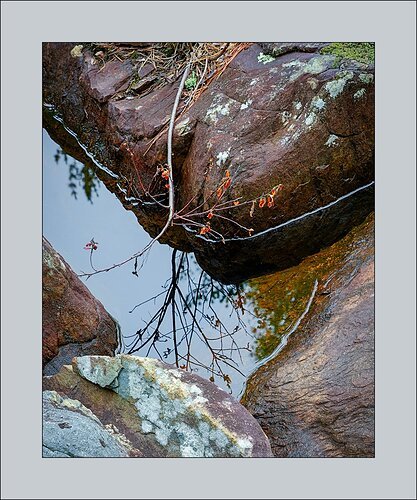 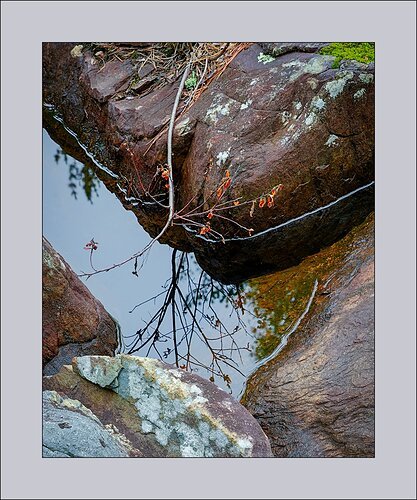 I distinctly remember taking this photograph more because of the process than the product. In the early morning I wandered back behind our campsite. There was a “rock garden” of river boulders rounded and smoothed from a millennium of water rushing over them. But now, in late August the river was mostly dried up. And so, I set up my tripod for the standard shot – camera very low, shooting out over the moistened boulders to a vista of the lake’s forested far shore. And I thought, “My God, do I really need to take this shot again?” And so, I put my camera back in its case and just started wandering around among the boulders trying to get a sense of this astounding landscape. I began to notice the pools of water between the boulders and how blue the reflected sky made the pools appear. After a while, I came upon this little scene. I was absolutely delighted by the graceful curving of the little branch and the pert upturned bud near its tip. And so, I wandered back, grabbed my camera and tripod. As I set up to take photographs, I swear I heard that little branch whisper, “I’m ready for my close up, Mr. DeMille”.
As always, I’m most interested in feedback with respect to what this picture evokes for you in terms of thoughts, feelings, or memories.

This, to me, is an excellent, a first rate image. It’s so much about seeing rather than processing. Nothing has been exaggerated for impact yet this small scene certainly has a lot of it. It’s a really sophisticated composition without the formulas we often use (layering, rule of thirds). Yet all the components hold together to give a unified and balanced result. I suppose the main interest is that graceful branch with those small leaves at it’s ends. But the arc of the waterline that crosses it, together with it’s tonality, is just as important. I just love that very small branch that rises from the main branch like a small tree. Even the pine needles at the top eventually get your interest. It’s just a delightful microcosm of nature that lifts your spirit. I see Eliot Porter all over this image. The way the reflections and light is bent at the edge of the rocks is worth paying attention to. It’s more evident in the large version. There is definitely a lot to explore and see in this small world. Good intimates are like that.

evokes for you in terms of thoughts, feelings, or memories.

I much appreciate the dialogue, and really getting to understand how you came to create this photograph. It’s always helpful in appreciating images. This will sound repetitive from me… but it is without that dialogue and more importantly the fact that it wasn’t me who was wandering around the boulders… so I lack the emotional connection to this scene. Don’t know how else to explain it.

So that leaves me critiquing an image, pictorially, without that connection. It’s certainly an excellent and well seen image. The nitpicker in me says the brighter green moss in the URC draws the eye - and in fact is the only non-earth toned color and is right on the edge of either I want to see more, or none at all. The color of the moss looks quite accurate, so altering the color isn’t the solution.

But then this type of feedback - does it result in a loss of emotional context for you as the creator?

I appreciate the writing as much as the image, Kerry. And thank you for sharing this story with us. I don’t have any critiques per se other than mentioning that there is a child-like character to the image that I really enjoy. It feels pure and not embellished (in a very good way).

@Igor_Doncov : Thanks for your very kind words. I am very fond of this image mostly for the reasons you stated. I’m not quite sure how I found the balance, mostly by following my gut, I think. What I like most about this picture is that it feels to me that I’ve pretty much eliminated the fat, which is to say, all that needs to be there, is and little more. I recently listened to Alex Noriega talking about the basis on which he critiqued images submitted for last year’s NLPA competition (not to mention his own work). It was nothing I hadn’t heard before, but it really drove home the importance of ruthlessly cutting to the bone and being as clear as possible as to the essence of an image. Whether or not this image succeeds in other ways, I can’t firmly say but I do feel it has clarity of purpose, if you see my meaning. In any case, thanks for your insights.
@Lon_Overacker :Thanks especially for you “nit pick”. In this case, I think it is far more than that - it is the sort of oversight that can drag a good image down. As you say, the bright colour is not only out of place but sits right on the corner of the frame, pulling the eye in very unintended ways. I had been aware of it and reduced the saturation considerably but not with enough intention. I have posted a rework, which is a touch brighter overall but is mostly about attending to the urc. It was a more complicated than I’d imagined. Simply reducing the saturation didn’t do the trick in terms of getting the colour tone right. I did a combination of things: reduced saturation, frequency separation, a bit of burning, and a touch of mid-tone contrast and then juggled the lot until I got to this. I want the moss to be there if you care to look but, naturally, I don’t want it to draw reader from central focus of the frame. I hope I’ve succeeded.
@Adhika_Lie : Your comment is very sweet, Adhika. I feel the same way about that little branch standing up to be seen - so small but that childlike, “look at me” is definitely there.