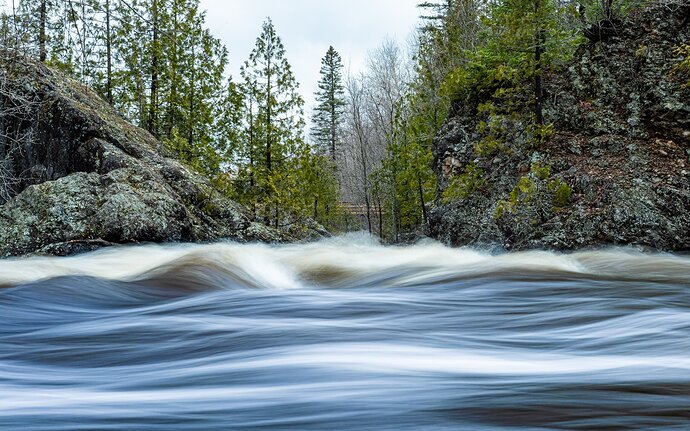 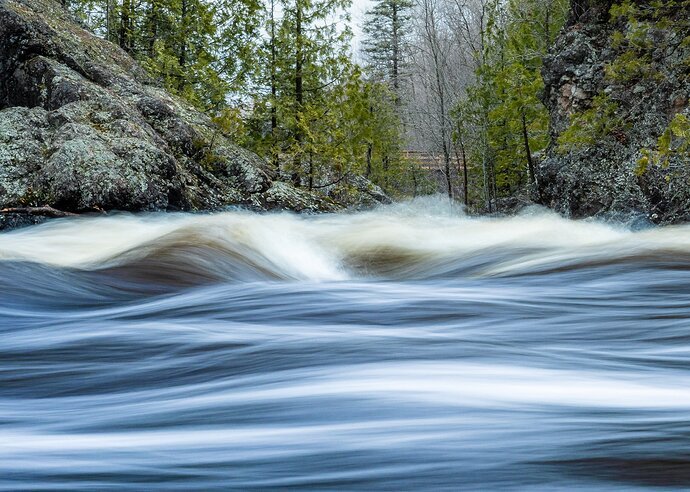 I dialed down the texture & clarity in the area above the waterline and cropped to include less rocks and trees. The bridge is just a hint in the background now. Thoughts?

Since everyone did such a great job with my kayak seclusion post, I thought I’d try some more watery goodness. This is the Tyler Forks river just below Wren Falls in northern Wisconsin. You can reach it by a series of muddy backroads or the North Country National Scenic Trail which runs from Vermont to North Dakota. Access to the falls is tricky - there are no platforms or manmade cuts for you to view them. No fences. If you fall in, well, you can see what your likely fate would be.

The river bends about 90 degrees here and goes around a giant island of rock (on the left) - through the narrow passage on the right you can see a brand new bridge over the river. It’s an incredible landscape and very, very loud. To get this shot I climbed down a slope and set up in a bunch of alder saplings on a spit of rock sticking out into the relatively calm swirl of water in the corner. The tripod is low to the ground and I held branches out of the way of the lens. The water is flowing right to left and upriver (in sight) are the falls themselves.

The power of this river is really incredible and something we don’t see often because humans like dams almost as much as beavers do. The Tyler Forks is largely left to itself and so it charges through the landscape unchallenged. What I was after here is a new view of the river (previously hard to do if not impossible since you couldn’t get to this side easily before the bridge). Although not many folks have photographed this river, so just about any image is a new view. I also wanted to showcase the tremendous force of the water itself.

So…on with the critique. Oh, if you want an unedited jpg to play with, let me know. I did quite a bit to this version.

I’ve played with this shot a bunch of times and I like what I’ve done, but am worried I dialed up the blue too much. There was open blue sky behind and above me that made a natural reflection, but I did have to hunt for the color and bring it out in post. Mostly it was overcast. Does the image speak to you? Is it interesting for itself and not just the story of getting it?

Lots of work in Lr - to - emphasize the texture and reflection in the water, bring up the luminance in the green channel, lower exposure in the sky, show the bridge a little more clearly, cropped to emphasize the water and I brought it into Ps to make a few overhanging twigs disappear.

Kristin, Amazing photo. I really like the number of layers in this. What must be a torrent in person feels amazingly peaceful.

Kristen_SmithApril_29，_2020Kristen_SmithApril_29，_2020P1034507-2-Edit|690x431 Beautiful image, Kristen. To my eye, the sharpness and deep contrast of the background is competing with the water’s softness. Just brought down both Contrast and Clarity as well as highlights in the background and brought up both the tint as well as the temperature just a tad. The water I brought down the Clarity and saturation, and just added a little vignette to the whole. Just a quick edit. Nicely seen. 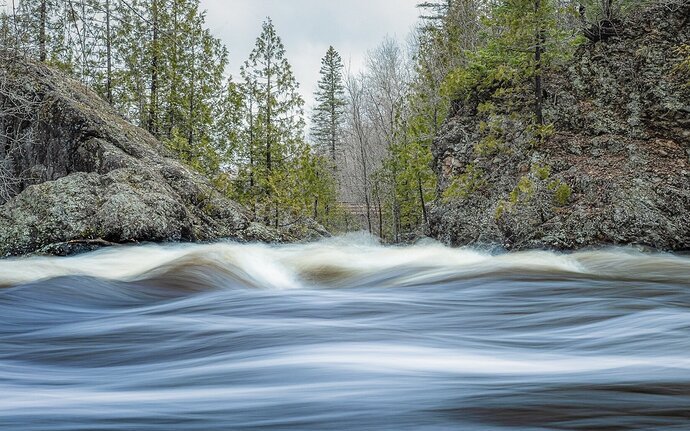 Thanks @Mario_Cornacchione & @j113 - thanks for the kind words and the rework. I’ll sit with it for a while & see if it takes. I see what you mean about the competition…hmmm…

Looking at it again, I might have brought down the Clarity and Contrast just a bit too much in the background. But I think you get the idea; find a middle ground where neither is too overpowering

I certainly think that you have an interesting image here and the processing doesnt bother me too much at all. I think the blues you mentioned have been controlled well. I especially like the tones and conrast in the water. It also contrasts nicely with the upper half of the image. If anything, I would agree that the contrast in the upper half could be dropped and softened a but to complement the water a bit more.

My main cc is around the composition. I feel that the center third of the image holds your attention well an tells 90% of the story. The right third and less so the left third feel very full of rock and this detracts from the main beauty of the water. You could consider a 4:5 or even 1:1 crop to bring your attention to the center a bit more. Ive done some crops below just to demonstrate my thoughts: 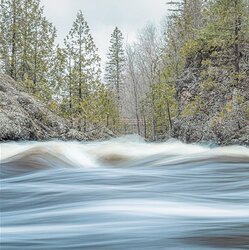 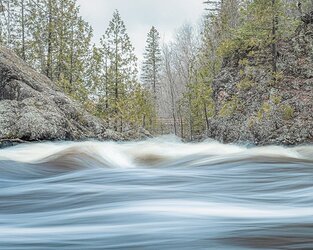 Hm…more food for thought. I’ll play with some softening and crops, thanks @Eugene_Theron.