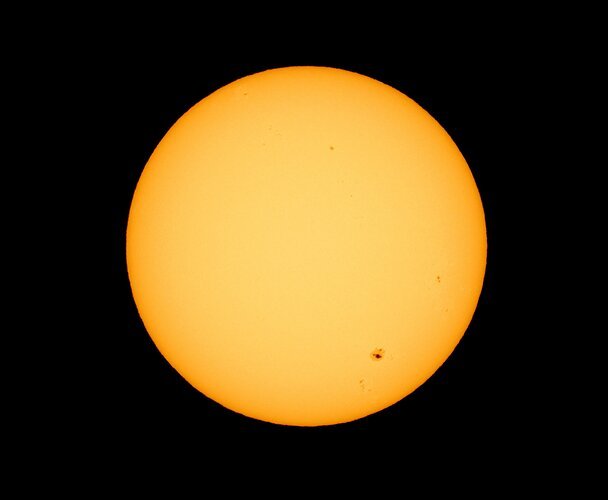 I’ve been busy again (need to quit doing that) and decided the current large sunspot (moving quickly out of view toward about 4:30) would be a good excuse to try to remember where I put my camera.

I always just toss things out for any comments anyone feels like making.

Only minor tonal slider tweaks in LR. Cropped to 22% of the full frame. Solar filter. Solar finder needed to even get it in the frame.

Loots great, Diane. The sun has been active for a while now. I downloaded the image to see if curves in PS could be used to reduce the light in the middle. Basically, I put in 2 points on the curve, one on the edge where it was darker and one in the middle. Then lowered the middle point. It kind of worked but didn’t look right so maybe it didn’t work. I have always had trouble with the center light on the sun. You did pretty good actually, I just noticed that the edges were darker but that is the nature of the filter.

Looks like the focus was good, not sure how the seeing conditions were which can soften the focus. I would like to get back into taking photos of the sun again.

Thanks, @Dean_Salman! I have a lot of leeway on tonalities in LR – tried to add just a bit of drama without overdoing it. CN forecast says seeing wasn’t great – a bit of a breeze today. But it’s a short exposure.

The edge detail is pretty sharp. Here’s a 100% screenshot. 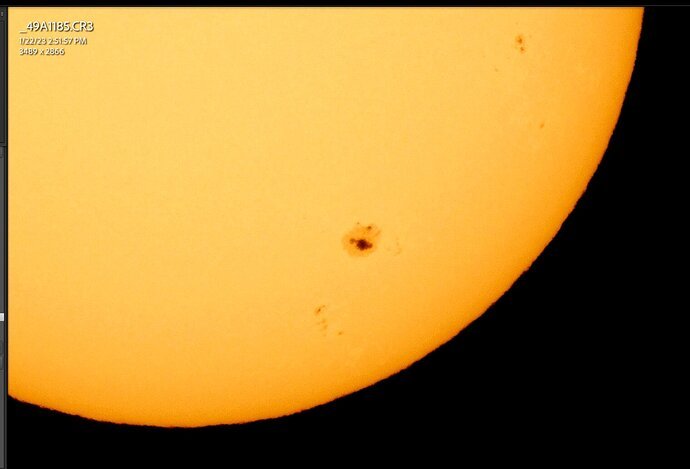 For general interest, the sunspot is big enough to swallow several Earths.

I am blown away by the idea of making this kind of picture. Solar filter? Solar finder? Solar flares I get, but beyond that it’s just arcane language of a secret rite.

Not really, but it all sounds so mysterious and I love that about areas of photography that I know nothing about. Brava for getting and bringing this to us. Sharing the wonder of nature is where it’s at for me sometimes. Glad that sunspot is far, far away!