To face the day +1 rework 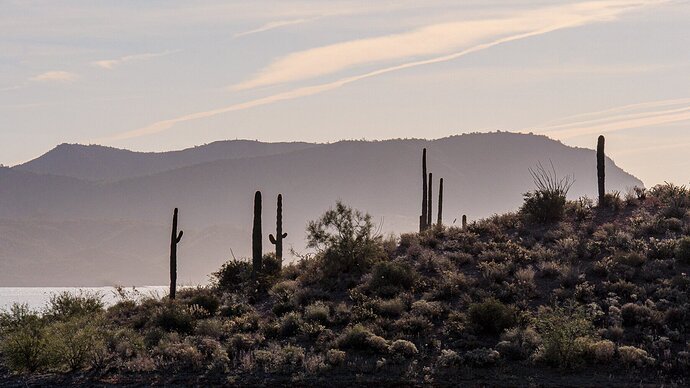 Another shot in the morning waiting for Ted in the Lake Pleasant boat launch area. It was really hazy and I liked the effect in the hills immediately on the lakeshore and in the distance. Not sure if it’s pollution or fires or what, but it didn’t last beyond the morning. This group of cactuses and bushes seemed especially interesting and so I shot a few frames hoping I could do something with them in post. At first I was really flummoxed about how to process it, but the TK8 panels helped turn it into something reasonable.

Does it work at all? It really was hazy and weird, so I tried to preserve that, but also add in some contrast so it wasn’t muddy. 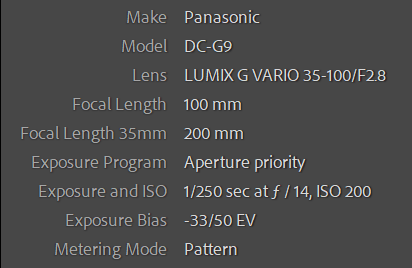 Lr for initial RAW processing - shadows and whites increased, texture & clarity added, blacks & highlights reduced. Photoshop for dust spot removal, a lot of luminosity masking to tease out the shadow detail in the hill, edge mask to bring up the texture and highlights in the bushes, dodge & burn in the far hills to give a tiny bit more separation, but those are mostly as they actually were. Lr for a final crop to eliminate a bit of land in the left side of the photo.

Looks like challenging shooting conditions; those shadows are almost coming directly at the camera. I like how that leads to such a contrast in the foreground. The long diagonal broken by the cacti and brush works well too, as does the hazy background. I sure wish contrails didn’t bug me so much, they can be hard to get away from some days.

Thanks John. It was challenge for sure and I almost didn’t bother, but then I thought what the heck, it’s only 1s and 0s. And so I was able to do something in the end.

I sure wish contrails didn’t bug me so much, they can be hard to get away from some days.

You should see the sky just to the right of this - what I was originally aiming for - it’s 10 x worse being closer to the Phoenix airport fly patterns.

Very nice! The haze and backlight create an interesting image, and the processing works well to emphasize the conditions. I don’t remember even seeing this, or a similar scene.

It probably could be successful to replace the sky by removing the “clouds” and crop out about half of it. Might be the first time somebody ever replaced a sky with a featureless one.

Thanks @Diane_Miller - it was just to the right of the boat ramps.

Yeah, the sky wasn’t great. I considered cropping more, but then thought I’d let other folks tell me if the sky was as bad as I thought. You know how it is when you get fixated on one part of your picture.