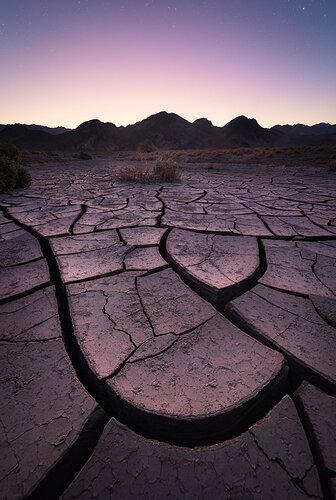 One of the ‘must find’ locations for my second visit to Death Valley were the ‘big’ mud cracks that evaded my discovery two years ago. Thanks to a couple tips and a couple miles of wandering across the flats I finally found this location and pinned it for a return shoot at dawn. After nearly rolling my ankle on the walk out and cursing the lack of clouds for yet another day, I set aside ‘expectations’ and made the most of the morning I had.

All feedback welcome, I’m most interested in ideas in how to handle the rather dark stretch across the mountain ridge which several people I’ve had review so far have made note of. The balance of shadow vs detail in strong back-light situations always frustrates me.

This is a 5-frame focus stack (apparently I needed 6 to get the nearest edges sharp) with a 6th darker exposure masked over for the mountains and sky. One final earlier exposure from the same night/location was stacked in to add the few stars (which I’m on the fence about keeping as well)

Cool image. I like the repetition of all those arcs and wedges. Some suggestions: (1) shoot this just before the sun goes down so that those warped mud edges are outlined with sunlight. (2) bring out the stars a bit more. (3) there is a overall purple cast to this image which you could play with by shifting it toward yellow. (4) lift the darks in the distant mountains while keeping the cracks black.

I might just raise the exposure just a tad of everything below the horizon. That may bring out the texture in the mud itself which actually has a lot of detail.

Great image, Jon! I really like the strong curves and the color. It’s really moody. It would be great if you could bring out the texture in the mud as Igor suggest. I also wonder what it would look like cropped to the top of the mountains and just to the right of the bush on the left.

Jon, all of your effort looks to have paid off nicely. This is a nicely inviting image with its combination of mud cracks and earth glow in the sky. The color match between the reflected light and the sky works very well. I think the distant mountains have the right amount of texture. It’s there, but you need to work to see it. That seems right for the time of day that this shows. The stars are an interesting touch but this would work well without them. I don’t notice the loss of sharpness at the bottom, it lets that big tongue of mud be the main focus.

A really neat image, you provide a great example of making lemonade with a cloudless sky. The in your face composition and the wonderful twilight colors have a lot of impact. The arrangement of the cracks can’t be much better than this, it looks very well thought out. I would not fret over the sharpness of the near foreground. It’s barely noticeable anyways, and because the “softer” section is significantly vignetted, and adjacent to a very bright sharp section of cracks, no one is going to notice it.

As you have already pointed out, the dark mountains could be tweaked to show more detail. Maybe I’ve gotten so used to seeing realistic looking high dynamic range scenes thanks to the use of luminosity masks, but subjectively could see having more detail in those mountains, and the distant cracks immediately below the mountains, You said you used the same darker exposure bracket to blend in the mountain and sky. I might have tried to use that bracket for sky only, and blend the mountain in from one of the brighter exposures. It’s always easier to burn that down, than to try to lift shadows significantly in the mountain. Here is a rework where I took a stab at lighting the mountain using a TK Luminosity Mask D2-D5. This lifts shadows, while still retaining some contrast. 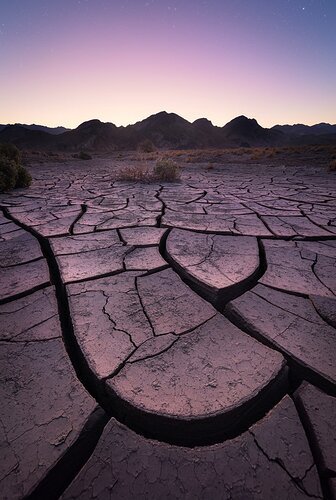 Lacking clouds can be annoying, but a nice gradient like here looks great as well! The mudtiles you found are presented beautifully, I like the details in them. The sharpness drop in the direct fg will show in a large print, but is not very bothersome in this webviewing. I like what @Ed_McGuirk did to the shadows in the transition zone, looks very natural. I guess it’s personal taste how much details you want there and they are tricky to balance. The stars work for me here, they just show that you’re coming out of the night and the touch of blue looks good on the upper edges.

I love the image. I’m a big fan of wide angle landscapes, so these shots have to contain an interesting, well-defined, well-composed foreground. You have that here. Personally, I am also a fan of (!) cloudless skies. As a minimalist those gradated skies provide just enough colorful, negative space. I, too, have shot many back lit landscapes, and the high dynamic range is tough to deal with. Strong ND filters, low exposure comp, and boosted shadows in post have always been my compromise. In any case, I think the image is awesome!

Thank you everyone for your great responses, I have a lot of ideas and feedback consider and work with. I went back and reviewed my RAW files again and I do think I have a solid infinity focus frame I can use to blend more detail into those mountains without excessive noise (the main reason I went more silhouetted). I’ll try to circle back to this edit early this week and post an updated version soon here.

I went back and reviewed my RAW files again and I do think I have a solid infinity focus frame I can use to blend more detail into those mountains without excessive noise (the main reason I went more silhouetted).

Unless you plan on printing this image very large and need extreme detail, my opinion would be that using a brighter exposure to blend the mountain in is more important than using an infinity focus from the sky. Any brighter focal bracket focused near that bush will still give you plenty of detail in the mountain. The mountain is so distant, it does not need to be as tack sharp as the U-shaped crack, IMO. 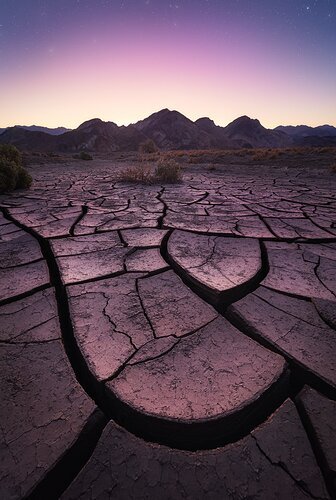 50% rework, a fair bit happier with this outcome. A bit more contrast where I wanted it, a bit more detail where it was needed. Thank you everyone for your feedback, it came in great use while working this over again.

I like your last re-work best. Great comp. I was in DV in 2013. What a super place, and you did a great job of finding photogenic cracks, and making the most of the light. As someone said, when there are no clouds, the gradient in the sky can be a good thing, and I really like what you did with it in your re-work image. The colors seems to have changed a bit in that, too, and I like the slight emphasis on a bit more pink in the bright part of the sky, fading to blue in the darker part. And, good job on bringing out some more detail in the mountains. Lovely.

This is really nice. I especially love the inclusion of the stars at the very top!

@GennyK, thank you. The re-work started all the way back at the focus stack with an additional frame that I found that was focused at infinity that matched the exposure of all the foreground shots that I had missed the first time. Thankfully I save a TIFF file with my entire stack of layers for each edit so I was able to duplicate those over to the new edit and just have to rebuild/tweak the luminosity masks where they didn’t match up well on the new file. Certainly saved a little time and was able to generally end up in the same general neighborhood of look/feel from the first run with the desired improvements added in.