A snowy morning in the park... 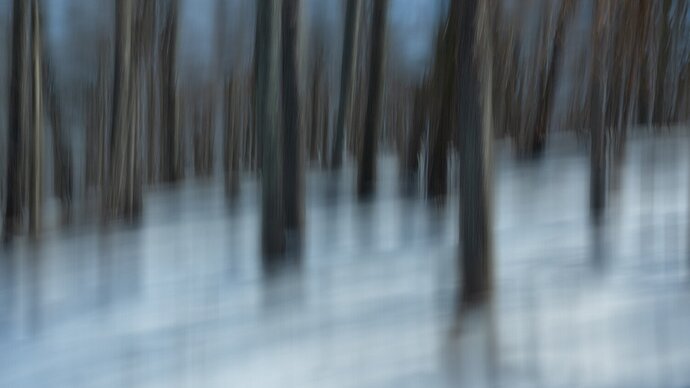 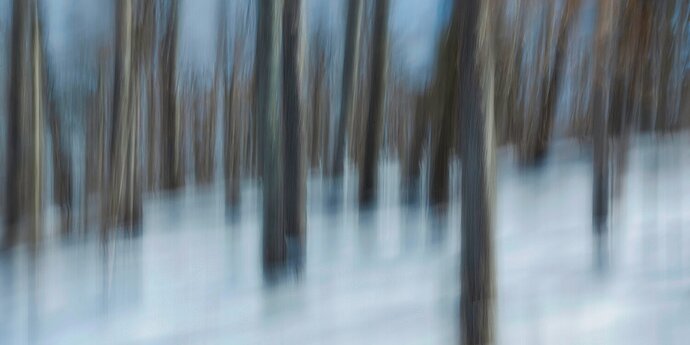 This one is from last winter. We had experienced a minor snowstorm just deep enough to cover the grass, so ventured to the nearest state park. Though I was able to capture several ‘keepers’ from the session, this one had the most appeal to me.

The aspects that appeal to me result from the camera movement…

I’m not sure what I would do to improve this. Not to imply that it couldn’t be improved, I’m just not sure what approach I might take. I believe I’ve described above what appeals to be about this one.

Edit: After looking at this one online and reading the comments thus far, I thought this one needed some redo. I did crop a bit off the bottom per Lon’s suggestion. But I also thought the woodlands area towards the top looked a bit ‘muddy’ and overall, it just looked a little darker than was my intent. Dunno if this is radically different, but it gave it a bit extra ‘elbow room’ I think.

Hi RJ
I feel a cold rush when I see this. The horizontal white snow(?) gives the rushed feeling. The fuzzy vertical tree trunks contribute to the feeling that I’m in a blowing snow storm. It’s cold too!

Technical question: how did you get the horizontal movement and vertical ICM movement all in the same shot? I e seen others like this and don’t quite get how it’s done!

Wonderful image, RJ. It does feel cold to me. I also get a wonderful feeling of walking through a snow covered forest. Very cool. Nothing I can see that would improve this. Thanks for sharing.

Good eye picking up the directional aspects. For this one, the ICM was a straight up camera movement (possibly straight down, but I rarely do that so think it’s more likely up). And then in post processing I applied either a path blur or motion blur to soften up some of the skinnier saplings in the scene as well as accentuate the horizontal ‘rush’ . And then masked out areas where I didn’t want the horizontal blur to impact the scene.

There seem to be a variety of paths to achieve this or similar effects. I know there are people who are shooting different camera movements of the same scene and then layering them up in PS with different blend modes. One could achieve movement occurring in a variety of directions with that approach. And I’ve also seen a few people doing some very creative in camera multiple exposures to achieve motion variety. And apparently their cameras have some ‘blend modes’ built into the camera itself to assist in the end result creation.

Beautiful energy and movement in this, RJ. Thanks also for your explanation on the process you used/created. I am curious about how you got an ISO of 31? On my Nikon Z6 I can set a low ISO but I don’t get a choice of how low. Just wondering. Nicely done photo.

I am curious about how you got an ISO of 31?

That is a bit odd, isn’t it. Not sure if this is applicable to any camera other than the D810, but the lowest ISO # I can select on the camera itself is ISO64. But…there are choices lower than that available. They’re displayed as ‘LO 0.3’, ‘LO 0.7’, & ‘LO 1.0’. An actual ‘number’ isn’t available for these in the camera. But when I look at the ISO Speed Rating value in the LR metadata, the ‘LO 0.7’ (or whatever) is translated to a numeric value. Don’t quote me on this, but I think the possibilities are ISO50, ISO31, annndddd…umm, I forget what the 3rd option is.

Thanks, JR. I didn’t realize that in post processing an actual value would be assigned to those low ISO numbers. Good to know.

I like this quite a lot. Great use of the ICM AND further exploring motion blur in post. (Has me thinking…

) I’ve mentioned getting more than one movement in a single exposure, but that non-vertical movement woulld have impacted the upper vertical trees here - so I think what you did here works quite nicely.

You mentioned just enough snow to cover the grass - but sure looks like a lot more snow with the motion blur! I also like having a bit of the blue sky up top; makes for a nice color image.

I like the combination of movements. The trees look really good. The only suggestion I have - and I know you’re already happy, so take this with a grain of salt… but having the horizontal movement really lends this image to more of a pano crop for some reason. I could see cropping from the bottom to eliminate the “wishbone” bottom of the forward tree. there’s still plenty of snow and horizontal movement leftover. Anyway, just an alternative thought.

Certainly more artistic value than emotional for me; especially with abstracts and ICM’s.

That ‘wishbone’ hadn’t fazed me until you mentioned it. Then I couldn’t unsee it.

Interesting suggestion for the crop as I had already cropped to a 16x9. But taking it to 2X1 did ease getting rid of the wishbone. I thought it might also accentuate the sense of the horizontal motion a bit, but not sure that worked out.

In addition, I’d noticed a couple aspects of it that hadn’t grabbed my attention until I looked at it online, so there’s a rework included in the original post.

Wonderful image, RJ. It does feel cold to me. I also get a wonderful feeling of walking through a snow covered forest. Very cool. Nothing I can see that would improve this. Thanks for sharing.

…tion for the crop as I had already cropped to a 16x9. But taking it to 2X1 did ease getting rid of the wishbone. I thought it might also accentuate the sense of the horizontal motion a bit, but not sure that worked out.In addition, I’d noticed a couple aspects of it that hadn’t grabbed my attention until I looked at it online, so there’s a rework included in the original post.Thanks for the comment!

RJ, first, thanks for taking the time to consider the suggestion and rework.

Often times, I find that I am wrong… I should have taken the time to work and post. The “wishbone” was a bit picky, but I’ll stick with my initial thought. However, IMHO, the crop induced a new problem, which is the same issue that plagued my “Blizzard 22” image. That lone tree is now cut off a bit abruptly - AND no longer congruent with the rest of the trees. So I think I was wrong in the crop suggestion. Instead, some creative cloning, painting and otherwise trying to mitigate the wishbone without losing anything else.

I also notice your additional edits - and I like what you’ve done with the top. Not sure exactly what you did, so not sure if I replicated, but it’s similar. I think the room below that main tree works better than the crop. What do you think? I think more time could be spent doing a better job than I did, but I tried to retain some of that horizontal motion as well. 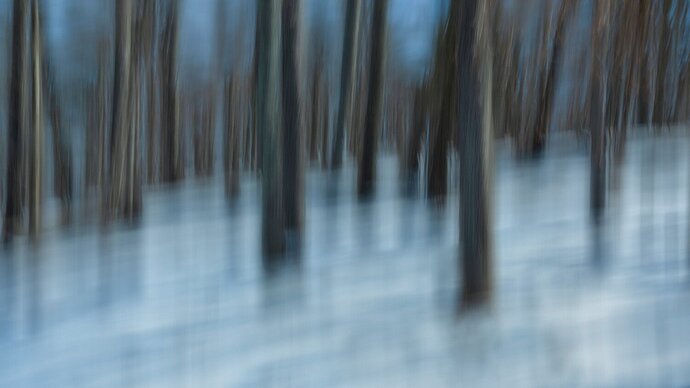 I do appreciate you following along a bunch. But I’m not sure I see the nearest tree as a problem. If it were considerably closer to either the left or right edge, it would be different (for me). That would feel more like the side to which it’s closest were being cut off and just wasted space. But this is sufficiently far away from either edge that I don’t get that vibe from it. In fact, it sort of has the feel of anchoring the composition.

I actually tried something similar with it as you’ve done and wasn’t terribly wild about my attempt as it began to feel like the entire upper portion of the image was starting to float away.

Interesting discussion with plenty of food for thought, and I’ll take a look at it again in a couple days to see if strikes a different chord with me.

No worries! Thanks for the discussion. In the end. we each must be happy with our own work.

RJ, this is a fascinating image and I also enjoyed reading the input from the other members. Well done with this ICM.

To me, the image conveys a cold morning with a heavy fog swirling around the forest. I like the combination of vertical and horizontal movement in the image. One way to create more depth is to progressively lighten the background trees while keeping the foreground trees a bit darker.

To me, the image conveys a cold morning with a heavy fog swirling around the forest. I like the combination of vertical and horizontal movement in the image. One way to create more depth is to progressively lighten the background trees while keeping the foreground trees a bit darker.

Thanks for the kind comment and suggestion. I hadn’t really thought about trying to create more depth, but it’s an interesting concept I may have to play around with.

And yes, discussion is interesting. Almost always is for me. But I’m a bit wacky that way. Discussing image making is only somewhat less fun than making images.