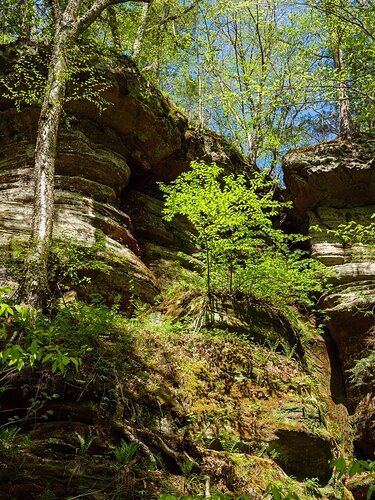 In May I went on a naturalist outing to one of the only preserved coulees in the Driftless area. Most of it is now farmland and even though cliffs like this can’t be farmed directly, they suffer from run off and isolation. In this little area there are rare and protected species that are almost unknown elsewhere in Wisconsin.

So…I was with a group and couldn’t take a lot of time with making images and the light was what it was. This is a State Natural Area (we have about 600 of them) and doesn’t have trails (most of them don’t) and is over 2 hours away so going back is inconvenient. I tried to work with the light , harsh though it was and come up with something acceptable to show a bit of the landscape down in the gorge. This little tree seemed like a good way to do that.

Does it work or is it just suffering under blue skies? How would you shoot this differently or what strategies do you employ with ‘bad’ light and limited shooting time? Would you bother?

Lr processed to even out exposure on the different surfaces, lens correction, texture & color panel work as well as sharpening & nr.

Kristin
I really like the interplay of that ledge and the tree. TME the bottom 1/6th or so is distracting, I would crop it out. I think you did a terrific job with the lighting you had to work with. Also like the wide lens perspective

Thanks Mario…so cut that dark area under the boulder? Now you point it out, I think you’re right.

Does it work or is it just suffering under blue skies? How would you shoot this differently or what strategies do you employ with ‘bad’ light and limited shooting time?

It is what it is, given the harsh mid-day light. I think you processed it about as well as possible given these conditions. One common approach to this type of harsh light is a B&W conversion, since it usually takes contrast better than color does. But surprisingly, when I tried reworking this in B&W, I couldn’t come up with anything that looked better than the color version. In particular, the sky “disappeared” in B&W.

In terms of this color image, I agree with @Mario_Cornacchione , teh bottom 1/6 of the image is to chaotic and could be cropped away. I think the shadowed area in the LLC is not adding much to the image.

In particular, the sky “disappeared” in B&W.

Thanks for the input, Ed. It’s funny how often this happens with B&W conversions.

I put another image in the OP, this time with a crop.

The cropped rework is the ticket for me…

The crop is a definite improvement. Kudos to Mario for seeing that it would be for I certainly didn’t see that. The image strikes me as being busy and much of that can be attributed to the harsh light everyone mentions.