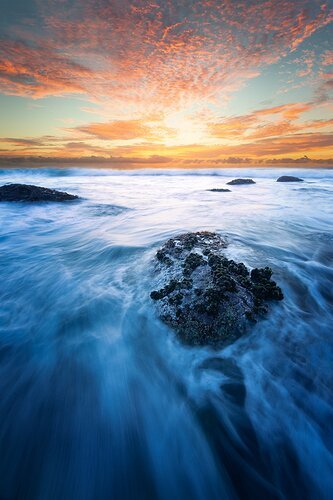 I’d really love some help with the composition & also techniques to help tie in the colours as this is a composite.

PS - I used tk actions to target & mask out the sky in the foreground shot then manually masked out some more near the horizon, selectively masked highlights & used a brush in soft light mode to dodge & burn.

Hey Dale, a couple ideas based on your comments:

By doing the above with the gradient you should be able to add some warmth by adding a sense of reflected color from the sky.

Nice job on the blend.

Great work Dale! I really like the warm and cold cohesion in this image. I also think this image could benefit from a small crop on the bottom. I agree that you could add a bit more warmth to the water in the foreground as to me it looks a bit too cool for the sky that’s behind it. I think the rock looks great the way it is and leaving that as your cool anchor point could help bridge the gap between cool to warm along with the gradient that Michael suggested.

I liked the shot as presented, but think @Michael_Rung and @David_Nilsen offer some fine suggestions to make the shot even better. I’m a PS idiot so I personally cant offer any techniques there.

I think you did an excellent job as presented. I do think that this image has great potential for interpretation as well.

First, the composition. I like what you saw and where you’re going with both the surf and the sky drawing the viewer in (I wouldn’t say we’re being drawn TO something, but the viewer is most certainly being pulled in - which is good.) The hard part here is that you have two competing interests - the fabulous sky AND the dynamic surf. The main sea-life covered rock makes for a great anchor and I really like the motion in the water. Any suggestion of cropping the bottom only takes this more towards a 50/50 comp, not helping. I think the call needs to be made which is more important, the sky or the surf. Again, cropping the bottom isn’t an option for me - which leaves cropping the sky. Blasphemy! The sky is gorgeous, why would you crop it? The only reason for me is balance and letting the viewer know what the MAIN subject is - not ping-ponging between two beautiful elements.

Second opportunity is the processing. I think what you presented works very well, so what I’m offering is just an alternative and ideas. The orange, pinks, and lavenders look perfect. To me, the combo of blue and yellow in the open part of the sky are resulting in a greenish cast. I think there’s some color tweaks you could make in the sky. The other part is the bright area of the surf that has lost most of it’s detail. It’s very bright, but also I’m thinking there must have been some reflected color from the sky? At least in the smooth, shiny area below the wave line to the top of the main rock.
This was really crude, but basically I opened up an empty layer. Turned the opacity down to like 20% and selected a soft brush also about 25% opacity. Then, using the color picker, selected a more yellow/orange color and lightly painted down the center of the bright water, quasi reflecting the lighter colors around the sun reflecting in the water. Then moving outwards in the water painting with other colors, orange, lavender; freely painting at low opacity to add a hint of color. (I’ve left the layer opacity a bit higher to illustrate - and I know I haven’t done very well in color selection, but wanted to show the concept.) Finally, I left the bottom part of the water untouched with the assumption less sunlight was reaching there and there would be more dark blue light directly overhead influencing the cooler tones at the bottom.

From your comments, sounds like you’re pretty familiar with masking, painting and all that. Here, rather than dodging and burning for brightness, I basically dodged and burned with color. And as much as I hated cropping the sky, I think the composition is a bit better balanced. 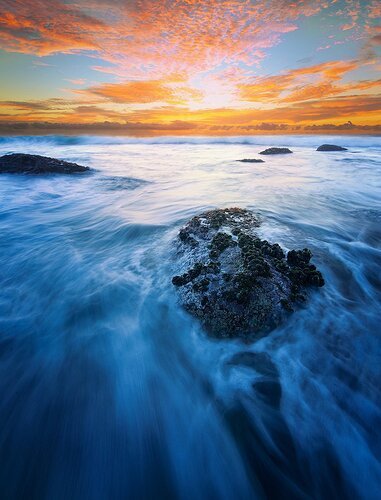 ps. I see in the reflected colors, I didn’t account for the cool blues mixing with the painted colors - so the colors aren’t right, but the idea is there.

I like the dynamic nature of the surf and the patterns in the clouds. I can see why you wanted to put the two images together. To me the colour difference in the sky and the water looks a bit unnatural.

For example some of the clear parts of the sky are cyan and green while the shadows in the water are a deeper blue and much more saturated. The darker water is by far the most saturated part of the image and I imagine that the reddish clouds would be most saturated when you were at the scene.

I had a go at balancing the colours to give the image more of a red/cyan complimentary colour feel and hopefully the colour of the water and the sky match better. I also lowered the luminosity of the white water so that it’s not as bright as the sky. My interpretation is crude but hopefully gives you another option. 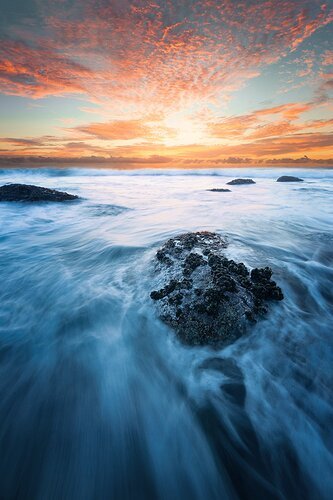