Couldn’t think of a better title for this. I liked the juxtaposition of the solid blue sky against the curves and warm tones of the hills. Taken after hiking into Golden Canyon.

What technical feedback would you like if any? Any and all.

What artistic feedback would you like if any? Any and all. 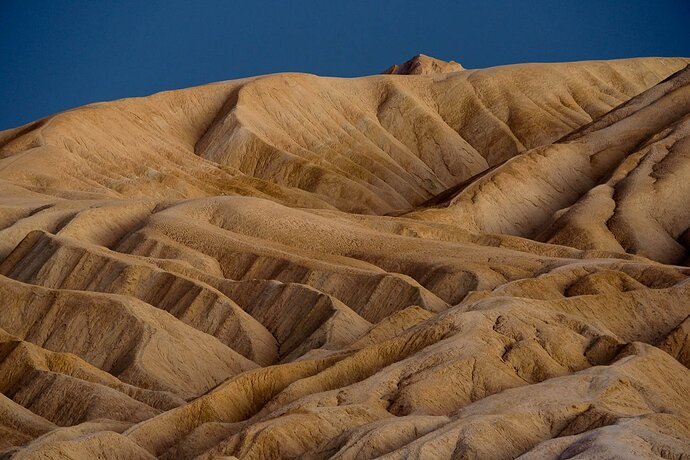 Richard, I love this composition. In my own work I have been struggling with the concept that I have heard from many teachers, that the sky can’t be darker than the land, unless of course there are big clouds and shadows. The line of thinking goes that it just doesn’t look realistic because its not physically possible. Yet, Ansel Adams, in black and white, often made his skies much darker than “real”. I think we are all used to that look in black and white, but I am not used to it in color. The struggle that I mention is that sometimes darkening the sky to the point that it is not “real” looks more pleasing. This is a longwinded way of saying I think it would be a better photo if the sky was less dark. And I might suggest increasing the highlights in the rocks. Also, I don’t understand the aperture and ISO choices. There is a lot of noise in the sky, so why ISO 800? And if you were on a tripod, why such a wide open aperture? All that being said, it is a great photo as is!

I really like the patterns and rich color in the landscape. Also the flow of the patterns in the overall composition is very pleasing. I think you’ve handled the color/saturation and soft contrast lighting quite well.

I do think Tony has raised some interesting points about the sky. I couldn’t quite put my finger on it. I was thinking before his comments that something seemed a little not right with the sky - but not so far away that I could think of what to say. But now that it’s come out, it makes me wonder because I don’t see any direct light on the landscape - like this is when the sun was below the horizon, OR behind a big, big cloud; yet the sky might not be that color during that time of the day? Just not sure.
You’ve also got a little vignetting going on, possibly from the lens at f/4.5?

I certainly do like the warm/cool contrast you have here.

Tony and Lon: thanks for your detailed comments. I’ve added a re-post which addresses the vignetting, which I obviously missed. I’m at a loss to remember why I chose such a wide open aperture, but it did provide a reasonable depth of field. An exif check shows that this was taken early morning prior to sunrise, thus the dark sky in the original. The re-post also shows a lightened sky. Actually, I like it either way, with the dark sky version being more in contrast to the warm tones of the hills. The appeal of the photo to me was that it could be seen as an abstract rather than a landscape scene. Thanks again for your comments. Richard 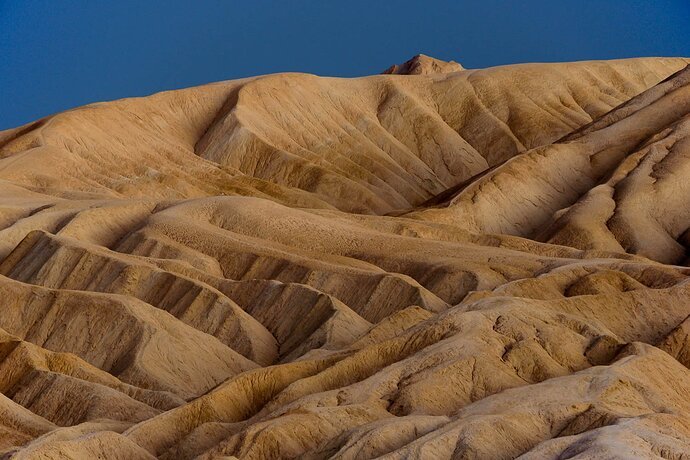 Thanks for taking the time to repost. The blue sky certainly looks much better. Especially the evenness and taking care of the vignetting.

Thanks for the additional details of the time of day, etc. Now that I think on it, I’m trying to picture what a sky would look like before the sun came up, clear skies, etc. And honestly, I can’t picture it - other than thinking now that there is usually some color with the earth’s shadow? I dunno. But certainly the repost is an improvement, at least for me.