I’m afraid this image isn’t really self-explanatory, but it’s about the past in several ways. I live on a Glacial outwash prairie and volunteer on a preserve next to us on a regular basis. The prairies are temporary landscape features created by highly porous gravel bars and poor soil left by the glaciers and outwash rivers. Left to themselves, they become forest, but the native Americans burned them and adjacent land that was better for hunting and edible plants, thus maintaining the prairie ecosystem. With European settlement, the fires ceased and the Douglas fir started coming in, aided and abetted by Scotch (or Scot’s) Broom which forms a dominant monoculture. Additional loss was due to agriculture and development.

From 150,000 acres, there are now a maximum of 15,000 acres of prairie in this area, most of it in bad condition. Work started on this preserve a bit over 20 years ago and it’s doing pretty well.

The main subject of this image is a Glacial Erratic (a boulder carried down on the ice sheet) slowly being eroded by moss and lichen. It has an old high school class number slowly disappearing from the side. The dead shrubs in the background are the remains of Scotch Broom left after a controlled burn the previous summer.

Sorry for the long winded explanation. 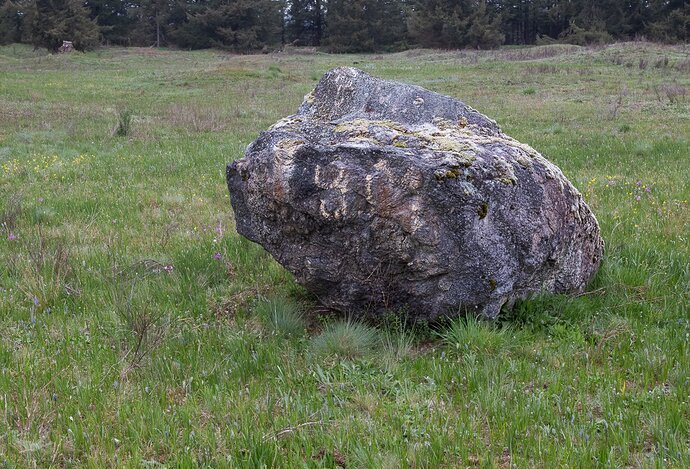 Dennis: Great story and a fine image to support it. I enjoy both very much.>=))>

Dennis, this prairie looks great, with a fine collection of wildflowers. The erratic and the trees at the top, along with your narrative tell an important story. For me, scenes like this and the story behind them are important elements in showing that the “hand-of-man” in almost always present in any natural system.