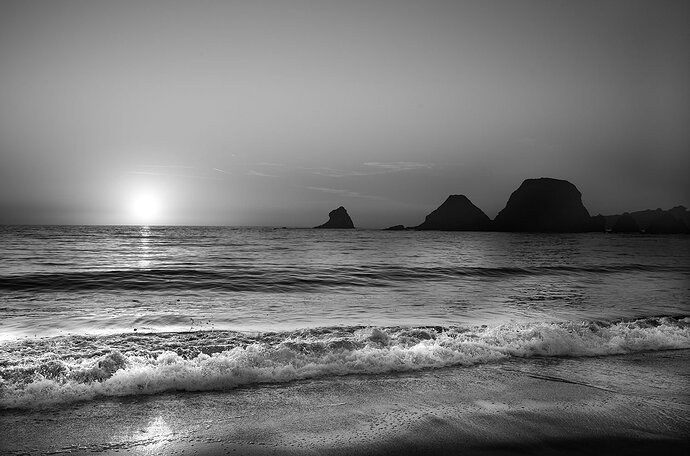 This was taken in Elk, California which is twenty or so miles south of Mendocino on the coast. We were staying at an inn that had a walking path down to the beach. As sunset approached, I grabbed my Leica Monochrom and my wife and I headed down. There were no clouds in the sky so I knew orangy clouds weren’t in the offing. I wanted to use the soft light to take some intimate landscapes of logs, rocks, flora, and such. But as the sun set, I decided to take some of the setting sun as it approached the horizon. I wanted to get the waves in the shot and the silhouettes of the rocks off to the side. I have to say, I have never really seen a black and white version of a picture like this, so I was pleasantly surprised with the results.

This was taken hand-held (as are most of my shots). Do you think using a tripod with a 1/4 sec exposure and making the waves more creamy would add to this shot or is that not needed?

Very cool camera, David. One that I’ve always wanted to get…along with the Summicron 35mm. Great image too. The Leica Mono does a great job with B&W images. I like this although the horizon is pretty much dead center…you might be able to lose a bit of the sky. But that also is some nice negative space grounding the image…sorry, just rambling here…

Using a tripod would have created a completely different image. Not necessarily better, just different. I personally like the frozen action of the water you got with your shutter speed.

Thanks David. Yeah, I played around with different crops but found that the balance was off on this particular picture if I left too much sky off. Weird how that works in some pics. Agreed about the tripod. Somehow the frozen water adds to the overall feel of the image.

It’s refreshing to see the water frozen in time. It’s so rare these days. Virtually everyone now shoots the surf slowly.

I like the contrast between the bright highlights and in the setting sun (as well as the reflection in the water) and the dark shadows of the sea-stacks. This creates a point - counter-point relationship between the two elements. The shutter speed for the water works for me as well. A longer shutter speed would have created a different mood. In that case the smoothness in the water might have better complimented the mostly featureless sky. About that sky, it does take up a lot of real-estate in the frame and it creates a lot of negative space. Although this is not detrimental to the impact of the image I think I would suggest moving the horizon line up to the upper third of the frame and getting in closer to the foreground to accentuate the texture of the sand and waves.

It’s refreshing to see the water frozen in time. It’s so rare these days. Virtually everyone now shoots the surf slowly.

Thanks for the feedback, Brian. I totally get your point about the sky, but for this particular image, for myself, I like the amount of negative space in the sky.

Love this! Not only is it refreshing to see the faster shutter speed on water as Igor points out, but it’s certainly out of the box to shoot an ocean sunset - not in color! This is a great application and use of b&w.

The contrasts are especially nice. The contrast between the incoming wave and the dark sand, the highlights in the wave/wet sand from the setting sun, and even the line of the secondary wave.

And to the point and emphasis of the foreground water/wave/beach and lack of interest in the sky, I’d be incline to crop some off the sky. If anything, this would take the composition a bit more out of a 50/50 comp. The 50/50 is not hurting anything really, but perhaps just some proportional interest.

Heading to the coast next weekend, although not as far north. Can’t wait! 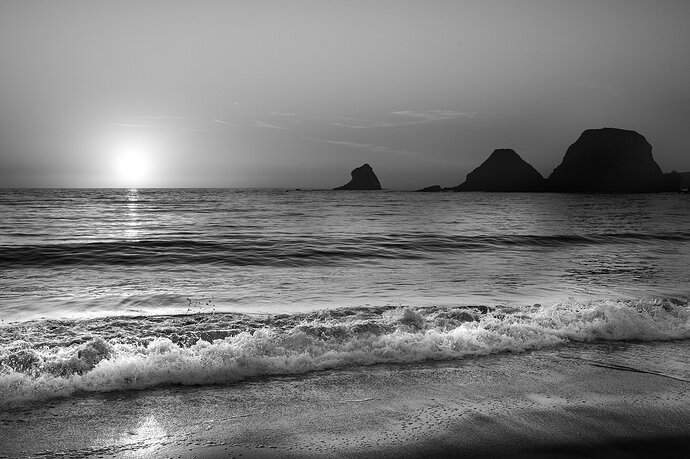