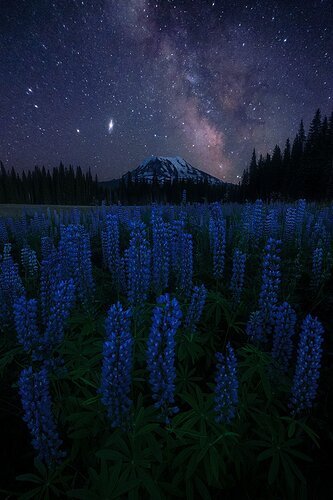 In prior posts, I noted that @Steve_Kennedy and I found the flowers to be running late with fewer options for photography than we had hoped when backpacking Goat Rocks in July. I had camped by Mt. Adams two weekends prior and knew that the lupine were on track to possibly be peaking, so for our third night we hiked back off the mountain and drove south. We spent our third night camped beside this meadow filled with lupine.

We knew we were likely to have blue skies, but playing with a planisphere decided that the Milky Way would be in play. We set our cameras up a little prior to sunset and shot foreground images while there was still a bit of light. We returned later to shoot the Milky Way.

Most of my Milky Way images didn’t turn out. I think I know what I did wrong, but I need to experiment to be sure. Fortunately, I had one image that turned out well. It is a higher than optimal ISO, so the sky is a bit noisier than I wanted, but I’ll take it.

Milky Way images always seem to be a struggle for me to nail the feeling of being there in the dark, while preserving the ability to actually see some things in the image. I’d love your feedback on how this looks, and ideas for improvement.

I think that the appearance of night light has been done successfully. The cool light comes close to how we see at night. I have little to suggest. There is that one really bright star that stands out. Generally stars look best to me when they’re dots.

Oh, and I like the mountain very much. Somehow moonlit snowy mountains have a very appealing glow to them which greatly add to an image.

Hey @John_Williams, I am SUPER new here…like less than 24 hours! But, I went pretty deep down a rabbit hole of night sky photography this summer. I never got a great overall composition because I was so focused on the sky, therefore I’m pretty envious of your foreground! One thing I learned about with night sky images is stacking. There are two programs, the one I use for Mac is called Starry Landscape Stacker. What you do in the field is take 15-20 images without making any changes or movements, then the program will align all the stars for you (without touching the foreground, or you can blend a foreground in later). Essentially what happens is that noise created by the higher ISO setting is completely random, so the program analyzes for inconsistencies (noise) and removes it from the layer leaving you with a super clean image with the stars realigned. There are ways to do this in Photoshop manually with much more effort. The other thing I found was using luminosity masks to target the noise reduction only into the darkest areas of the image, leaving your sky cleaner as well.

Excellent image, and I hope this was helpful.

The light in the night sky and on the land looks very well balance John. I think you were successful in creating the feeling of being dark. Wonderful image.

Milky Way images always seem to be a struggle for me to nail the feeling of being there in the dark, while preserving the ability to actually see some things in the image. I’d love your feedback on how this looks, and ideas for improvement.

I think this is a successful image. Id don’t find the sky too noisey and the foreground from twilight blends with the night sky. The only area I can see fo improvement is to shoot with a high focal length. At 15mm you seem to be getting a bit a lens distortion giving some of the stars a UFO appearance.

Dang, John. I think this is spot on. I really like the exposure on the foreground - it’s dark yet with plenty of tones to distinguish everything. I think you nailed the exposures for Mt. Adams and the sky, too. The focus is great. If this is the least you can do, I can’t wait to see you perfect your technique.

The only critique is that the horizon (the edge of meadow at left center) looks slightly off. What do you think?

BTW, when I lived in Portland I went to the GRW a few times but never when the flowers were this bountiful. This is just gorgeous. Hope the bugs didn’t get too much of your blood. One of the times I went there it was relatively early in the season and I hiked across several feet of dense snow. Made for some interesting and unusual images. I really loved how I could see Adams and Mount St. Helens from up high. Thanks for helping me relive those memories.

I agree about everything else that everyone has said, John. Except for the lens coma and what seems to be a decentered lens, it is a very very nice image, the blue on the lupines are other worldly.

I struggle with star shots as well, John. The Milky Way and stars aren’t my problems though; the landscape composition is the problem I have. I wish I could get even halfway what you’ve captured here! It looks much more natural to me than so many night shots (far too many are so bright it looks like a late afternoon shot with stars!) This is a delightful image. Well done!

I’ve tried taking Milky Way shots but never so successfully with the wildflowers in the foreground. This is a challenge, and you 've pulled it off beautifully. You have blended the two images very well, and it looks very natural to my eye. A gorgeous back country scene.

Welcome @David_Wallace! !, and thanks for your feedback and information. I don’t have a lot of experience with stacking, but did use my interval timer to take 3 sets of 15 images with dark shots between to give it a try. Unfortunately, I was worried the LED on the back of the camera would hurt the images, and held my finger over it. I think that actually had the opposite effect; those images are not clear. (It may also have been lens fog; @Steve_Kennedy and I had left our cameras in the meadow after shooting the foreground, and we really had a battle with it. ) I’ll do some experimenting in the future to track down why I was having issues, and try out your stacker suggestions in the future!

Thanks all! I may have to have my lens checked out. I have no idea where to do that; I’ll have to do some research.