This was shot before I started a workshop in Glencoe/Skye in february this year - bookended by two of the worst storms of 2019/20 in the UK. Another squall was on the way and just starting to snow. I’m ashamed to say it was taken from the bar in the Glencoe Hotel at breakfast … but it’s my favourite image so far this year … mainly because of the simplicity, geometry, contrasting tones, textures and simple colour palette. It prints big really well and the detail is exquisite.

Any advice on improvements ?

I’ve never posted this anywhere on social media as I suspect it will bomb as it just doesn’t conform to conventional compositional rules and subject matter. I like it … but I wonder if I just have odd tastes and am swimming against the tide … 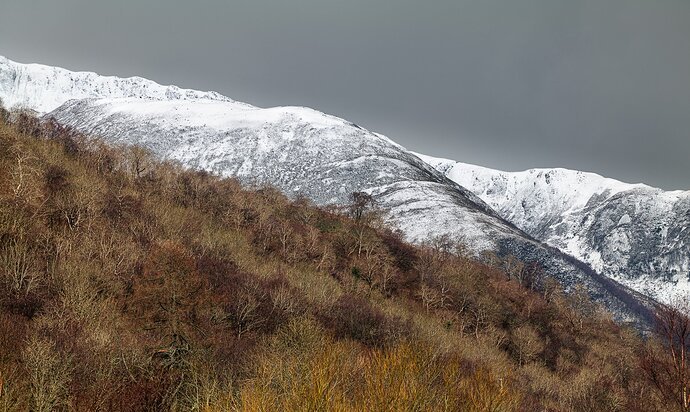 I like it! It has a simplicity in overall composition but it is unconventional and that holds my attention. The detail in the FG and BG is wonderful to explore, and the matching angles unify the two. The larger trees in the LL give the eye a good entry point from which to travel back across the hillside to the snowy hills, where there is so much interest to explore.

Think you certainly got some prime conditions in Glencoe. I was there in March and the snow had receded quite a bit.

I can see what you are going for here as I have tried this kind of shot myself but I have to be honest and say that it doesn’t really work for me. I think with these long lens shots you need to be quite abstract and also have a defined subject. Maybe a fleck of light hitting the side of the mountain to just hold the eye/interest could have worked in this instance. You then could have darkened the sky and foreground, thus providing a bit of mystery. I have a similar shot to this I took in the lakes (albeit with a light patch) and when reviewing, I decided not to move forward with it.

To improve the image you have presented, I would consider the visual weigth of the sky and the trees. Imagine them as two triangles. I would try to compose it with them being a similar size. It will give a sort of symmetry that with these sorts of geometries, I think has more visual appeal. I have cropped an example to demonstrate. You could go further by bringing the crop closer to the edge of the mountain and tree line. But then you run into danger of cutting the prominet tree central to the frame. I also cropped the birch tree on the lower right out as it pulls the eye.

In terms of processing, it seems a little flat to my eye. You could try pulling down the highlights slightly. This would add some more contrast in the snowy areas but also darken the sky slightly. Just to add a bit more punch. I would maybe up the contrast, by a few (15ish?) points too.

For what it’s worth, I think that pushing compositional boundaries is the way to go. It’s the only way that you (or whoever) will capture images they are truly proud of. Some work, some don’t. But you have to shoot what you like at the end of the day! If you like it that is all that matters

Oh, and the detail is amazing in the image. You can almost see every branch in the trees!! 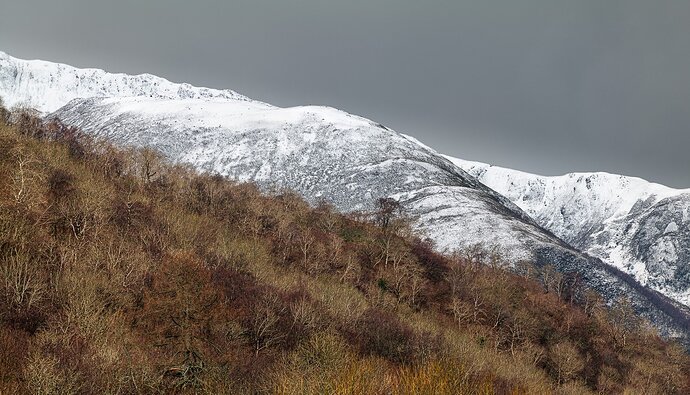 Thanks Eugene … I have several versions of this and also multiple crops … and losing the bottom and right edge to create more of a triangle is one of them … but I missed the patch of yellow trees mid bottom. The original DNG is even flatter … it was actually a sort of mixed drizzle/snow at the time which the processing has cut through. As a print it is actually more saturated and contrasty with wonderful detail … and this is why I have never posted it as it just doesn’t look the same. As I said originally … it doesn’t follow convention, but I’m increasingly convinced that social media is conditioning our expectations regarding landscape photography and I’m becoming much more drawn to the unconventional … I posted this for critique as I suspected it would divide opinion …

Oh i totally agree about social media. I detest the way it pushes a predefined model of what you should post down your throat. Post what you take and post the images that you love.

I think we all like the buzz of someone commenting/liking/sharing our images but what does it mean if we are just fuelling the machine? To a certain extent I have long given up on caring what people think about my images. It’s too stressful

Anyways back to your image. Those conditions are always hard to shoot in. Unless there is some crazy light going on it will generally give a flat scene. That’s why I love prints too. It gives so much more detail that viewing on a computer screen.

Hey Steve,
The unconventional nature of this image is actually what caught my eye. I read the reviews so far ad I agree with just about everything that @Eugene_Theron has said. I think you have to take a picture of what you like and don’t be swayed by social media input. Mostly just garbage anyway.
I see a pretty nice vertical crop with the orange bushes along the bottom creating the bottom boundary and the tree mid scene being the main focal point. The left side of the image doesn’t do much for me so that’s why I’m cropping that part out 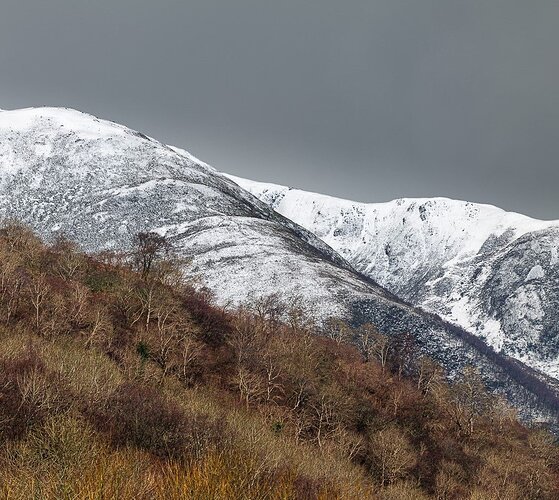 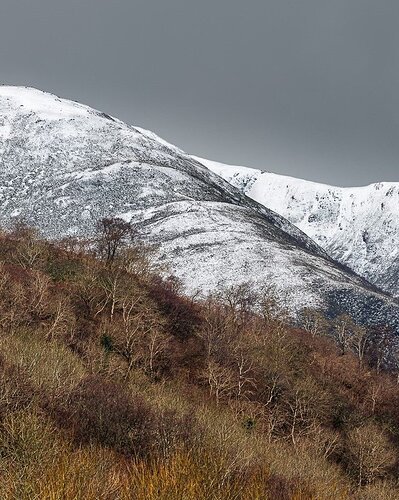 Thanks for that … it’s easy to become fixated on one vision/version of an image and losing the left certainly does create something different and appealing. The original was one of those unrepeatable 30 second windows in conditions that allowed 3 quick exposures and then it was gone, so I have always had an emotional attachment to all of the image. If this had been a static tripod shot where I could have spent 10 minutes setting it up I suspect I would have ended up with something close to your posts. I suppose it depends what you want an image to be … something that evokes memories and emotions for the photographer … or something that does it for the viewer. Not many images do both, unfortunately…