I took this shot a few weeks ago after accidentally seeing this comospition while taking a break on the walk up the mountain. Usually this scene looks quite mundane but with the light hitting the lower hill and the storm starting to break up above, it came alive.

I have processed this in a few different ways and I quite like how it looks at the moment, but I feel something is lacking in this department. I think my concerns revolve around the sky mostly; trying to get the balance of dramatic, yet not overdone. Maybe this isn’t it - I just can’t quite put my finger on it. Maybe it’s fine

Feedback/input will be appreciated.

PS: If you look quite hard you can see a rainbow

This is a four shot handheld panoramic. I had to shoot this way to get the aspect I saw. 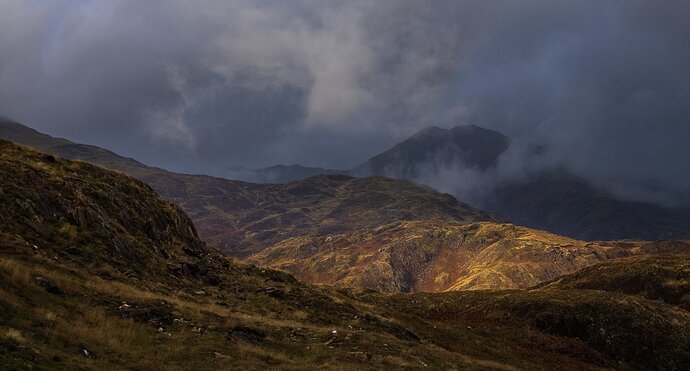 Looks quite nice, Eugene. I might experiment with punching up the whites in the top clouds and popping up the bright lit hillside. Hard to say how it would compare without trying it, though.

Quite nice. My only suggestions would echo @Harley_Goldman

@Harley_Goldman @Michael_Lowe Thanks to you both. I am going to have a play with your suggestions (and a few other things I thought of) and see how it turns out. Thanks again

Eugene, this is pretty sweet, the light is gorgeous. I also love your composition. Your arrangement of the shapes of the mountains does a wonderful job of emphasizing the spotlit area of the mountain, I’m not sure this could be composed any better.

I think some subtle dodging and burning () would take this image up even another notch. Similar to Harley’s comments I would suggest slightly dodging the highlight areas of the clouds in the sky. And I would burn down the darker gray tones in the sky on the left half of the image, this would balance the tonality with the sky in the right half of the image, and sort of create a vignetting effect in the ULC.

I love the mossy earth tones in the landscape, and think you have nailed the exposure of the spotlit area, and the surrounding dark landscape. If i was to suggest anything to the landscape, it would be a very subtle dodging of the lighter yellow “stripes” in the LLC. but thiese are nitpicks, overall this is a very gorgeous image.

@Ed_McGuirk , apologies for my tardy reply. Thanks so much for the feedback, especially your thoughts on the compsosition. I didn’t want too many of the elements to overlap (get it a bit more layered).

Those deep earthy tones you get round here in autumn are great. Especially when a bit of light hits them. I tried you idea of dodging the light stripes and I don think it adds some zapp to it. Only sublte mind you. I also did the same to the grasses on top of the first ridge.

@Michael_Lowe @Harley_Goldman and Ed - sky definately looks a lot better now. It was that upper left corner that was bugging me as it turned out. Thanks for all the feedback. 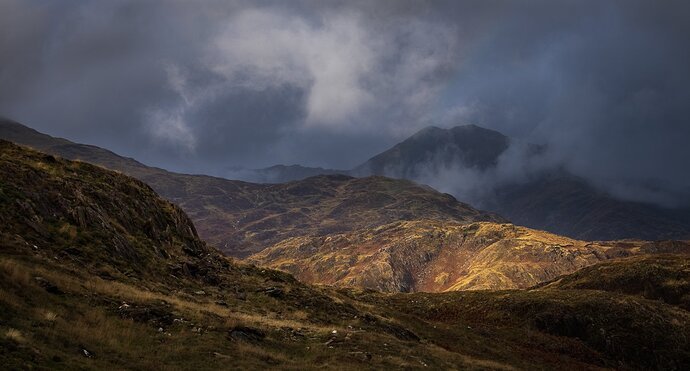 Yeah it really does!! Cheers

Cheers Eva!! The commenters did a great job of helping me find what was missing with it.