Graceful in the Light + Rework 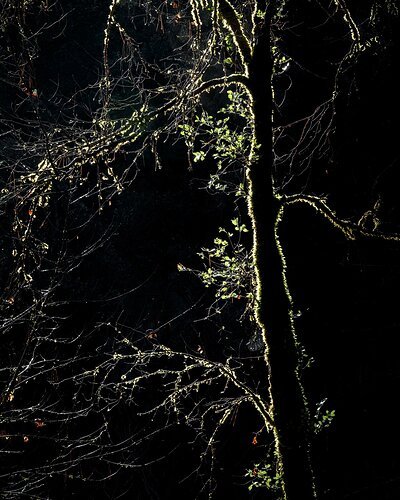 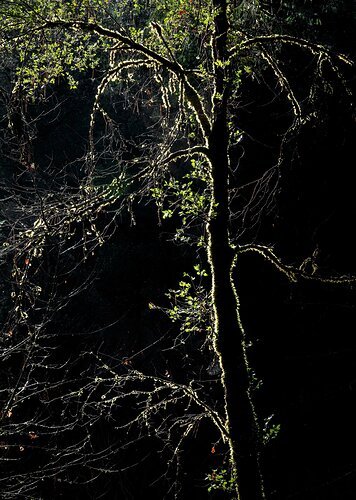 I was thinking of last week’s weekly challenge of winter flora when I made this. We were hiking up a creek in the early morning, so the light hadn’t hit the canyon walls yet, only lighting up the taller trees. I thought this tree was particularly graceful in the bright back light.

I don’t often go for the really high contrast look, but it felt appropriate for this. I wish there were more wispy branches in the right-hand side of the frame, but they just weren’t there. It also feels like there’s too much bright green in the ULC, but, again, that’s the way it was. I burned it down a bit to lessen the impact. Anyone have that feeling, too?

The upper left seems like a bigger issue than the dark right. The image is one of light on a dark background, a sort of reverse silhouette. It’s important to create a pleasing arrangement of light on this black surface and there is too large of a cluster of light in the ulc. Just my opinion. Here’s a suggestive crop. I tried to crop it further down earlier and perhaps that’s a good idea. A difficult subject but you got a striking image! The detail is wonderful, as are the subtle patches of color. @Igor_Doncov has an idea with his crop, and I also wonder about a darker vignette, especially on the left.

I don’t often go for the really high contrast look, but it felt appropriate for this.

With strong back light, and rim light on the tree trunk, this is the absolutely the way to go with this image. Just gorgeous use of these types of light here Bonnie, and beautiful processing of this light, it looks perfect.

I wish there were more wispy branches in the right-hand side of the frame, but they just weren’t there.

I actually like the large patch of dark on the right, it helps create the background for the interesting “reverse silhouette” look that @Igor_Doncov discusses.

The shape of this tree does present a composition challenge. To me there are two really strong elements here, the backlit leaves at the top, and the rim-lit moss in the bottom 2/3’s of the image. I think the image would be stronger if you simplify things by composing to emphasize just one of them. Igor’s rework does that by emphasizing the rim light over the backlit leaves.

Alternatively you could have composed this to show just the top half , which would have emphasized the backlit leaves at the top. I think either approach could work. But trying to showcase both in one image requires the viewers eye to travel a long distance, particularly in a 3:2 aspect ratio.

Oooh this is so dramatic! Love the darkness and the reverse silhouette. Igor’s crop is a step in the right direction, IMO, but I’d go even further and eliminate the top branch altogether. The shape and texture of the moss and branches is enough to keep my attention. Great work!

First of all, a terrific image; I was drawn to it immediately. I certainly don’t have the expertise of either @Igor_Doncov or @Ed_McGuirk, but I, too thought the image was a bit “busy” to process in my mind. At first, I thought about cropping the top as Igor did, but that loses all those terrific backlit leaves at the top, and the notion of how the tree has struggled to reach the sunlight. I did crop it from the bottom as Ed had suggested (just above that bottom branch), and I like that look much better - if you crop it at all. It’s certainly worth experimenting with; it’s a stunning image!

Thanks, @Igor_Doncov, @Ed_McGuirk, @Diane_Miller, @terryb, and @Kris_Smith for your thoughts. They jury appears to be in on the ULC leaves being a distraction and/or unbalancing the frame. So, I cropped it to 4x5, per Igor’s suggestion. I tried a crop of just the top, but it was those lower three branches that I thought most graceful, so I won’t post that version. Thanks, all.