Looking Down on Creation

Looking for creative feedback. I took this photo yesterday in the rain. I was on a small bridge over a creek. I shot straight down. I can return to re-shoot this if need be as it’s near my home.

One thing that I did do in processing this that should be noted is that I extended my shutter speed to 1 second for the water. The leaves were bouncing around during the exposure. I took one shot for the water and another with a quicker shutter for the leaves and blended them in post.

What could have been done to make this a more visually powerful image. 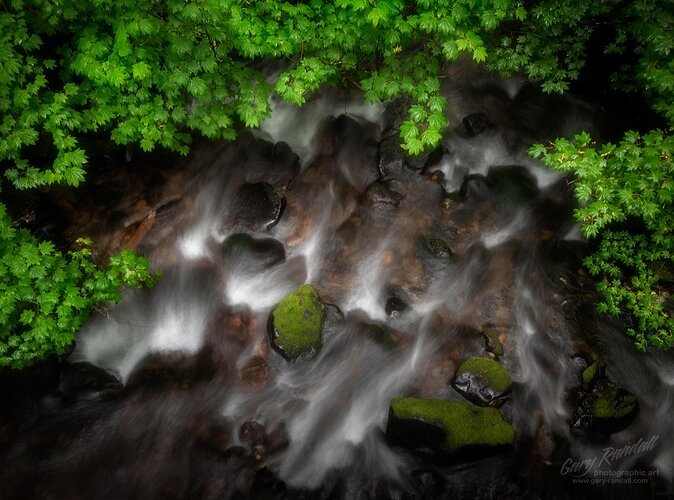 This is a very interesting perspective Gary. It’s great how the branches all encircle the mossy rock in the middle, as though the rock is a conductor of an orchestra. It looks as though there is an Orton effect based on the appearance of the leaves. If that was something added in post, I don’t really think it’s needed here. There is plenty of great color and texture to work with, and I think it only distracts a bit.

I would also consider lightening the lower corners just a tad. It looks like they were burned in post to direct attention toward the middle, but it looks like the water is composed in a way that it will naturally do that on its own. Perhaps reducing the effect of the vignette would make that part of the photo a bit stronger. When it comes to the composition as a whole, it works quite well for me, and I really like the simplicity, combined with the very interesting angle.

In other words, forget the processing and go with the original file.

Thank you Ben. This is the feedback that I was hoping for. 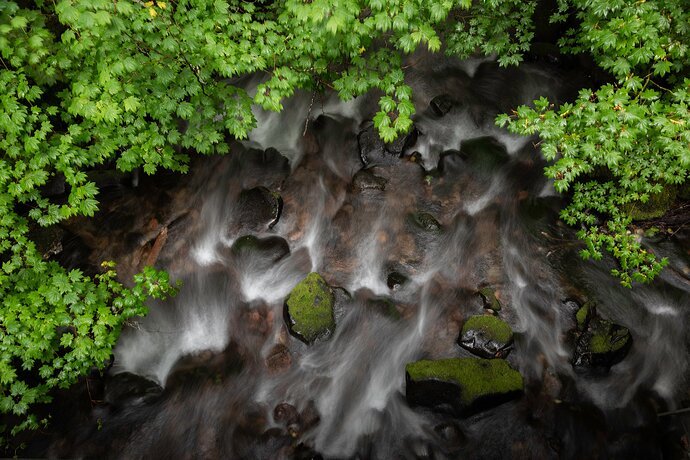 The issue I have with this image is that the frame is more interesting than the center. I am personally more drawn to the leaves while the water less so. Part of it is due to the fact that all the color is around the edge of the image. I could see it from a different point of view but that’s my first impression.

So. Your issue is the point of view? I have many from a more conventional point of view, as do a lot of people. I was trying to give a unique point of view. I’m assuming that you recommend deleting this one and going on the the next Igor?

Thank you for your feedback.

No, my issue is not point of view. The point of view is interesting. My issue is that we are looking through foliage at something but the foliage is more of an attention getter than the subject. The leaves are bright and colorful and the stream is darker and the light is flatter. I feel the center doesn’t hold enough interest for it to be the main focus, or to even compete with the leaves. You’re providing a window to something. We’re expecting some ‘treasure’ being revealed by an opening of a curtain of green. And for me it’s not there. I like the idea and I like the point of view but it’s not being conveyed in the best manner possible.

Gary, it’s not a question of deleting or saying ‘it’s no good’ and that’s the end of it. I really don’t enjoy very much giving technical processing feedback. I look for and seek from others feedback of what the image is about and whether I’m getting my point across. To me that’s more valuable. If you are after processing recommendations on how to improve your image then state so and I’m fine with that. But for me, at least, a critique is more than manipulating a raw file.

No sir that’s not my point at all. My point was simple. That was the only choice of background that I had from this point of view.

Perhaps constructive criticism could be how I could minimize the characteristic of that element that distracts you, perhaps an example would be to suggest trying to shorten my DOF to differentiate the leaves from it by creating more of a bokeh background, which is certainly not a postprocessing suggestion. Heck if I know. That’s why I put this up to this group. Not to understand what you don’t care for in the photo but how I can improve it. That’s the constructive part of the criticism. This is why I asked about the POV. I was asking what you would suggest that I do. I was asking for suggestions.

That being said, I agree with you. The water wasn’t my first reason nor meant to be the first thing that the viewer noticed. That’s not the point of interest in this image in my opinion but the background. In my processing approach I attempted to minimize the background effect on the leaves by darkening the water in a vignette that did not include the leaves. Making them stand out from the background. This is evident by the second unprocessed photo that I posted in a subsequent comment.

I mean absolutely no offense but I hope to make myself understood using this printed medium, which I acknowledge is easily misunderstood.

Thank you Igor. And I am still very receptive to constructive criticism and a friendly discourse from you or any at all concerning my photos be it infield advice or post processing advice.

In terms of constructive criticism - on how to deal with what I find an issue. Here is a suggested rework. Even though the foliage is beautiful I diminished it to have the river ‘have it’s say’. And I tried to bring the brightness of the moss to the level of the leaves and separate themselves from the river. The two rocks on the right could have even more brightness. 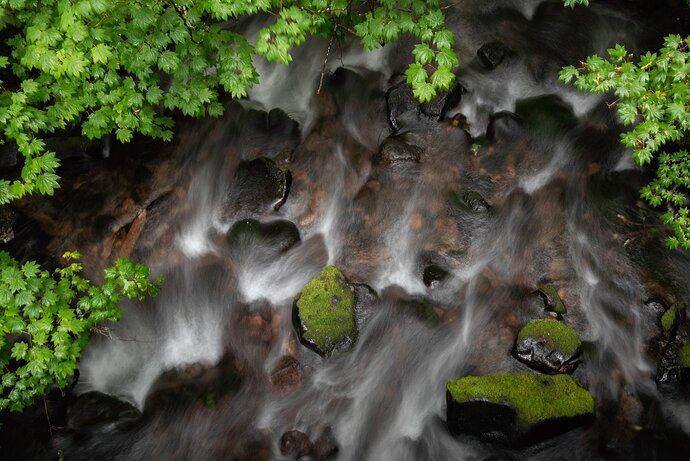 You could just raise some of the darkness of the bottom of the river to bring out more texture in the water and brighten up the moss on the rock and that may be sufficient to raise awareness of the river. Because it really is an extraordinarily beautiful scene. I really like it very much.

@Igor_Doncov Fantastic. I appreciate your input a lot. I Iike this comp and will go back and rework it using both yours and @Ben_Horne 's advice.

Thank you for your time Igor.

I really like the use of the Orton effect; for my taste, this focuses my attention more on the water. However I can also see Igor’s point of view and appreciate his slightly different compositional take on the subject. Perhaps a combination of both would be interesting to view.