Looking for suggestions on Insect Photography

I had a lot of time with this one. I used a tripod with a strong head on it. This was with my 90D and the 180 macro. This is very close to 1:1 so let me tell you what I run into with insects. You can see it here.

Sunlight causes reflections, near his month, DOF is hard so I never know if higher F-stop is better but I worry about diffraction. I have of this subject. I do find using a flash helps increase the shutter speed, this guy was moving well eating. I am really interested in composition with insects. I also have a 100-400 ii which is really sharp and I can focus at 400mm about 3 feet from the subject. 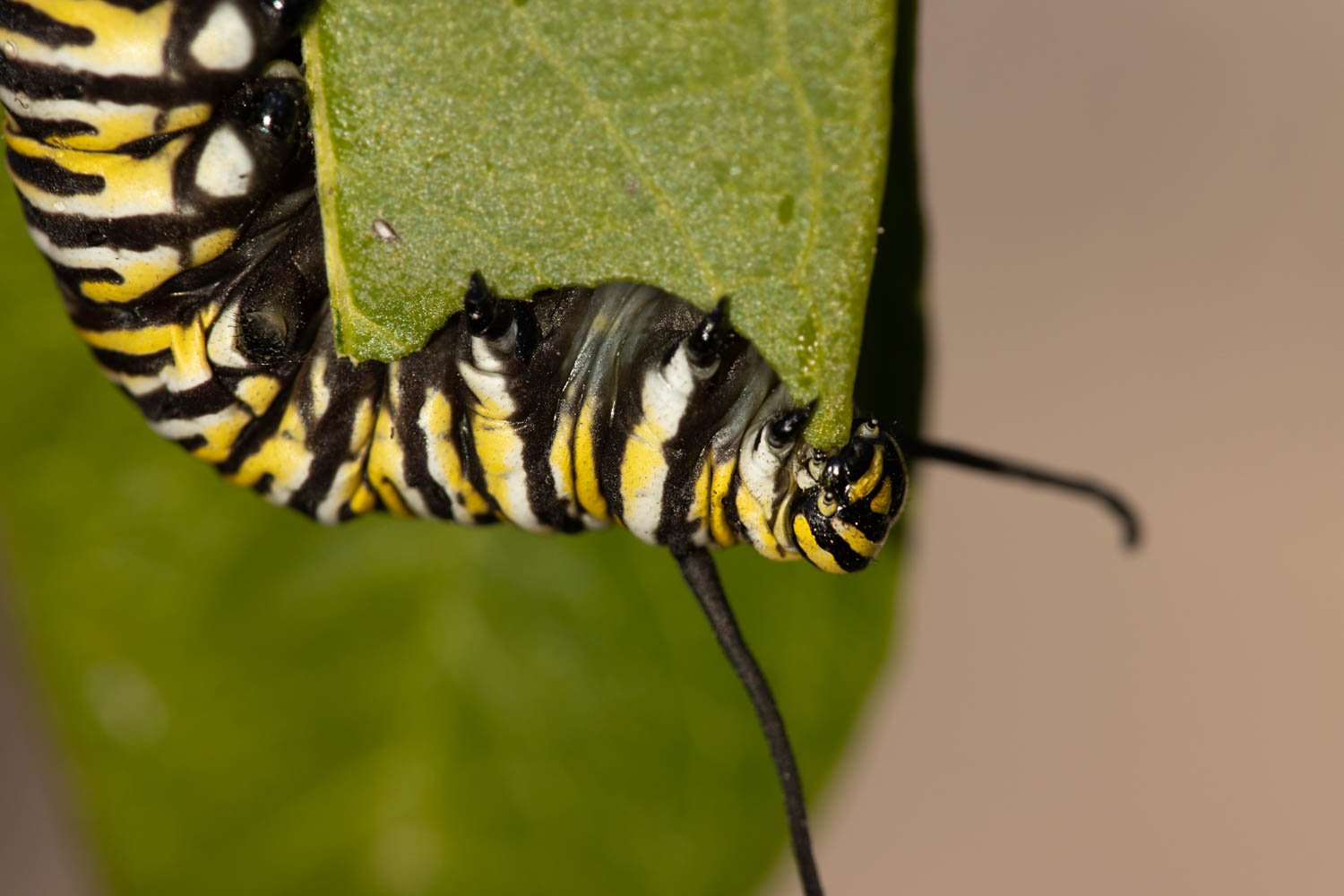 Dean, you have pretty nice look at this guy. The DOF is shallow when working up close in macro, but I think it looks fine in this shot (you didn’t include your settings, so unable to offer any suggestions there. The sharp focus is on his face, and that is the main thing. As for the composition, it feels a bit centered. I am wondering if cropping it something like what I did below (I took the liberty to download and crop) improves the image. It helps remove some of the unnecessary out of focus area in the image and off centers the face a bit. What do you think? I like the bright colors of this guy. I use a flash quite often in macro, but with a diffuser. Did you wind up using flash in this shot, or was that open sun? Also, I do find a diffuser held over the subject when using harsh sunlight works well too on these tiny guys. It allows us to shoot all day long when shooting macro, which is pretty nice. 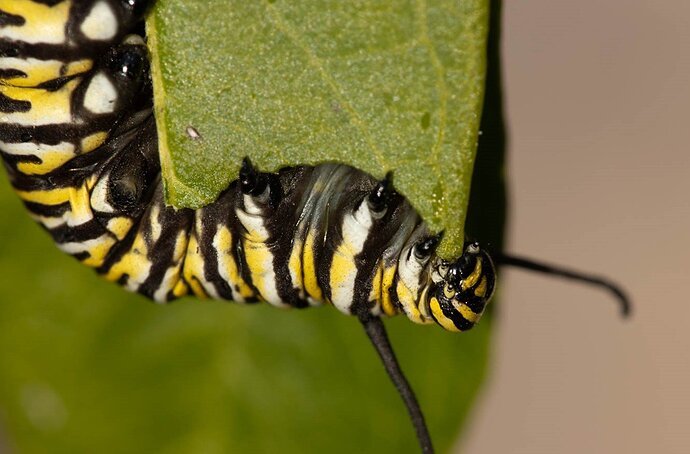 Dean: Getting into bug photography can be fun. As you’re discovering DOF choices are a big challenge. Do not be wary of diffraction. I often shoot at f32 with my 200mm macro and can detect no issues. I think the effects of diffraction are more theoretical than actual and those who beware of it are being overly cautious. With good quality lenses it should be a non-issue.
With that said, small apertures do require longer shutter speeds and/or higher ISO which create their own issues. Bugs are often moving so they don’t lend themselves to stacking. Point of focus becomes more important if you won’t be able to get the entire critter sharp. As a general rule get the eye sharp and the other stuff usually falls into place. Plane of focus is important also. Try to get parallel to the subject as much as possible. If possible I’ll engage my DOF preview but find that to be tougher with moving subjects.
When shooting fast moving subjects like butterflys I usually put the tripod away and shoot hand held at a higher ISO. I also use short bursts of shutter releases and don’t try to time the wings opening or getting a specific position in the frame. You might also compose a bit looser than you would for a stationary subject to give yourself some room for cropping and a little more working distance. Remember, pixels are free and the delete button is your friend. I’ve done butterfly shoots where my trash to keeper ratio approaches 50:1 but that one may be terrific.
In general I don’t use much flash on bugs unless it’s a little fill. The shadows can be pretty harsh unless you have some kind of diffuser system and at close ranges the flash can be overpowering.
As for this image a bit more DOF would have been better but you didn’t specify your aperture settings. I generally try not to cut off the antennae unless I cut off a lot so that it looks intentional and not accidental. Hope some of this helps and if you have specific questions don’t be bashful. >=))>

Thanks Biil and Shirley. The photo was not cropped at all but I like what Shirley did. I forgot the specs so here they are. 1/60 F/8 iso 200 no flash, sunlight. The lens is a Canon 180 F/3.5 macro. I got it to not scare away the subject. I actually tested the newer 135 ST-E but found out it is a 1:2 but it was very sharp. So breaking off this one I uploaded another with a flash.

I have the Magmod which works well, but I used another Magmod which is a range for close up and telephoto, I should have used the other one that looks like a small dome, I use this for flowers.
In this photo it is not post process so is as shot. This one 1/250 F/13 iso 200. You can see the effect of the flash on him so I am not sure if that can be post process out of not. This is what I do have problems with a flash. I do also have off camera and reflectors. I have a wireless control so maybe a reflector would have been better. What I like about this photo is the worm is resting on what he has eaten, so if you have a good way for me to go on post process that would be awesome 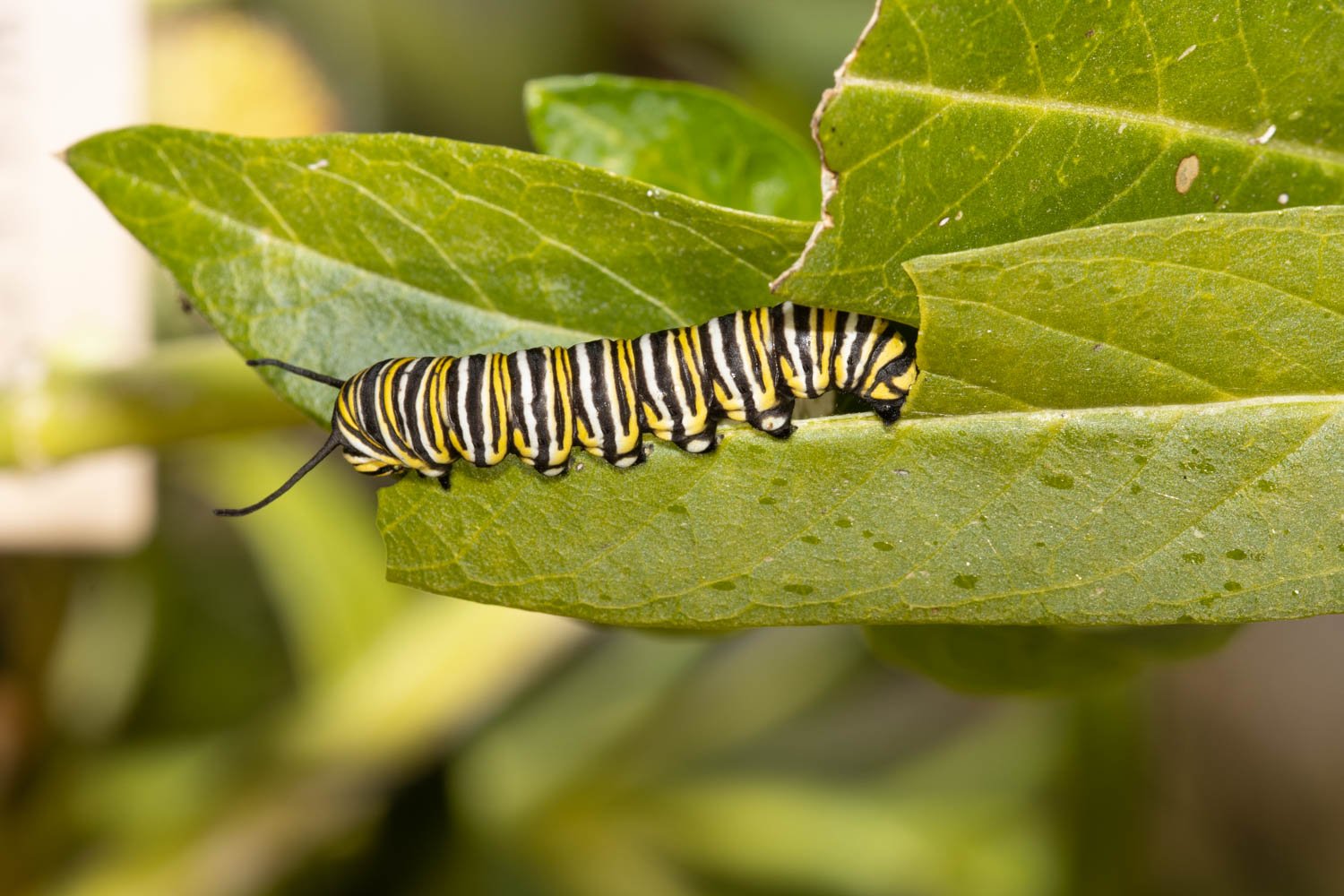 Yes, I can see a flash was used in this shot, Dean. You might can lower the highlights and lose some of the appearance of the flash. It really isn’t bad, in my opinion, and your Magmod calmed the shadows quite a bit. F13 over the f8 you had to use without the flash certainly gave you more DOF. I think on shots like this one, I actually shoot at least f16, f19, when using the flash. I am bothered with the left side of this image, whatever that white square is, it draws the eye. I know you would probably want to crop this down some to lose the area that isn’t enhancing the image, but I think trying to crop off the left is going to crowd his antennae too close to the edge. I find it so hard to keep a close eye on the background when shooting these little subjects. I’m hoping I can get better at that. It is after the shoot, and I am looking at them on the monitor that I discover that I should have moved slightly to the right or left maybe to eliminate a distraction. I think Bill gave some very good advice in his comments above on your original post.

Thanks Shirley, This was a uncropped so that is why you seen the sign in the background. One reason I like the flash is because I can shoot lower ISO and faster shutter. Bill’s comments were good. I will make some changes with this one using the comments I have seen here. I would preferred the worm starting eating more to the right for a better fit on the leaf but I do not speak worm yet.

Dean, I use the Canon 180 macro all the time. I’ve tested it for diffraction by shooting a flat subject with lots of small details at all apertures from f/16 to f/32 using a tripod, cable release and mirror lock-up. Looking at 1:1 on a 27" monitor the first I could see even a slight loss of detail was at f/22. That difference is easy to make up for in a large print with a bit of extra “clarity” or micro contrast in processing. It will not be seen unless your printing very large (say 20" x 30"). At f/25 there’s a bit more and it’s clear at f/32, but still not going to be noticeable at “standard” sized viewing. Although I’ve never printed a macro shot at 20" x 30" or larger, I expect that the very modest reduction in sharpness can be overcome in post processing.

Thanks Mark, I have never tried that test so good to know. I understand diffraction pretty clear but since I am not printing large prints maybe I will try higher f-stops. I have been using the DOF button more because sometimes I think I need F/22 but F/11 actually works for the composition I have. I do wish that DOF button was not tucked in the corner under the lens.

A large diffuser will soften the highlights produced by your flash. One issue with longer focal length macro lenses is that the flash is often too far away from the subject. Mounting the flash off camera and position it to be as close as possible to your subject are also essential for soft highlights. I would have used a vertical comp for your caterpillar and position the camera further back which will get all of the larva in the frame and give you a little extra DOF too. A head on shot taken at f22 would also be an awesome comp. Experimentation is the key for getting ideal macro shots. Shirley’s crop strengthens your submitted comp. Looks like you have a good start and keep shooting…Jim

Thanks Jim for the advice. I have different options for flash, one is a like a extender which works well for a bird in the tree about 50 feet. People have asked me why I don’t use a ring flash, maybe I should think about that. I love the idea of using a off camera flash and I am setup that way, so when a subject like this comes and barely moves I will try that. I have done head shots but not F/22 I will have to try that. With that said here is one at 1/250 F/14 400 so I welcome any comments next time I come across another subject like this. (no flash, just sunlight) 180 macro 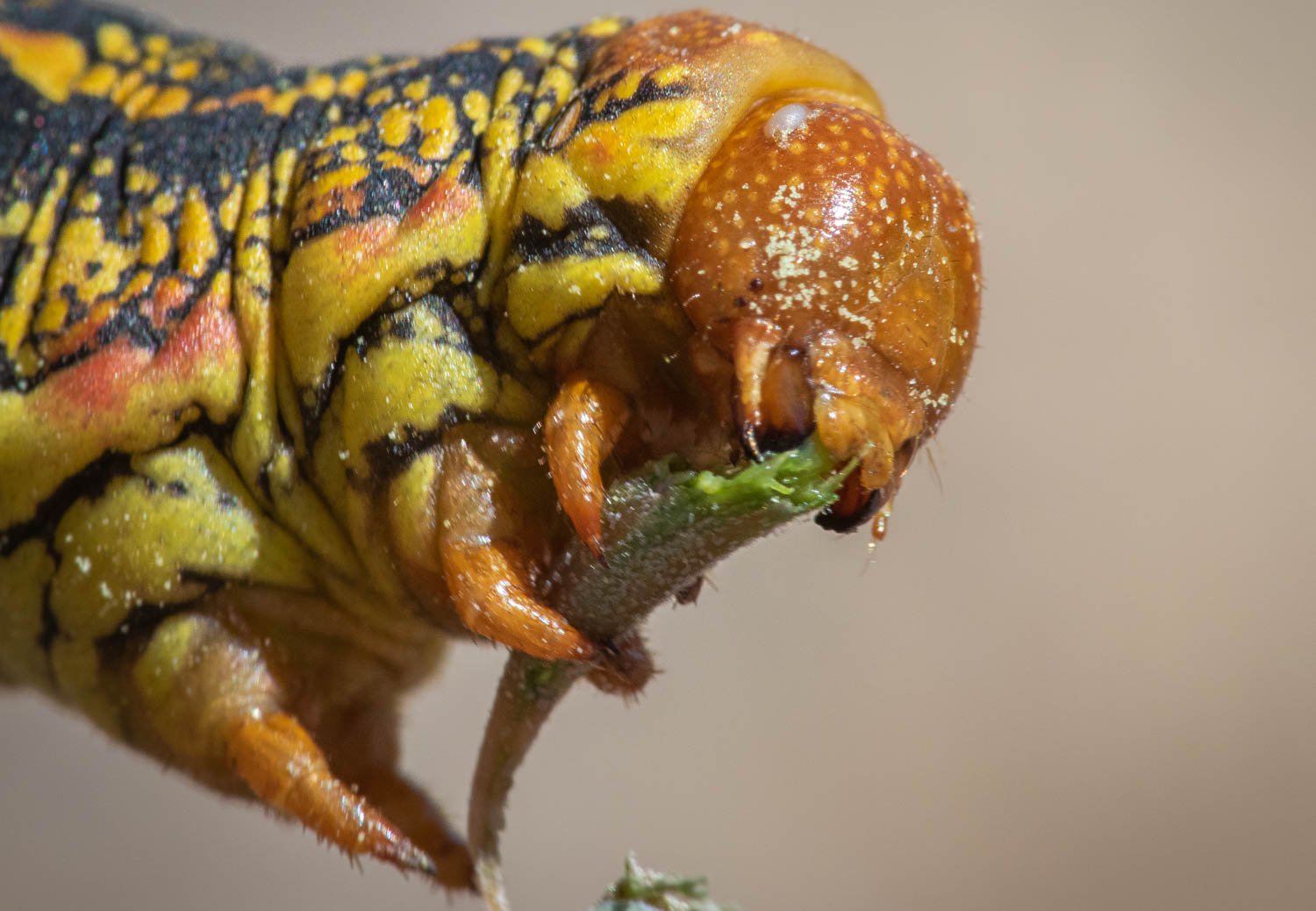 Dean, it looks like you are really getting some opportunities to shoot these beautiful caterpillars. I would recommend that you post any others that you have to a new post, because folks may not realize there are other images besides the one that shows up on the front page (your original post), and so they are missing your images. I think you would get more views and critiques that way. You really got in close on this last one. Did you crop it quite a bit? It isn’t quite as sharp looking in places on him, so it could be just that you cropped in a lot.