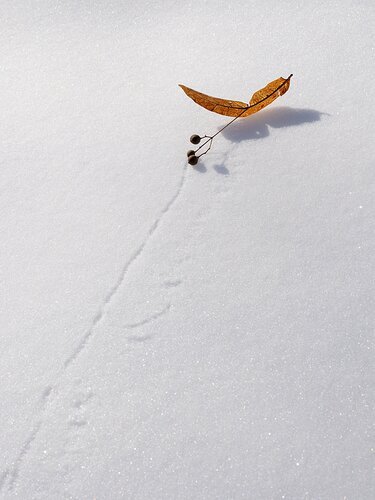 This is the basswood bract that caught my attention the other morning while looking down out my dining room window with some coffee. The tracks it left on the snow as it skittered and slid in the wind. Wonderful, but darn it was hard to capture.

A re-edited image with a slight crop and some of the track in the LLC cloned out. Better? 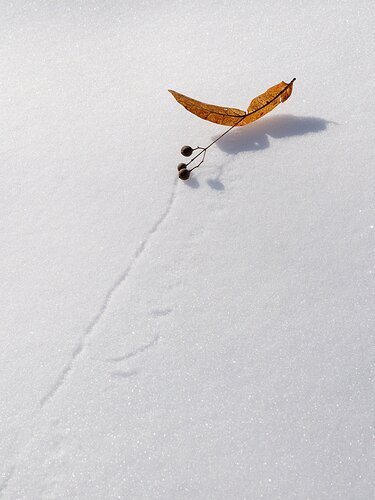 One more for consideration. A different shot with similar processing, but a different aspect ratio. 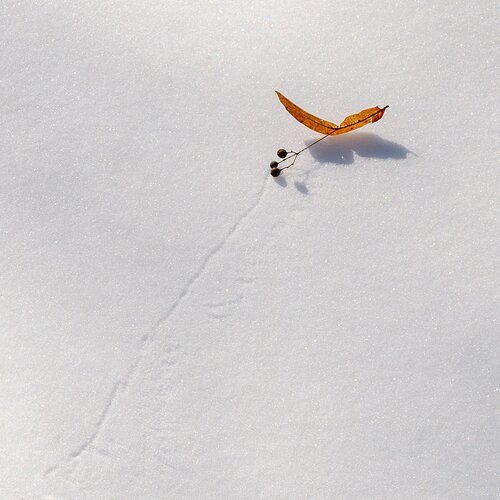 Does it look forced? Should I try a wider image? (I have some). Does it translate? Sometimes 3D doesn’t work in 2D.

Processed for clarity and sharpness. Did some brush work in the tracks to make them stand out better (lowered shadows and exposure). Cropped for emphasis, but not a lot.

Well, now you’ve upped it a notch! There’s an ongoing narrative here. A story. A tale.

Kristen, another great shot in a nice series. I love how the tracks lead the eye to the leaf and berries. Again, the back lighting on the leaf allows the viewer to enjoy the texture in the leaf. A good cup of coffee brings out your best shooting, it would seem!

Thanks Ronald & Shirley - The tracks gave me the most headaches so I’m glad this image seems to work. I played with a couple others with tracks, but none worked as well.

Coffee works wonders for anything, doesn’t it??

I like this even more than the first one you posted the other day. The leaf seems to be floating just above the snow and the track is a fascinating element. The texture on the snow is lovely and the track looks perfect.

I’ve often heard people make negative comments about an element exiting the frame right at a corner, and I never quite agreed with them, but in this case, that does draw my eye into the corner, away from the gorgeous subject, and sort of leaves it parked there. A slight crop from the bottom would sole that issue, for me, and leave plenty of the track. Or it you waned to keep the frame, the last part of the track could be cloned out. That might work best for me.

Kristen: This tells a different story than the first image. The light on both is compelling. I agree with Diane’s comment about the track exiting the corner but that’s a pretty trivial thing. Wonderful subject superbly rendered. >=))>

Thanks everyone - I’ve added another shot with Diane’s suggestion. I’m not sure it isn’t too abrupt of an end to the tracks. I left some at the extreme edge, but maybe I’ll give it another go. It feels off balance to me.

I think I like the square one the best, Kristen. It just seems to fit well to me.

For me the square crop works best.

Kris, I like the original post the best, because of the long track leading in to the bract. The multiple spots where the leaf flopped against the snow speak to the wind blowing this along and it tumbling or bouncing.

Thanks everyone…these kinds of images can be so subjective and that’s the fun of them. Hopefully I’ll get out into the woods to play in the snow later this week.