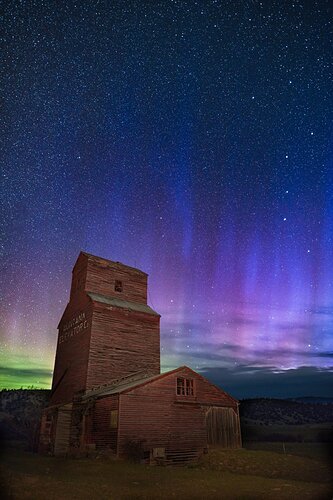 Lady Aurora dances with Father Time in this scene from Dry Creek Road north of Belgrade, Montana. It’s almost as if the Northern Lights are being poured out of the Big Dipper. To stand in the shadow of a building like this with it’s rich history while watching the Northern Lights dance across the sky was an incredible way to spend an early morning la few weeks ago. I’m not sure if it was pigeons or an owl in the rafters, or the distant sounds of cows, but there were some strange noises coming from the general direction of that old elevator. The bears are still out wandering around the creeks looking for any berries that may be left, so I’m always on high alert when out in the dark. Just like eyes adjusting to the dark, your ears really begin to tune in to the tiniest sounds. What is very likely a tiny rodent near your feet, becomes a fearsome Grizzly Bear hiding behind the building! Other than the sky itself, nothing dramatic occurred and I drove off with a content heart and a camera full of images!

I’d like to hear folks opinions of low level foreground lighting. Being a night sky image, it was obviously not this bright in the foreground. Also, what do you think of the Big Dipper brightness being enhanced?

This is a noise reduction stack of 4 light and 10 dark images stacked in Starry Landscape Stacker. I used Topaz Denoise to reduce noise in the foreground. I used the MiniStars action in Photoshop to reduce the appearance of stars in the sky. I used Lightroom for the rest of the processing, including the brush tool to selectively brighten the stars of the Big Dipper. I masked the sky and added some contrast and clarity. I lighten shadows and reduce noise in the foreground. I played around with hues, saturation, and luminance. I actually reduced the saturation on the building. On the Tone Curve, I lightened the shadows a bit and brought out more details in the sky.

This is a really beautiful image (and a very relatable story, though grizzlies are a step up in the scary things going bump in the night continuum). To answer your specific question, I don’ think you need to enhance the Dipper. It’s pretty, of course, but number three (at least) in the image for me after the aurora and the building itself. I do find the grass foreground to be a little discordant, and I would tend to pull the brightness back on that (though I’m not sure that doing so actually is an improvement). In any case, thanks for sharing this beautiful scene.

This is an incredible image. I don’t think I’ve ever seen the Auroras like this. Awesome.

I really like the work on the sky and Aurora. The small version seems to look noisy, but the larger version shows none of that…only glorious stars. Well done.

This is a wonderful image. Getting the Aurora is great, your foreground subject is nice as well. I’m ambivalent about the Big Dipper.

The thing that bothered me the most was the key-stoning of the building. I did a couple of perspective corrections in Photoshop to resolve most of it. I also made a couple of tonal adjustments that for me make the image stronger. Here’s the result. 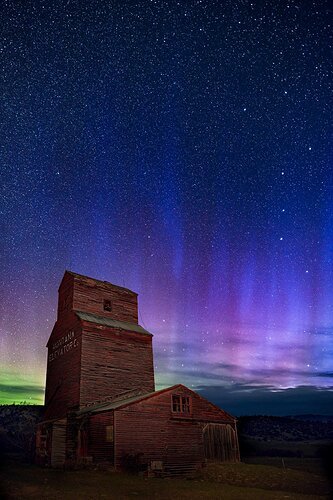 I’d like to hear folks opinions of low level foreground lighting. Being a night sky image, it was obviously not this bright in the foreground. Also, what do you think of the Big Dipper brightness being enhanced?

The Big Dipper enhancement looks a bit obvious to me, and being near the edge of the frame, it risks pulling the viewers eye away from the center of the image. I’m not sure that enhancing the Big Dipper helps here, and at worst, it may be slightly distracting.

The issue of foreground brightness is a matter of personal taste. Some viewers will think it is tastefully done and helps the image, and other viewers will not like it “because it doesn’t look like a night image” . There is rarely a night image that pleases both of those camps. Personally I don’t mind seeing a foreground this bright, because the barn adds something to the image for me. But with that said, I find the edge darkening in both of the lower corners to be somewhat distracting, and would want to eliminate that.

Good input, thanks all. I think the lighting issue at the foreground was due to the limited reach of my light. I did not move it around so the corners didn’t get illuminated. I fixed it with a brush to increase shadows, contrast and decrease exposure a bit. That seemed to help. I darkened the stars a bit but since I edited that in a version prior to star reduction, I can’t use the same brush. I’m not real proficient in Photoshop so I’ll have to play with getting the building to be more straight. I used the transform tool in Lightroom to fix it a litte, but thats what put the Big Dipper so close to the edge. 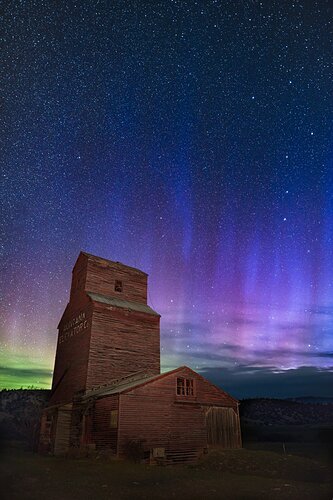 The foreground looks sort of blotchy in this thumbnail, but its better in the full res image.

I’ve never seen the Northern Lights. I’d love to see them and try photographing them some day; your image is inspirational.

I completely agree with @Ed_McGuirk that luminosity balance in these night time images is personal choice. (I don’t have the best night vision, so if I can seem much of anything besides shadows the foreground always looks too bright vs. reality to me.)

With that said I really enjoy your version, and love that you caught the Big Dipper and the North Star. I agree that they don’t need to be brought out (at least that much). To my eye, again personal choice is all over these night images, I’d drop the blue saturation a tad.