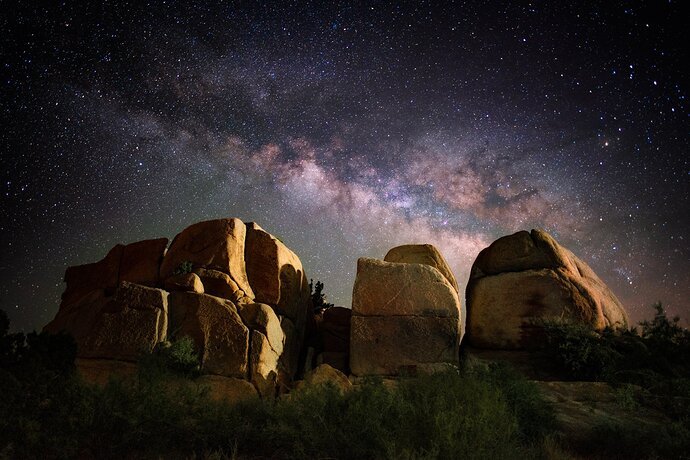 I don’t do a lot of Milky Way images, but they are so fun especially when the sky is fairly dark, as in this case a week ago in Joshua Tree NP. I love how the light (from an accidental passerby!) illuminated the sides of the huge boulders, creating some stark lines and shadows.

How many Milky Ways have those boulders seen?

I have a few questions about composition below! Thanks.

Lovely picture with great colour. And boy, talk about how it’s better to be lucky than good - I mean, to get that lighting to play for you so perfectly. I actually like the position of the galactic core and how it seems to be pouring in between the boulders. When I look this image large, though, it looks like the sky isn’t quite in focus. I say that because of the stars, particularly on the upper right and how they appear as ellipses rather than dots. I always found that really hard to get right. Anyway, how lucky are you to have witnessed a sky like this!

This is very nice

I like the boulders on the composition.
Nice colors.

I do see quite a few hot pixels in the FG.

Thanks Michael. I didn’t notice those hotspots until I zoomed in, and there they are! I’ll remove them in Photoshop.

… like the position of the galactic core and how it seems to be pouring in between the boulders. When I look this image large, though, it looks like the sky isn’t quite in focus. I say that because of the stars, particularly on the upper right and how they appear as ellipses rather than dots. I always found that really hard to get right. Anyway, how lucky are you to have witnessed a sky like this!

Yup, those corner stars are more ellipses than pinpoints. I shot this from a stationary tripod, not a nice tracking device, and I think the corner stars are the first to start to blur when shooting from a stationary position. I tried my best to refine my focus on a single star before shooting. Next time I think I’ll try a shorter exposure, maybe 15 seconds (this was 20 seconds)…that might help some.

Thanks for taking a look and adding your thoughts!

20 seconds shouldn’t be a problem. I don’t think it is because of movement but rather focus.

I think your focus is fine, but clearly on the edges you have stars that are not pin points. It isn’t from too long an exposure with a 20mm lens. I think it is lens coma. I don’t know which 20mm lens you used, but if you’re not familiar with coma, take a quick look via google and you’ll see the issue.

Thanks again @Kerry_Gordon. I’ll have a chance to work on my technique as I’m going out there again soon. I focused on the stars in the center of the frame, and they appear fairly sharp to my eye in the final image, but I’m sure I can do better. I tape down my focus ring after focusing, but I could have easily jiggled it and changed my focus!
@Keith_Bauer, I used the Nikkor 20mm f/1.8 lens on my D750. I was wondering about lens coma with those oblong stars in the corners. I’ll read up on it. Uh oh, am I going to have to save for new astro lens?

I agree with many of the above comments; I like the boulders, but feel that the milky way core is a bit too low and close to the rocks (this was my first impression when I saw the image before I even read your questions).
One idea to mitigate the positioning of the milky way might be to create a 2:1 pano crop of the image as illustrated below. this has the following benefit to me:
a) The core is cut off on the top and bottom, which makes it less objectionable to my eyes
b) This has the effect of making the boulders more central and prominent which makes them the main subject of the image rather than the sky. The boulders and the lighting on them is more unique and personal than the milky way.
c) This removes some of the more smeary stars, as coma is worse towards the corners of the image.
Cheers,
Mike
. 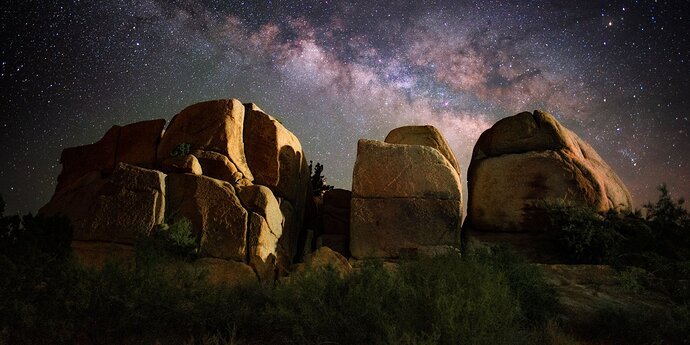 @Michael_Schertzberg - that’s a really creative way to deal with this composition, and reap those benefits you describe! I especially appreciate you noting that boulders are really the main subject, more unique and personal than the MW. I tend to forget this and think of the MW as the main show. Thanks very much.

@Keith_Bauer - I found a very interesting article on Ian Norman’s website (LonelySpeck.com). It is “A Practical Guide to Lens Aberrations” (https://www.lonelyspeck.com/a-practical-guide-to-lens-aberrations-and-the-lonely-speck-aberration-test/) and it goes into great detail all kinds of lens aberrations. There is also a self-test one can run to check your lens’s aberration.
I followed a link in the article to a Photography Life review of my particular 20mm lens. The reviewer noted a lot of coma at f/1.8 in the corner of the frame, but when reducing to f/2.8 the coma was nearly all taken away. So I’ll try f/2.8 next time. 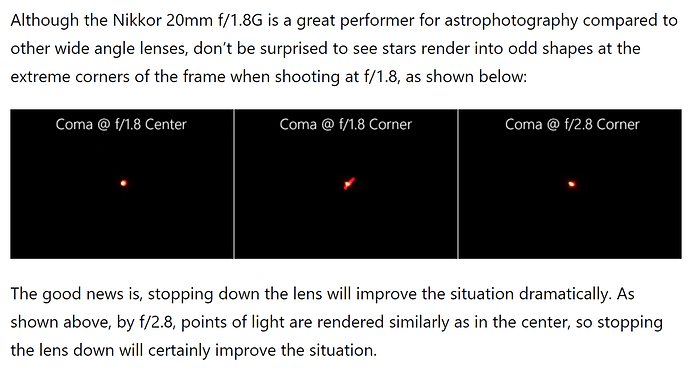 Mark, I like this image a lot. I actually prefer the composition as you originally presented it. I think showing the more expansive view of the sky is worth more than worrying about coma. The tighter crop in the rework feels a bit cramped to me. While the “lightpainting” from the passerby adds a nice touch to this scene, I would slightly reduce the luminosity of the brightest highlights on the rocks. you may want to research lenses from Rokinnon, they are known for having less coma than Nikon or Canon for that matter.

Thanks, @Ed_McGuirk, for both your feedback, and also for your tip about the Rokinon lenses. I’ll look into them.