More or Less Than a Rock

This was shot not too far from the image Yubay (I sell). There was a group of giant boulders reclining on one another that were likely used by ancient people for habitation. There massive size was so imposing that I was overwhelmed by their presence. Initially I shot this with more sky but I cropped it down to show how I felt about the rock. 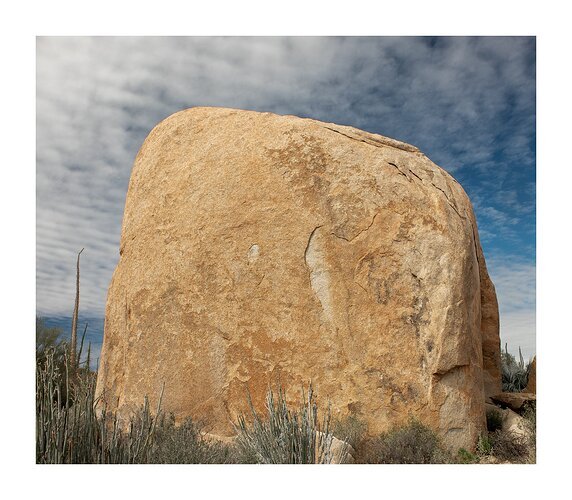 Yup, it’s a big rock. Your choice in composing by not including more sky, and for that matter more foreground, really tells the viewer what you’re trying to say and represent. Very little for scale reference, although judging from the plants in the foreground, I’d guess the rock is at least 12ft high? probably higher given the somewhat wide angle at 24mm.

I think your bold and purposeful comp more than makes up for any special light or drama. (which frankly aren’t required for all photographs!)

I’d guess the rock is at least 12ft high?

Yes, this is a big rock. Artistically and emotionally, this is not doing much for me.

Artistically and emotionally, this is not doing much for me.

It would help if you provided a bit more specific information than this. This kind of critique isn’t really helpful, Harley.

I really don’t know what else to expand on. To my eye, it is more a documentary image of a large rock in reasonably good light. The image is not grabbing me in any way to further explore nor is it making an emotional impact. I can’t see any crop or any other modification to change its impact on me. It is just not doing anything for me. I am not sure how to further expand on that to be helpful to you. I would be happy to do so if there is some way I can help.

Big rock indeed. The way you have it cropped does the trick showing that for me. Realistic (and nice) colors in this and the textures in the rock are excellent. Reminds me of the upper part of a stetson hat so a good western feel. Yup!

Hey Igor, I agree with Harley on this one and I’ll try to articulate why. I believe a good photo should tell a story or create interest on its own. Your write up creates interest but this makes it a more documentary style photo IMHO. It seems the story you want to tell is that this rock is huge and imposing. I think including something for scale would help tell that story like a cactus, bird, person ect. Also waiting until the sun is closer to the horizon isolating the rock would help.

I love this type of boulder. Very similar in look to those at Joshua Tree. Framing up top for the sky looks good but I think this image would be much stronger if you included some foreground. The bottom just feels cutoff to me.

The bottom just feels cutoff to me.

Igor, I agree with Dave’s comment about the bottom feeling cutoff. The foreground vegetation was the best vehicle to provide a sense of scale, and emphasize the size of the rock. With that said, I think this image might be interesting to also see in B&W. The shapes, textures, and clouds might come across more forcefully in B&W.

Wow, that is huge. Very cool rock Igor. I do agree that a bit more foreground would have helped with perspective.