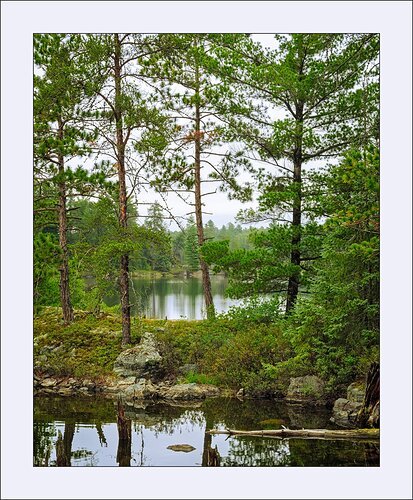 I remember sitting down on the damp bank across from this scene and trying to figure out what needed to be included in the frame and what didn’t. It was a pretty chaotic scene, especially the foreground water. Lots of interesting remnants of long-ago trees downed with many more still rooted and sticking up from below the water’s surface. But I realized that this picture wasn’t about all that. Rather, for me, it was about what seemed almost like a Japanese screen that divided the detail of the shore directly in front of me from the soft, hazy scene beyond, receding to the horizon. In the end I composed the scene (2:3) with the intention of cropping it to 4:5 and I got it just about right in camera, which is always reassuring (i.e., that I have some idea of what I’m doing

This is the second image that I’ve post-processed using a new workflow. David Kingham’s recommendations for adding contrast and sharpening raw images in Lr downloaded from my Fuji camera are rendering infinitely better results, in about a third the time. In the past I relied too heavily on dodging and burning to get the contrast and clarity I was hoping for. The result always meant an enormous amount of time cleaning up crushed darks, clipped highlights, and an array of haloing and other artifacts. This new (for me) process avoids most of that hassle for which I am eternally grateful. I mean, I’m not a pro so what’s the rush, right? But at this point I realize there are things I’d rather be doing other than sitting in front of a computer screen for hours on end to complete one photograph when I could be completing three. At any rate, from a technical point of view, I’m very happy with the results. The clarity and contrast feels nice and crisp with lots of fine detail but, at the same time, it doesn’t feel “fake” or overdone to me.

I’d be very interested, first, to get feedback on your emotional response to the image. But I’d also be interested to hear any feedback regarding technical aspects such as colour, clarity, contrast etc.

Really nice scene, Kerry. I think you’ve done a great job of creating some order and composition. The processing looks great and glad you’ve found a way to speed up your workflow. I wouldn’t change a thing.

I like this image a lot. The composition is quite sophisticated and there is a sense of looking through the trees at what is beyond them. I think that was your intent. As I looked at the large version of this image I was drawn to how beautiful that large rock is on the opposite shore. Then I saw the wonderful log to the right. And then the small rock barely rising. At that point I decided that despite the nice evenly spaced trees the most interesting part for me was the lower 40% of the image. And then I read your comment below.

It was a pretty chaotic scene, especially the foreground water. Lots of interesting remnants of long-ago trees downed with many more still rooted and sticking up from below the water’s surface. But I realized that this picture wasn’t about all that.

I guess I found the chaos attractive. Here’s a different view of your subject that I like. It’s so different from the original that it’s not a version of it but I just wanted to draw attention to it since I made the effort to look at it. I found this small scene beautiful. 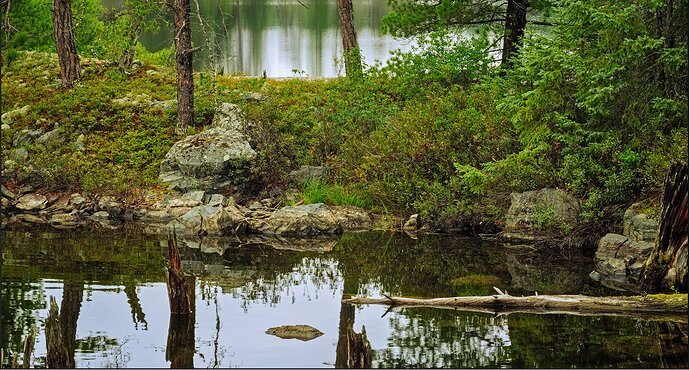 The strong sense of vertical lines plus the clear separation of the background gives me a nature is inaccessible vibe. As if nature is trying to keep away, keep apart and keep us out. I want to go through the trees and break into the scene, but there is a barrier. Inaccessibility. Longing.

Emotionally, I love this. I love the flat light that makes the colors feel so rich. Your arrangement of the elements in the frame is pleasing. I don’t get a keep-out vibe though (from the screen of tall trees), just a bit of an impediment to traveling to the far shore.

Technically, it looks perfect to me. I especially like that you don’t have odd color halos around all the tiny branches and twigs that are against the white sky.

Beautifully composed and processed Kerry. For me, my favorite part of this scene is the background trees in the distance in that soft, almost fogged in glow and how I have to peak through the screen of trees to see it. I also like how there are three pine trees with very neutral colored trunks and then a pine with an almost pure black trunk next to them. I love the foreground inclusion of the stumps, the rocks, the downed trees and logs, and the reflections and it doesn’t over compete with lake beyond. I feel like the foreground draws me in and the open invitation to view what’s between the trees allows me to peak at what’s beyond the thinly veiled curtain. This image allows me to be immersive in a subtle way.

@David_Bostock - As always, David, thanks for your comments. I hadn’t really given much thought to how raw images are converted and just assumed that Lr was doing all that could be done on that score all on its own. David Kingham was very helpful in tuning me in to a more sophisticated approach and a few days ago brought DxO PureRaw to my attention. This is a raw converter plug-in for most sensor types that has been around for a while but it was only a couple of weeks ago that they offered an upgrade capable of handling the X-Trans sensors native to Fujifilm x-series cameras. I’m going to give that technology a go. All of this AI technology applied to photo post processing is truly remarkable. By doing a lot of the technical grunt work, AI opens up more time for us to focus on the art of photography.
@Igor_Doncov - Thank you, Igor. Indeed, that was my intention. I wanted to share my sense of those trees as a screen that allows the reader the same feeling of “peeking through” as I had when I encountered the scene. I agree with you, that the shore line is compelling but not to the point of your suggested edit, which is obviously an entirely different picture that would best be composed in camera. That being said, your comments here really helped me with my most recent posting where, remembering your suggestion for this picture motivated my choice for a fairly radical crop to get to the heart of what I wanted to share (another compelling shore line). So, much thanks for all that.
@Kris_Smith - thanks for your thoughtful sharing, Kristen. It’s interesting that you experienced the “screen” of trees as a barrier, keeping you away whereas I experienced it as more of a seduction, drawing me in. How cool is that!
@Bonnie_Lampley - Thanks so much, Bonnie. I always appreciate your insight. I’m with you in that I found the screen of trees more in line with the “dance of the seven veils” - seductive rather than prohibitive. And yes, I can’t tell you how sick I have become of the time spent cleaning up halos and artifacts. David Kingham’s suggestions for raw conversion has been a huge blessing. He has also pointed me to DxO raw converter plug-in that is now compatible with X-trans sensors (Fuji), so I’m looking forward to seeing if the grunt work aspect of my workflow can be speeded up even more.
@David_Haynes - Well, Igor likes the foreground and you like the background. I must be doing something right!

As for the single dark tree trunk - you know what “they” say: sometimes it’s better to be lucky than good. And yeah, the “thinly veiled curtain” feel is exactly what I was aiming for so, glad to hear that works for you.
@GEGJr - Thanks for taking the time to look and comment. Much appreciated.

Yeah, I sort of regret the rework I offered. Sometimes you help and sometimes you don’t. I felt compelled to write something. Perhaps that’s not always necessary.