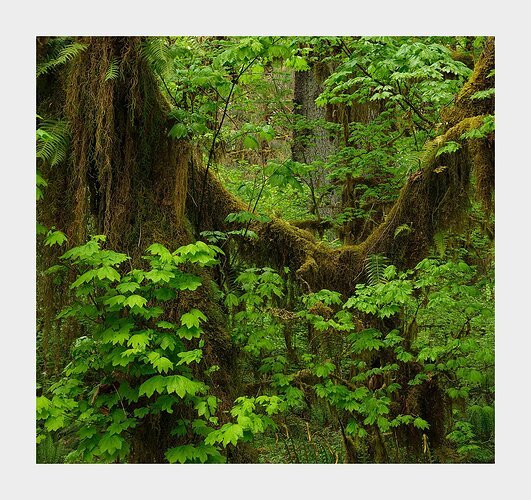 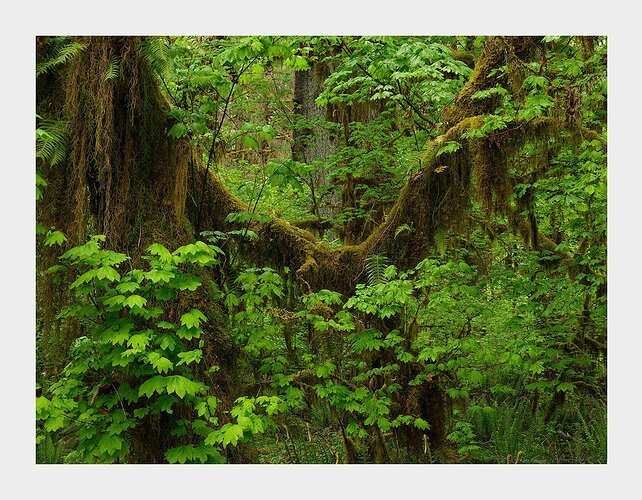 It was so incredibly wet at HOH a couple of weeks ago. It rained all day and the sun never came out. The place is enchanting but the lack of sunlight got to me after a week. The light, however, is a photographer’s dream and that’s why I went there. There was a green glow everywhere you looked. Finding compositions was another matter. The place is a bit overwhelming actually. There is moss and maples and ferns everywhere growing on top of one another. And somehow out of all this confusion you’re supposed to make some sense. The campgrounds were pretty much empty. So that was a positive as well. Yet there were many day trip visitors.

This was a scene I saw while returning from a bathroom visit of all things. It’s a bit like last year’s image but the colors are different. That’s one thing I learned. The greens are more yellowish early in the season and the leaves get a darker green as the summer wears on.

I’m interested in what you think. I also have a more squarish crop of this image that I sort of like but this original vision may be just a tad better.

Let me start with what I love about this image - the colour and the light. Well, duh! But really, you are so right about the kind of diffuse light that comes through on days like this one. Absolutely my favourite and you’ve really nailed it, I can feel moisture. The detail is wonderful, especially the moss. In terms of composition, what makes this image as compelling as it is, is not only the way the mossy “v” frames the scene but how that is mirrored above by the arc of the leaves. But all that would be for naught if it weren’t for the brighter tree bark peaking through in the background. That all being said, I have to say that I feel a bit frustrated by so much of the lower part of the frame blocking my sight line. While everything below the “V” is quite beautiful, I don’t think it is quite what the picture is about, at least not for me. I wish the camera had been tilted up or raised a little higher or maybe closer so I would have more opportunity to see through the frame. Would have been a different picture, I guess but I feel like I’m hitting a bit of a wall and feel myself wanting to get in a bit closer. But come to think of it, I’m wondering if a tighter crop is all it is about for me - a little off both sides and some off the bottom. Still, the colour and light are gloriously rich.

I think I understand what you mean. You would like a composition where the moss and the very top foliage formed a frame into the more distant trees and foliage. Aside from the sweep of the branch with hanging moss I felt that the leaves in the lower left quadrant were the point of focus in this image. In fact, I have some images that focused more on the moss and cropped more of the lower leaves and felt as though it had been cut off below indiscriminately (the way you often see people cut off a field of flowers). BTW, here is the square crop:

The light here is just stunning. I would want to just sit and stare at this scenery for hours. The only real issue I have with the original image is that there is no identifiable subject inside the “V” frame made by the tree trunks, so my eye ends up circling the image. However, the square crop is stronger and brings those leaves in the lower left forward as the clear subject. My eye starts there and then tracks up and around the “V” made by the tree. The square crop is a keeper. Nice work!

Spectacular image, Igor. Stunning light! I live in Phoenix, where it is just two degrees “cooler” than hell, and looking at this image, well, it transported me right into this beautiful forest scene. Both crops are really nice, but the square one would be my first choice.; it is a bit more intimate, and makes me appreciate this image even more.
Thank you again for the “cooling escape”!

…s and foliage. Aside from the sweep of the branch with hanging moss I felt that the leaves in the lower left quadrant were the point of focus in this image. In fact, I have some images that focused more on the moss and cropped more of the lower leaves and felt as though it had been cut off below indiscriminately (the way you often see people cut off a field of flowers). BTW, here is the square crop:

I have to say that I prefer the square crop. There is a certain “voyeuristic” quality to this image - looking through to a hidden place - that, for me at least, feels heightened in the square crop.

Fantastic image Igor! The diffused light the contrasting greens in the moss and leaves are quite nice. While I do like the square crop over the original, it feels a bit heavy on the left side. Perhaps a crop just to the right of the right most branch would work. Overall, the image leaves me with a calming feeling.

The color and light is just fantastic in this image. Your excellent composition with the V shape and so on has also made some order of the chaos, making this a great image. I prefer your original posting.

Thanks, Ola. It’s nice to hear from you again. It’s been a while if I’m not mistaken. I really enjoyed your images last year.

Igor, my favorite place to go in the PNW is The Olympic National Park. It’s also, as you said, one of the most difficult places to photograph. The order in the chaos is hard to find.

You were successful here though. I like the first one for the colors and the separation created by the V. I like the second one for the view through the V. Great image and wonderful story too.

This a beautiful scene Igor. I like both formats, but I think I prefer the landscape format because it leaves a bit more breathing room for the curving branch which I feel places more emphasis on that element of the image which I think is the primary focal point. The vibrant green leaves compliment the scene nicely. Your compositions are always carefully composed so no nits from me.

This is quite wonderful - you did a GREAT job encapsulating just about everything that is the rain forest (all those things you mentioned.) The light just beautiful as others have commented.

While I have been gravitating to the square format, I prefer the standard horizontal format you’ve presented. The primary reason for this preference is the dipping curve of the central branch - it seems by your capture that this is the central anchor anyway - and the wider view emphasizes that sweeping curve of the branch. Everything else is complimentary and all combined are making for a terrific capture - from a most difficult and overwhelming environment. Well done.

Thank you for your comments and suggestions. I guess it’s safe now to tell you why I made the square crop without influencing you. I thought the lrc was weak. All the good stuff was in the left part of the image. The crop was meant to eliminate what I felt was the image’s weakness. However, in the process I chopped part of the mossy arc and that was not good. So, I feel the choice is 6 of one and 1/2 dozen of the other. On to the next image.

I really don’t have anything new to add but I just wanted to say that I’m really enjoying this image. Or should I say these images. I do like both crop versions equally.

I don’t have much to add except to say that I think I prefer the landscape version although it’s a close call. To me, the composition with the beautiful “V” formation makes you want to see what it’s framing. That nice tree dead center of the “V” in the background. I’m with @Kerry_Gordon in that I want to see more of that tree but it’s also like the foreground is holding up a veil so that you can only make out bits and pieces of what really back there. It’s secretive but it lures you in for more. I feel like maybe I’m not supposed to see any more than I’m given and that also makes this very intriguing. As has already been said, those overcast, wet days in the PNW make for soft, stunning light. You were richly rewarded.