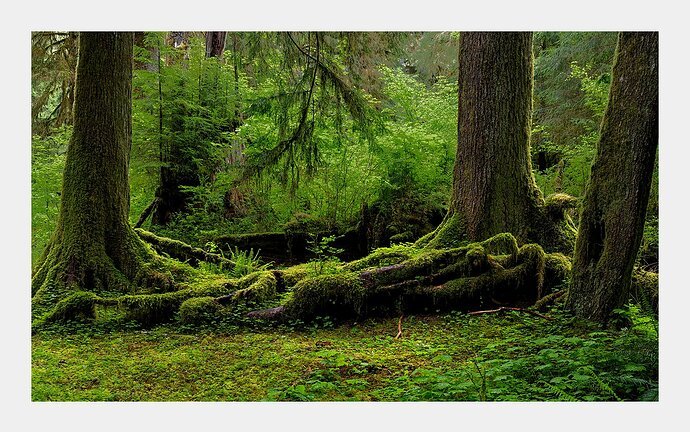 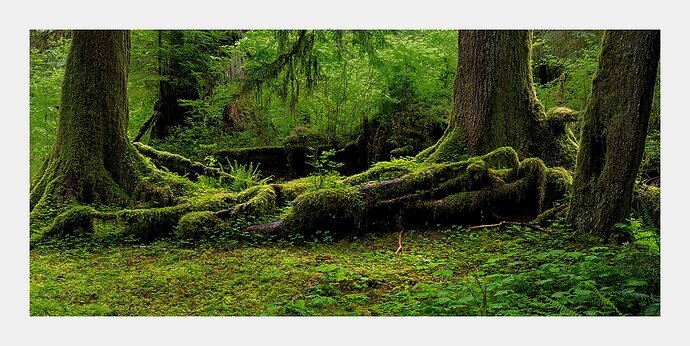 This image was made from along the Hoh RiverTrail in Washington. What attracted me immediately to this scene were the roots with the glowing moss in this dark alcove. So it was the glowing roots that I found fascinating. I initially took a narrower image with the camera to basically make the point about the roots. But during processing I added more and more of the background, thus making the image higher.

Well, I might s well show you the narrow version as well. I feel that the color saturation is border line too much. Do you agree? Too saturated? Which version do you prefer?

Wonderful image. I have struggled to capture old growth that is satisfying to me and I am still working on it. I like the narrower version as it highlights the most intriguing part of the image. The saturation is ok but I would not go any further and bringing it back would not detract. The only suggestion I have is to try and bring out a little more detail in the shadow of the fallen log. Nicely done

This is a beautiful scene, well captured. I prefer the higher image, which tells a bit more about the surroundings. For me, the roots are clearly the main subject, also in the higher image. But I like the extra information.
The saturation is on the edge, in my opinion, but these mosses can be very saturated green. I agree with @Don_Jacobson that the image wouldn’t suffer from a little decrease in saturation. Process it to your taste, I’d say.

…that I found fascinating. I initially took a narrower image with the camera to basically make the point about the roots. But during processing I added more and more of the background, thus making the image higher.Well, I might s well show you the narrow version as well. I feel that the color saturation is border line too much. Do you agree? Too saturated? Which version do you prefer?GFX50R, 45-100mm

I like the first image best. It feels more inviting like I could walk through the trees. The narrow image feels kind of claustrophobic to me. But I really love how you were able to capture this scene. I find these scenes really hard to capture because it is so messy and there is so much going on. But I feel like your composition really somehow brings out the fallen tree and the standing trees on either side. And I don’t think the green is too saturated, I feel like it looks exactly like I see the woods in the PNW. Really well done!

Hi, Igor. Having hiked that very trail you mentioned, I know how intense the green color is in that area. So, the saturation is realistic to my eyes. You captured that well and it’s not overdone.

I am curious as to what you said about the roots having attracted you. Did you try a different composition closer to the roots in one of those trees to concentrate on your subject? I do like the narrow crop better because it eliminates any distractions (such as those hanging branches in the middle of the photo). I would go even farther as to suggest perhaps a vertical crop showing only the large tree next to the roots (see image enclosed). I understand that the tree on the right edge of the frame may not allow that. Anyway, this suggestion could likely emphasize even more the beauty of those roots. I don’t know how much cropping you have done from the original image.

This is a very inviting scene you captured. It is so typical of the Hoh Rainforest. Your image is lush and serene. 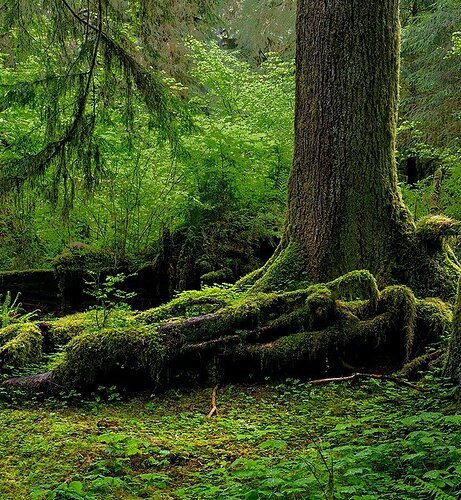 Hi, Igor. Having hiked that very trail you mentioned, I know how intense the green color is in that area. So, the saturation is realistic to my eyes. You captured that well and it’s not overdone.

I’m happy to hear that this image resonated with you and that it comes close to what you saw. I do have other images of moss growing on roots but I liked them less. I will post another image which I like more than this one but perhaps others will not agree. What made these roots different was that the moss was backlit (without any direct sunlight). So there was light coming towards the viewer in a dark place. I therefore kept the trees dark during the processing even though some detail was lost.

PS. I like your crop very much. Unfortunately the resulting image is likely around 5% of the original.

I was afraid the crop wouldn’t work. I only suggested it in hopes that you might have the same scene from a slightly different angle. In some of my own landscape photos, I have started to make different compositions of the same area, some in landscape mode and others in portrait mode.

Your image did bring back some good memories of our time at Olympic NP. I would love to return and see it all over again. Meanwhile, I hope you’ll post more photos you have. You did a great job capturing the feel of the area.

I am seriously thinking of purchasing a 100Mp camera to do just what you’ve done, to make a subset of my image and still have enough information for a decent print.

Oh, I love the “taller” version. I see a bier, with a forest princess laid to rest at the foot of the guardian trees. The drooping doug fir bough seems to be weeping over her.

The second version is claustrophobic. The horizontal logs feel like just a lump of stumps. The greens don’t look overdone to me, but if you think they’re too saturated why not dial them back just a tad?

I am seriously thinking of purchasing a 100Mp camera to do just what you’ve done, to make a subset of my image and still have enough information for a decent print.

Igor, as tempting as the thought is, for now, I’m sticking with the “Enhance” feature in LR and with Topaz Gigapixel AI. Both do a good job for my amateur needs.

Hey Igor, long time since we talked. This is a beautiful capture for sure. I find myself preferring the second version (narrow version). It puts the emphasis back where you intended it to be and shows the beauty of those roots while still allowing plenty of peripheral viewing also. The color saturation looks spot on to me (comparing it to other Hoh images). I really like the white balance as well; was the camera set for auto WB or is this something you chose?

I saw in another comment you were thinking about moving up to 100 MP. I had thought of doing the same, for the same reason, but by using Topaz Gigapixel I’ve been mostly satisfied with the results.

Lovely image! It’s a great composition, which as you know is difficult in dense forests. I think the color is fine as is and I prefer the first photo.

I think that this looks wonderful. On my computer the saturation looks spot on and my preference is for the first, not narrow version.

The saturation looks good to me Igor. My preference is the first, taller image for the same reasons @Vanessa_Hill mentioned.

Just seeing this as I have been away on business for a couple of weeks. As for the colors, this looks pretty typical of what one would see in the Hoh rainforest. I’ll be there next month on this very trail. Can’t wait. I much prefer the original because I actually love the drooping branch coming into the scene in the top center of the image and it just feels less squashed to me. I might add just a smidge of light to the darkest areas particularly that fallen log in the background. I totally understand that the scene is backlit so I would add just a tiny amount. The composition is well done and I like that you included the tree on the right side. You’ve tamed the chaos that is so hard to do in these forests. This is a very nice image

Well done, Igor! For all the beauty of the Hoh Rainforest, it is not easy to make sure an aesthetically pleasing image. I prefer the larger image and seeing more of the environment of the roots and trees.

@GregVaughn, I used your book to time this trip. I wanted to capture images when the plants were at their lushest. I think that varies from year to year because I came a bit too early. The fern stalks were still unravelling and last year’s brown stalks were still attached. They had a cold Spring this year and everything is a bit late.

I’ll be there next month on this very trail. Can’t wait

This is on your left about 1/4 of a mile from where the trail starts. In my opinion the Hall of Mosses Trail is not the best one even though it’s touted to be so and most visitors go there. Due to it’s usage you are highly restricted in movement which makes for cliche compositions. The Cedar Trail is better but not very long. Last year’s images were all made there. There is some room for maneuverability there ( =< 15 feet from trail ). There seems to be good stretches of potential subjects just outside the park as well. But it has all been logged so composition of stumps and reclining wood in that area.

My preference is the first, taller image for the same reasons @Vanessa Hill mentioned.

I agree with you two on that.

I had thought of doing the same, for the same reason, but by using Topaz Gigapixel I’ve been mostly satisfied with the results.

I have rented the 100Mp so will compare the results. Hard to believe that manufactured data is as good as real data but who knows. At this point I’m suspicious even though the reviews are fabulous.

I much prefer the first, taller version. The narrow one feels cramped - which might have more to do with the aspect ratio than the content. The colours are gorgeous and I think in this case, given the subject and locale, the level of saturation is appropriate and really draws me into the physical feel of the rainforest. I love that you’ve included the three trees because it does give the image balance and a sense of groundedness. It feels like these three trees have gathered to pay homage to those that have gone before. I am being a bit sentimental, I know, but it has been clearly demonstrated that trees are social, conscious beings. Imagine that - intelligence without the need of a brain!!

Hi Igor, I prefer the original too. I think it has a feeling of majesty that the narrow version loses somewhat.

Not too saturated at all, this is what the rainforest looks like, especially if you used a polarizer which it looks like you did.

There’s a sense of balance and depth to this that is sometimes hard to get in forest images.

Put me down for another vote on the original comp. While I do like the emphasis on the longer root system in the crop, I think the overall impression and the “order from chaos” sense is much greater in the broader view; it tells more of a story - including show casing the glow and presence of the roots.

My only nit here is the dark, detail-less shadow areas. I realize this is the nature of the beast deep inside the rain forest, but at the same time almost seems like a departure from your photographic and processing style (a good thing, in that your skills and processing are diverse!)

Too the saturation question, no, this isn’t too much. The yellow greens of the rain forest can often be very subjective, but I’d say you’ve processed and presented the colors(/sat) just right.