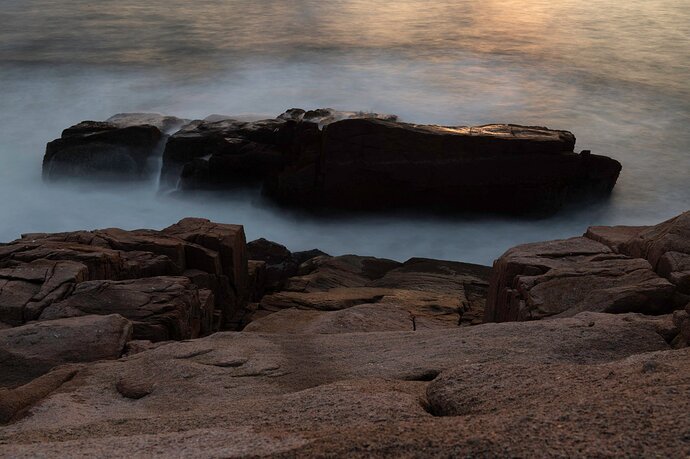 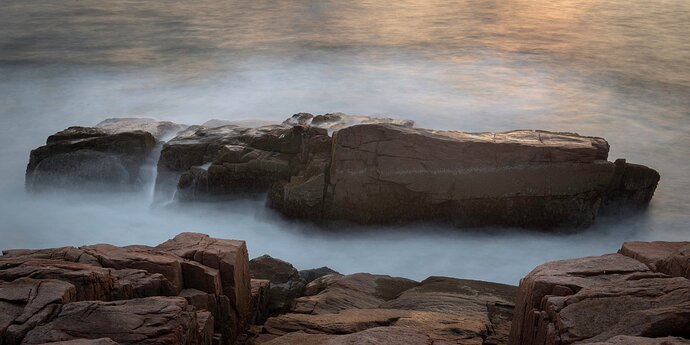 This was taken in Acadia on a fall workshop.

Have been away from NPN for a while and getting back into post processing. Any constructive feedback is helpful. Enclosed are raw shot and post processed.

Would appreciate comments on the post processing and final image as a whole. All comments welcomed.

Is this a composite: No
This was shot at 15 sec f/22 with 24-70 lens. I corrected the exposure, adjusted the contrast and cropped it using using LR . I also spot removed bird droppings on the rocks and removed seagull ghosts from the long exposure.

I prefer the raw version to the processed one. It’s richer in tones and has greater emotional weight. I can see that a bit of cropping could improve but not much.

I’ll vote for the processed (second) version, but the midtones on the large rock could have more contrast, which may need masking. I also prefer the darker water on the raw file. There might be a happy median in there.

I agree with @Igor_Doncov that there is more drama and emotion in the unprocessed image. The darker water and shadows add some nice mood to the image. Just because it’s technically possible to significantly lift shadows doesn’t mean that it is always the best thing to do. Your processed image has not lifted shadows to the point where it becomes too HDR-ish looking, but the lifted shadows rob the image of some of it’s drama.

I do think your choice to crop the composition in the processed version is a good one. To me this image is about the water and the center rock, all you need the foreground rock for is to create some framing.

I would go with the composition of the process image, but tweak the processing to restore some richness to the shadows, and darken the water at the top.

Thanks for the feedback. I agree with @Igor_Doncov and @Ed_McGuirk that the darker rock carries more emotional weight. I ended up going back to the original file for rework. I kept the crop as shown in the second photo along with the darker water as @Diane_Miller suggested. The rock was lightened enough to accentuate the white horizontal streak .