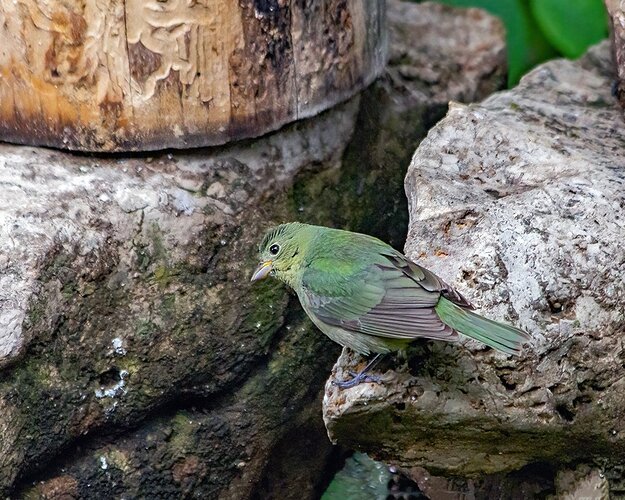 As I’ve noted in another post of this bird, female and immature male Painted Buntings are virtually indistinguishable. However, based on the fact this bird has been around for a few weeks (assuming it’s the same bird) and hasn’t attracted a male suitor, I’m going to assume this is an immature male.

Well, that sounds like one way to make the sex determination! A nice image of this bird, Terry. I like the little head turn. It looks like you’re starting to accumulate some bird doo on the rocks in your setup that you might want to clone over as the bright spots do tend to draw the eye.

Thanks, Dennis. (Mental note concerning the poo.) Probably time to break out the power washer!

Looks like a nice species, never seen one ! It looks like you hadn’t a lot of light and the high ISO shows a bit on the larger version. That said, I do like the setting and the pose, and the colours of the bird -more than enough to like! Cheers, Hans

A very fine image here Terry. I like the head turn, detail, and setting. The exposure is right on. Although I generally don’t like close crops, you could easily drop the top to just below the wooden stump and move in a tad on the left side.

Thanks, David. I always worry about cropping too tightly.

Probably time to break out the power washer!

I ctually try to avoid too much washing as I like the accumulation of algae and grime on the rocks to give them character. I do flush them down fairly often to get rid of the loose stuff. Mine are under fir trees so they accumulate needles continuously.

You captured a nice head turn and I like how the color of the bird stands out from the BG. Well done…Jim