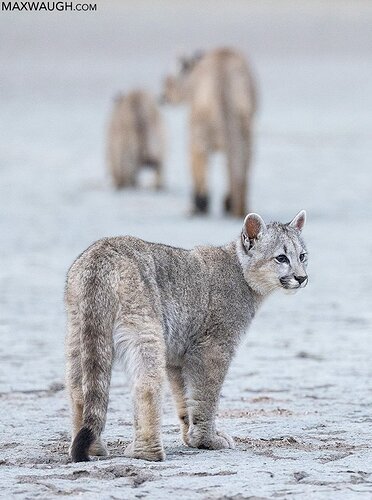 One of the highlights of my most recent Patagonia tour was the time we spent with this puma family. Our local guides like to prep guests for the “puma walk” ahead of time (including discussing proper decorum around these animals at close range), but nothing really prepares folks for the experience of having a mother lead her family right past you like this. It’s always special and sort of sets the tone for the trip. In this case, we were able to spend a good half hour or more on foot with them as she patrolled her territory, highlighted by the route they took across this dried pond (which gave us our best clear views of the family, if only for a few moments).

Wow! This is so amazing and beautiful. I hope I can do one of your workshops sometime, just to be that close would be thrilling!

You positioned yourself so well for this evocative shot. Were you in a hide? I love the contrast of pale grey pond and darker cub. Wonderful shot, Max.

WOW!! As a cat person, I am SO JEALOUS!! This youngster is gorgeous! What a wonderful family portrait, and worth the whole trip, in my estimation!

Mike, not in a hide. Literally walking along with them at times. In this case, the cubs were playing in some thick scrub, so we stationed ourselves back from it to see if they’d come out. They eventually did, coming right in our direction. In such cases it’s often best to just stay still as a group and let the cats choose where they go next. The mom walked right through us (she could have gone left or right, but found a gap and casually strolled between two of my guests) while leaving her cubs to romp in the grass behind. They eventually followed, choosing the same path through the people and then following her out onto the dried mud. I knelt down and photographed from where we had been standing to get this shot.

The casual behavior of the cats in that area often raises questions from folks who haven’t visited. There have been accusations of baiting, but it’s something I’ve never witnessed, and frankly, it’s simply not necessary. You have a high concentration of pumas in a relatively confined area both within and outside the park boundary… and there’s plenty of food—primarily guanacos, but the occasional escaped ranch sheep as well—that keeps them in the area. Puma tourism started up around twenty years ago, and it took some time for the cats to become acclimated to people, but they eventually recognized them as not being any sort of threat. The abundance of food also means the pumas don’t recognize people as meals… I believe the last human fatality there at the hands of a cat was forty years ago.

The females in particular have been divvying up territory to their daughters in recent generations. We saw a lot of evidence of that, as we had, at one point, as many as four different females in a small area sharing kills. Three were related (a mother and her dispersed, grown daughters from two separate litters), and another was a long-time resident of the area that is almost sort of an “auntie” to the youngsters. At some point, I expect the population will reach some sort of breaking point. Word is that many of the younger guanacos have been killed off in recent years, and I suspect the ecosystem won’t be able to hold this expanding collection of females much longer without some sort of significant change. Either we’re going to see more females dispersing farther out (most of the nearby ranches are now puma-friendly so in theory there’s room to carve out new homes, but one of the closest properties is not and is estimating to shoot as many as 100 cats a year to protect their sheep)… or there just won’t be as many successful litters.

As for males, there are probably only one or two truly dominant ones in the area, and they’re typically much shyer around people than the females… most likely because their territorial coverage takes them into areas that don’t have nearly as much tourist traffic, so they’re not as acclimated to the attention. We only saw one grown male on this trip, just rounding into form at about 4.5 years old, but already a hefty lad. He grew up in the area around the ranch, so was more used to people, but as he reaches peak maturity it will be interesting to see if he can take on the big boss (a dark gray male I’ve seen in the past, who came in from outside the territory and doesn’t hang around people for long) and remain in the area.

It’s pretty fascinating to see how things evolve with the cats down there. There’s now a couple decades of informal observation by local guides and the many film crews that have worked the area, and I have been able to see several generations of cubs from the same mothers since I first started visiting for cats. I liken it in some ways to the wolf tracking and studies going on in Yellowstone, in terms of being able to trace lineages and family histories over an extended period… just without all the ugly radio collars.

That’s really interesting. Max - and good to hear about one of the places where large animals and humans can still coexist pretty peacefully.

A wonderful image, meticulously executed !
I just love the precise positioning of subjects, within the frame !
Cheers

A wonderful image, and I highly appreciate the background information that you shared.

Great shot Max and a wonderful story to go with the photo. Awesome…Jim