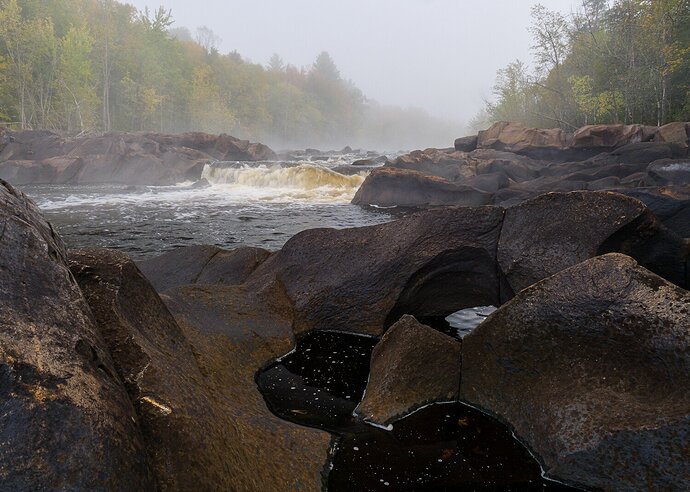 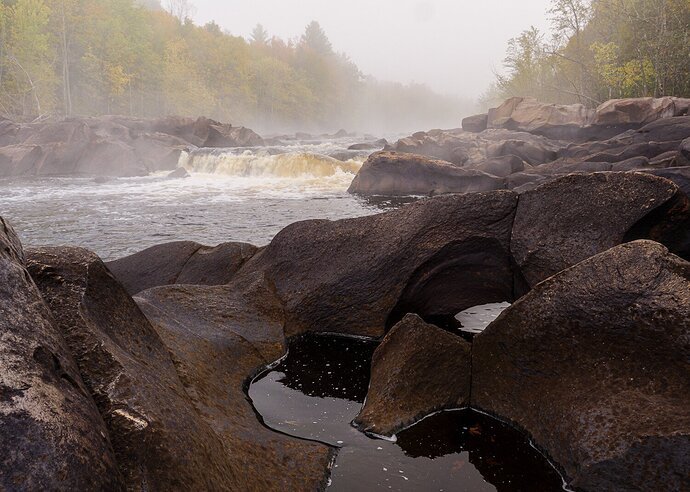 And with the white balance nudged slightly cooler - 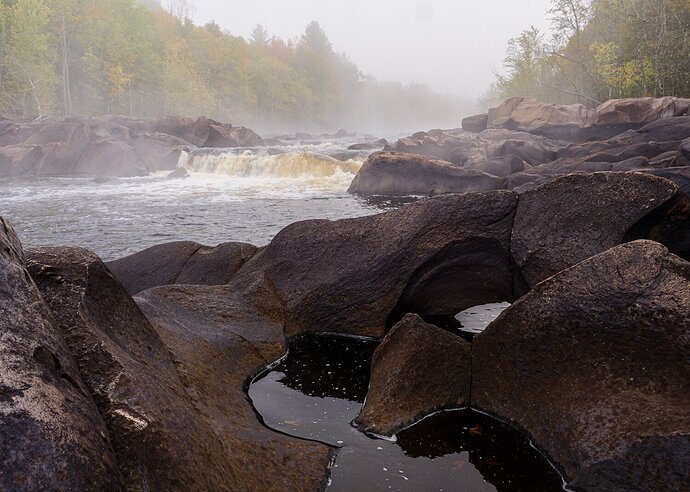 A blend of the top part of the first image with the reflecting pools bottom half as per Diane’s suggestion. It’s the first time I’ve done this so be patient. 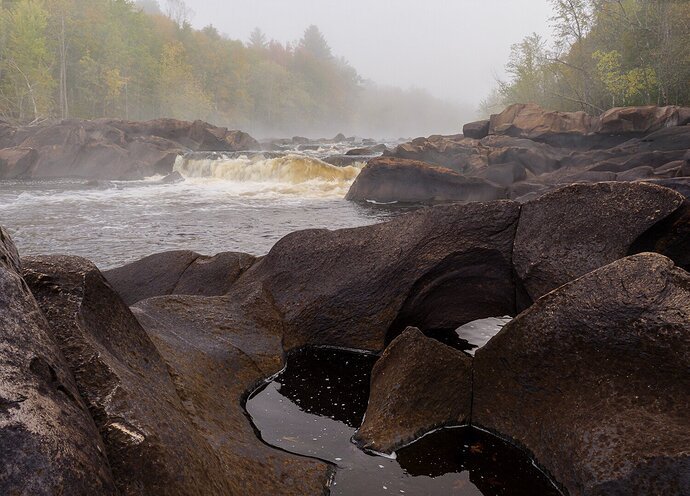 It’s amazing the difference a polarizer makes on everything in the photo.

Last month when there was fog on the Wisconsin, I headed over to the Grandfather Falls section to see what I could see. At first it was about the fog, but then it became about the rock. The enduring, everlasting bedrock that has been shaped by the will of the water. Normally a lot of this is concealed by the river itself, but it was low both from seasonal causality and because of the many dams along its length.

I lived with this and other images from my session here, but wasn’t happy with anything I shot until I started thinking about balance and intent. Other shots have basically a 50/50 view and didn’t work. They weren’t saying anything loud enough. Is it a photo about the water or the riverbed? None said much so I went through them again and found that I had done a better job shifting that ratio either to the falls or to the rock. I think the voice of the river comes through here, but it’s a bass note. The bottom range. The bedrock.

I want to make apparent the state of the rock and the cause - the connection between water and granite. Does it work? Is it too weird?

Is this a composite: No
Handheld while trying not to kill myself on the rocks - they basically all look like this - not a flat area to stand or set a tripod firmly. Slippery as hell. 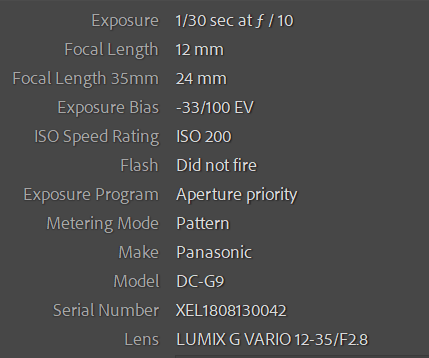 Lightroom for a little crop, wb adjustment, transform & lens correction. Used a couple of graduated filters to improve the contrast below and the haze above. Also used several local adjustment brushes to enhance the contour in the rock.

I think you accomplished your intent here, Kris. I like the strong foreground, the wonderful mid-ground, and the mysterious background. Excellent image.

The balance between the river and the rocks works for me. And the scene fading into the fog is beautiful. I think the darkness of the pools of water in the foreground rocks is a bit too dark though. You lose the connection between the flowing water in the river and that in the eroded bowls. It may not have been possible, but if you could have moved so the foreground water was reflecting more of the sky I think that would have made a better connection. Maybe you could just dodge them a bit?

I’ll give it a try, @Bonnie_Lampley - probably I should have tried it with the polarizer in the off position. I did that with some other pools, but I’m not sure about this one. Will have to look.

Ok, well I wasn’t completely stupid while standing on those rocks. I found a couple of shots with the polarizer in a different position to allow surface reflection. Because it shows the water in the two places and it makes the connection between the state of the rock and the cause - just as Bonnie pointed out. How did I miss that?

Many thanks to you and everyone who contributes to make our images better.

I think the warm version without the polarizer is my favorite (so far). It seems less contrasty.

Interesting image and discussion! I do like seeing the surface of the water in the lower pools, but I prefer the top half in the first version. I’d be tempted to do a composite.

Thanks @Igor_Doncov & @Diane_Miller - you could be right about the lower contrast being more in harmony with the fogginess and I could try blending. I have NEVER done that in my life so…it’s going to be a trial by pixels. They are shot at slightly different focal lengths and so I’m not sure they will line up right for blending, but maybe I will get brave.

Might be easy! Layer the 2 shots, select both and do Edit > Auto-align Layers to make them match. Then add a mask to the top one and brush away the areas you don’t want. If the exposure is different, do a Curves above the top one, group it with that layer to only affect it and tweak away. Alt-click on the mask to see if you missed any spots.

Well it wasn’t ‘easy’, but I think I figured it out after reviewing some video and finding a tutorial for idiots on the web. The geometry doesn’t line up quite well as you can see in the progression of images as you change from the single image to the composite, but if you look at it separately it works. I prefer the background in the reflecting pools shot, but thought I’d give it a try anyway since it’s a new thing for me.

Kris, I like the rework that is the 4th image the best. This image and series of rework provides an interesting case study in what a polarizer can do to an image. To me the less polarized foreground water feels more in balance with the foggy background, I like seeing the highlights in the foreground pools. A polarizer can also reduce the misty effect of fog, and I prefer the hazier, warmer look of the fog and trees in image #4.

As a matter of personal preference, in image #4, I would prefer to see the water beneath the falls to be slightly darker, to make the white water pop a bit more. 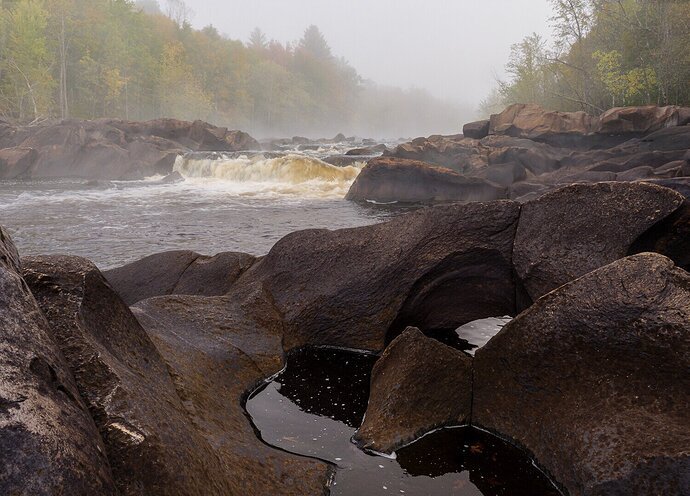 Now that you have played with blending, maybe it’s time to visit Tony Kuyper’s website and go down the rabbit hole with luminosity masks.

I used an LM above to darken the water above without affecting the rocks.

Now that you have played with blending, maybe it’s time to visit Tony Kuyper’s website and go down the rabbit hole with luminosity masks.

Thanks, @Ed_McGuirk - I bit the bullet and got TK8 combo panels recently. Tony had a bundle with Sean’s videos about the new panels and so I have both and am trying to bite things off in small mouthfuls. I’ve had the free TK6 luminosity mask panel for a while now, but didn’t dive too deeply (oh my painfully mixed metaphors), so now is my opportunity. I guess my issue is brush v. mask. I feel like I have more control with the brush, but I know the mask is a different control that I’ll have to come to terms with. Baby steps.

I guess my issue is brush v. mask. I feel like I have more control with the brush, but I know the mask is a different control that I’ll have to come to terms with. Baby steps.

Once you have time to digest the videos, you will see how much more control you can get from dodging and burning thru luminosity mask selections. The masks are so feathered you don’t have to worry about painting too far into areas you don’t want to affect. It has a learning curve, but learning how to dodge and burn thru masks is my most used function for TK.

I do like your non-polarized version by itself. The more atmospheric background works well to give lots of depth to that version. I’ll echo Ed’s comment about dodging/burning through luminosity masks. It’s really powerful. And since we’re all taking a crack at this one

, I’ll chime in with an idea to dodge the foreground pools, to make their light tones more coincident with the water in the back. And bringing out a bit more detail in the foreground rocks, all done by d/b through lum masks. 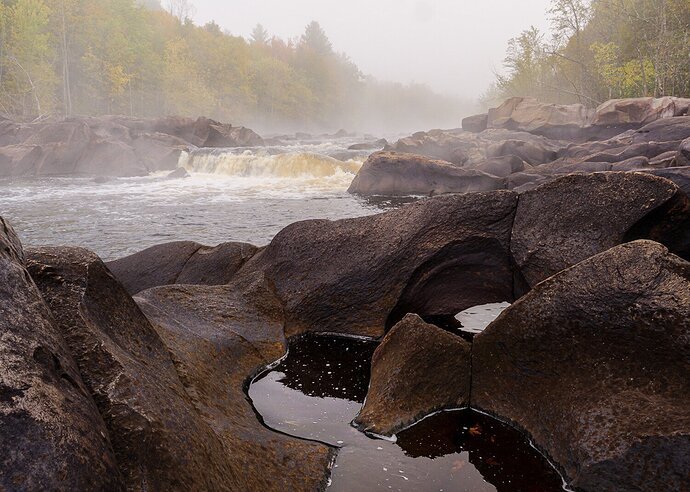 I’ll chime in with an idea to dodge the foreground pools, to make their light tones more coincident with the water in the back. And bringing out a bit more detail in the foreground rocks, all done by d/b through lum masks.

You are really throwing the gauntlet down, lady!

I’ll have a go. I like the gentler presentation and had originally darkened the rocks thinking it was enhancing them…their essential rockiness if you know what I mean. Now I see that it might not serve the whole. Hm. I love this back and forth and different ideas. And I’ll see how much of the TK masking concepts I can absorb. With all of the new (I think it’s new) masking and tweaking options, it’s even more controllable, but also more nebulous in a way.