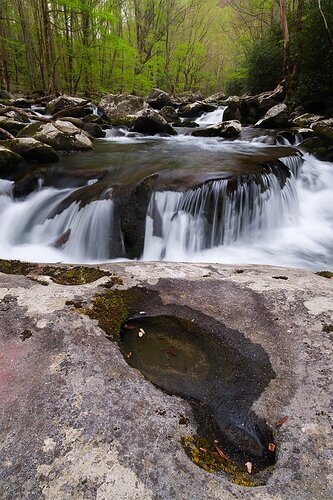 Took this image last Saturday in the Tremont are of the Smokey Mountains.

An interesting location to be sure, but honestly I don’t know what you want me to look at in this image - the hole in the rock or the cascade? Using extreme foreground elements like this is tricky. They have to catch and lead the eye through the picture. The abrupt demarcation of the rock then the water in the distance doesn’t accomplish this. The break is too abrupt and splits the picture in two. IMO it would be more effective if you had actually taken and presented two photos. Flowing water over rocks can give you so many leading lines and juxtapositions to play with so keep at it!

The processing and exposure look pretty good and I’m so happy your water doesn’t look like mouthwash! The stack looks good and the shutter speed wasn’t so long that all the character in the water was lost. Looks like a great brook and I hope to see more of it.

I pretty much agree with Kristen’s analysis. The fg should lead into the bg rather than offset it.

Hey Shawn…I just got back from a week at GSMNP and spent the majority of my time in Tremont. Very familiar with this iconic cascade and having shot this several times over the past few years, I’m still not sure I have an image I’m happy with.

Anyway, what struck me most when presented with this image was the division at ~50% of the FG rock and BG cascade/river/trees. As I endeavor to interpret the scene as presented, the “visual weight” of the foreground element is very prominent and dominates the “story”…so much so that the rock gets a “loud voice” in the image, but to my interpretation, dwarfs the more dominant elements of this location, the river and surrounding forest.

For me, this location in Tremont is primarily about the river falling quickly in a short distance, and the surrounding greenery that provides a lush backdrop for such healthy water. Yes, the rocks are an important element to the scene, but as I experience Tremont, the river speaks to me first, then the greenery of the surrounding forest, moreso than the river rocks themselves.

Please understand that the above is my interpretation, so should be received as opinion only. There’s no right or wrong answer in artistic representation of our experience in nature, but do be intentional and aware of the amount of real estate in the frame you attribute to various elements in the scene. Hope this helps!

Thanks everyone for the feedback and I agree. I felt the same but wanted confirmation.

Shawn, my opinion would be similar to the “50/50 comp” and “two subjects” comments that you have already received. The additional thought I have is that the relatively bright luminosity of the foreground draws some attention away from the falls and greenery. Viewers get attracted to the brightest things, and while the waterfall is the brightest, the foreground rocks are bright enough that they compete for attention too. This could be minimized by locally burning the rock.