Vermillion Falls (or Adventures in Dodging and Burning) 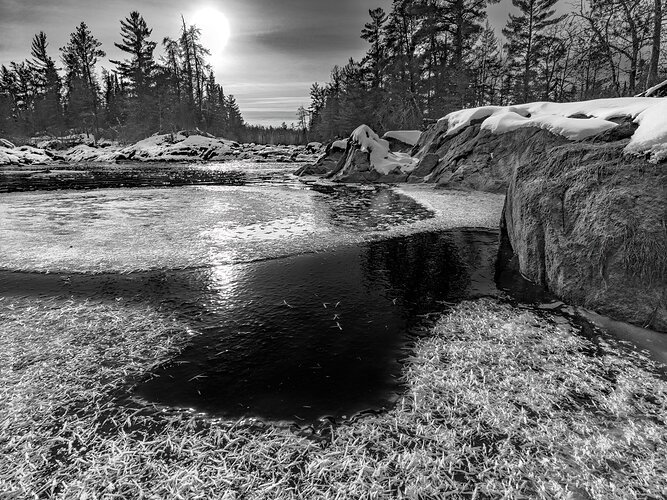 Took a nice drive into the piney part of Minnesota yesterday, looking to see how the ice was developing on the lakes and streams. High stratus clouds guaranteed it would be a black and white day, but that is fine as I really enjoy that kind of photography and would like to be better at it. At Vermillion Falls (yes, in Minnesota our “falls” are usually something less than most, but just imagine going over in a canoe), this collection of of hoar frost crystals growing on the thickening river ice, all under a flaccid sun, really embodies the feel of late November in the North Country. Makes sense, it is late November in the North County, after all.

This composition was very compelling, but rather hard to capture. I knew I wanted the camera to be just a few inches above the frost, but there a large rock right behind made it very difficult to position the tripod flat as there was no room for the third leg. Ultimately, I had to fold it back so that it stuck upright, with the tripod more or less balanced on two legs and the bottom of the shortened center post, all on traction-less ice. There was no way I could look through the view finder with this arrangement, but the glare of the sun and snow made it really difficult to see details in the LCD, too. Furthermore, I assumed that both a focus blend and an exposure blend would be necessary, so futzing with all of that took some patience. Good thing I usually stop noticing the cold when I go “on point” with a camera. My poor, long-suffering partner, who was standing in the trees behind me, is not so lucky.

On the long drive home, we listened to Matt Payne’s latest F-Stop podcast, with William McIntosh, and at one point when discussing artistic creativity, a comment was made about truly creative images being the those that no other landscape photographer would make, even if they were standing there at the same time. I’m not sure if this composition qualifies under that standard, but it is at least a little different (better or worse) than most other black and white Minnesota winter landscape images I have seen.

Is this a composite: No
Processing was even more challenging than making the image in the field, especially since I felt compelled to jump on it as soon as we got home at near 10:00 pm last night after ~15 hours in the car. I first tried the exposure blend I had expected would be necessary, with one image exposed to darken the sky enough to render the sun discernable and a second image that captured the right tone for the foreground frost crystals. But, once blended, the image really looked ridiculous, and I just about gave up. Ultimately, I tried working with only the single sky exposure, and then poured a lot of dodge and burn over various masked curves and levels adjustments to end up at this point. It still looks rather unrealistic to me, but ironically, other than the black and white, it’s actually pretty close to what the eye would see when standing there. You certainly could see the intricacies of the frost and the texture of the clouds while still being able to pull out detail in the trees. I guess the human eye has a pretty good CMOS image sensor, too.

Sony A7R III with Tamron 17-28 mm f/2.8. 17 mm, ISO 50, f/22 at 1/40 sec with a couple of hours of LR and PS processing. I also warped the top corners of the image to remove parallax distortion in the trees and cropped the sides to achieve this result.

I like it and think it’s a pretty interesting landscape. I know what you mean about north country waterfalls. Sometimes it’s all in the name and none in the reality, LOL. When I first looked at the small image I thought that the rocks could use some darkening and when I opened it larger the trees caught my eye more. They look unnaturally light in the tonal range. Kind of muddy the way shadows get when raised too much. The snow on the rock closest to the viewer looks right, but the rest of it doesn’t. Too dark. You could play with some color sliders to bring down the gray level of the greens in the trees. And some dodging in the snow on the rocks in the midground could work there. If you masked the sky, there is some residual haloing around the trees nearest the sun so finesse there could smooth that.

Good scene with lots of shapes and contours that are very pleasing. There’s a weight and gravity to the landscape that comes across well. I like the dark water in the center - frames the frost and ice so well.

It’s snowing here in Northern Wisconsin - just a little dusting and could either make or break ice photos, but I might go out and try tomorrow anyway.

I like this image very much. I like the quality of light in the sky (even though its blown out) and how it drops down to the water. In fact, the light gives this image the strong emotional impact that it has. The circle in the water is just wonderful. The only issue I see is the bright snow on the bank that doesn’t match the other frost and ice in the image. It’s a lovely and thoughtful image. Great job and thanks for sharing.

I like the composition a lot Jeff. The right side has a certain heaviness because of the boulder but it still seems pretty well balanced anyway. When zoomed in I notice that many of the trees in front of the taller pines are almost gray and I don’t know if that’s from the blending or just what the trees actually look like. They seem like ghosts. Not sure how to describe it. I like the tones that you captured in the sky even though the sun is blown out as would be expected and the ray of light going down the left middle side of the image giving the image some pop. I love the frost. Nice image Jeff.

I really like this one, Jeff. Great foreground detail and your comp really nicely leads me through the image. I would agree with the comments above about the kind of muddy look to the middle pines but not a big deal either way. This one feels nicely cold and desolate and works really well for me.