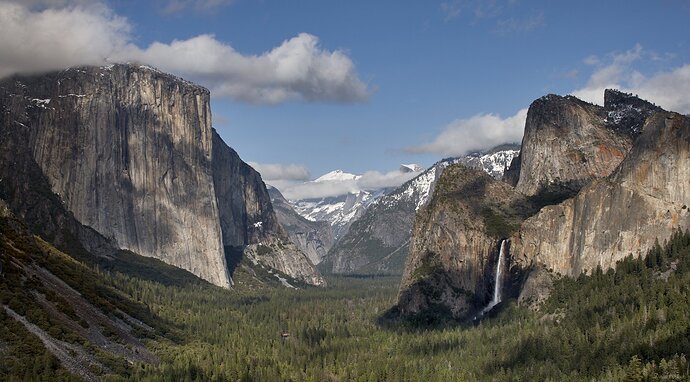 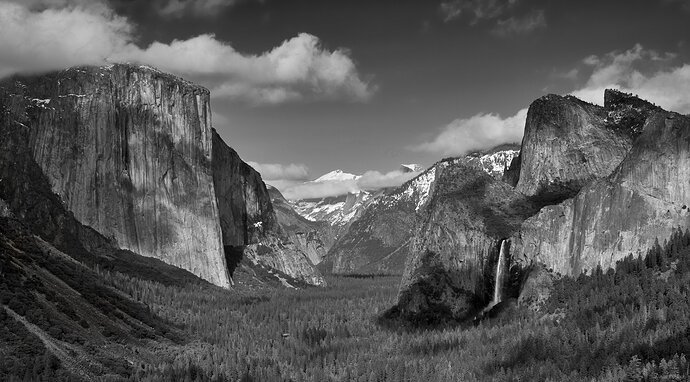 Most people take shoot this scene from Tunnel View in Yosemite. I decided to hike up the trail to Artist’s Point (following the fresh Mountain Lion tracks–dumb). I was able to get a shot without the foreground trees blocking.

That’s a terrific composition and a beautiful shot, David. You’re right; the shots I have of the valley are from Tunnel View.

No matter how often I see this it’s a spectacular view. The shadow in the Bridalveil Falls area makes the water pop which adds a punctuation to the image. In fact all the shadows worked to your advantage. The drift cloud on the left adds a lot as well. It adds to the grandeur and also acts as a frame of sorts. I would convert to B&W and add punch through clarity, contrast, or texture. There is so much natural texture in this image that you want to bring it out more. Plus you could darken the sky and make those clouds pop.

Spectacular view and spectacular photo. Igor’s B/W suggestion is intriguing. Is that a structure of some kind about mid bottom?

Well I definitely think that hiking up so as to not have the trees blocking the view was well worth it. Stunning shot and if you’re up for making a B&W version I’d definitely would love to see it.

Great view from there. I did a quickie B&W and like that version.

I agree it’s the contrast in this image that makes it work. If you want to stay in color, I might consider darkening the blue sky slightly, to create more definition in the clouds, or maybe achieve by adding some clarity to the sky instead. And as others have noted B&W would play to the strengths of the contrast already inherent in the scene.

I have never been to Yosemite, but have seen a ton of images of this location. I have noticed many images from recent years have many trees at the bottom turned red/brown from insect damage. By climbing up to Artist Point does that get you high enough that you can exclude them ? Or is this from pre-infestation?

I added a B&W version to the original post.

Yes, Ed, Artists Point is above the tree line so no pesky foreground trees.

I am going to post a version from the parking lot with the trees for comparison. Plus it’s my tribute to Mr. Adams.

It’s hard to not be influenced by AA’s work in Yosemite. But in reality the colors really don’t add that much to this image. And I don’t think boosting them or manipulating them would do it either. So, regardless of Adams this really is better in B&w. Although he gets a lot of credit for that sky.