What in the world is this?

My neighbor recently passed away and his wife asked me to go through all his photo gear and help her sell it. I came across this item and I’m totally stumped. It’s about 11"x9" for the cloth part which is attached to the hard white plastic piece. It has a large tripod type screw as seen in the photo. Anyone have clues as to what this is? 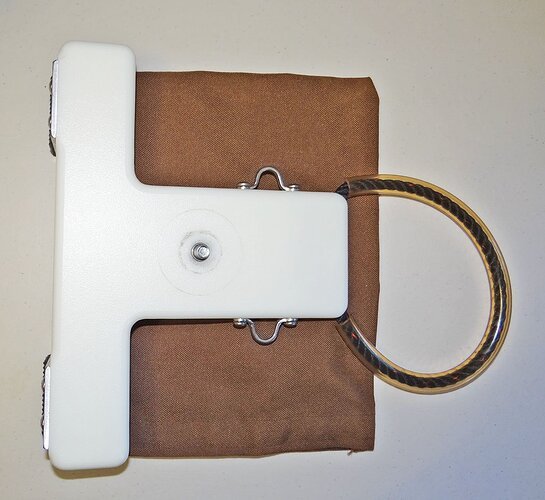 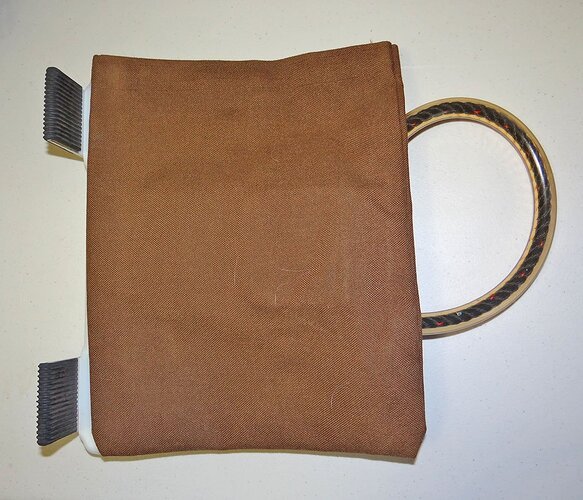 My wildest guess? If the cloth part can be opened, then sealed shut, I’d bet some kind of custom beanbag intended to mount on top of tripod legs, the loop to go over the lens barrel and the black “ledges” stops to keep the body from sliding back.

If not that, it would seem a pretty elaborate way to provide a loop for a coffee mug.

I’m in the same general camp as Hank. If the guy was into bird or wildlife photography, I’m guessing some kind of car window or blind mount. Obviously hand made and probably special purpose. I have some vaguely similar contraptions in the closet that I’ve come up with in the past.

I think you’re both right - the screw mount for a camera on the white part convinces me.
Sandy

Here’s a bit more info. I just noticed one end of the bag is velcro on the end and you can open it (it looks like there was rice inside at one point). The screw is not for a camera mount as it is way too large. It is approx. 8mm wide. Looks like it is a screw for a large tripod head mount as evidenced by the embedded scratched circular pattern around it. Everything about this is VERY heavy duty.

Definitely sounds like it was a intended for a blind or car. I have shelves in my permanent blind that have standard tripod head mounting studs in them so I can just screw in a gimbal head and I’m ready to go. Much easier than messing with a tripod in a small space. The beanbag makes me think it’s designed for portable use, like a car window or perhaps a kayak. Looks like a pretty nice design actually. With the loops on the sides, you could bungie it over a reasonable sized branch as well.

Sounds like you’re right on track with the rice discovery. I use it myself in “sand bags.” In addition to tripod legs, I have a Kirk window mount that would be well served with that on top.