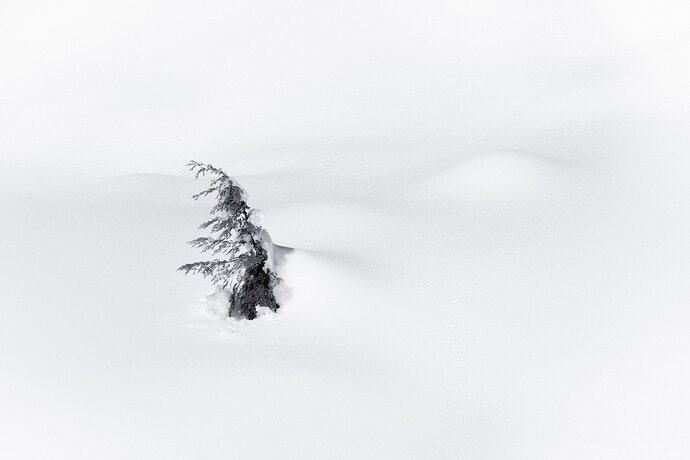 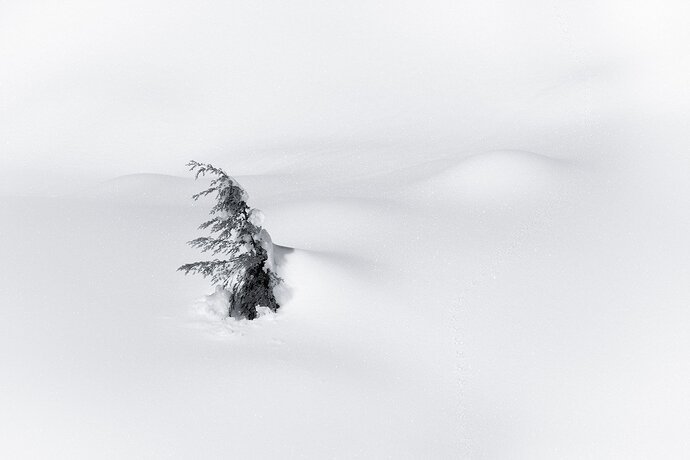 @Igor_Doncov noted in my prior post that I strongly favor flowers in front and mountains farther back, and I’m definitely guilty as charged. It’s a clichéd composition, but I’m truly a sucker for it. In the belief that we are better photographers if we “step out of the comfort zone and try something different" once in awhile though, here’s an image I took while snowshoeing last year. Since I don’t work a lot with high-key black and white images, I’d love your thoughts. Any suggestions or critiques are welcome, but I have two specific points.

I added a, very slight, reverse vignette, brightening instead of darkening. (That one line that reaches the middle edge on the left was a little more contrasted, and it kept pulling my eye there.) Anyone else ever do that? Do you think it works here?

Second, if you look close there is an animal (mouse?) track that leads from the bottom to the top in the right half of the image. The vignette reduces its affect at the borders, but should I just clone it out?

I really like the simplicity of this. I would be inclined to add in a bit more shadow detail in the snow. I think it would still retain the minimalism, but I would not have to work quite as hard to even see it there. Very nice step out from your usual flower foreground scenes.

Stunning job here! I really like this image and it’s simplicity. It’s striking and subtle.

I am a sucker for minimalist images, and black and white. This is both, and it has a lot of impact. I agree with @Harley_Goldman and might try a little subtle shadowing, but this is really wonderful as presented.

@Harley_Goldman, thanks for your thoughts too. I played with variable levels in the contrast of those subtle shadows; above is one of the versions with more for contrast.

I’m heading out the door to explore fall color for the week; hopefully the weather gods cooperate!

I am definitely no expert in B&W but I think this is a great capture! I agree with Harley in that I would love to see just a little more detail in the snow. Not sure about the animal tracks. I think you should either bring them out so they are more noticeable or get rid of them altogether. If this were my image, I would be tempted to clone those out and see how it looks. I love the minimalism here!