These mountains have long intrigued me because they look white compared to the dark red volcanic landscape of most of Baja. So off I went last week to get a closer look. For a while the road was a good dirt road that was a pleasure to drive. A right turn took me down a second road that only desert bikers used. Finally after a steep descent I was driving on the sand at the bottom of an arroyo. I came to a stop at the bottom of this impressive mountain that is reputed to have gold. After a sleepless night filled with dreams of dead batteries I woke up to this. A high cloud layer let the sun peak through it’s openings and it was just a matter of waiting until the light seemed about right in intensity. I don’t normally shoot these type of landscapes but I felt this captured the optimism that this granite provided. The place just has a sunny disposition.

Question: Is anyone bothered that the top of the Boojum Tree on the left has been cropped? 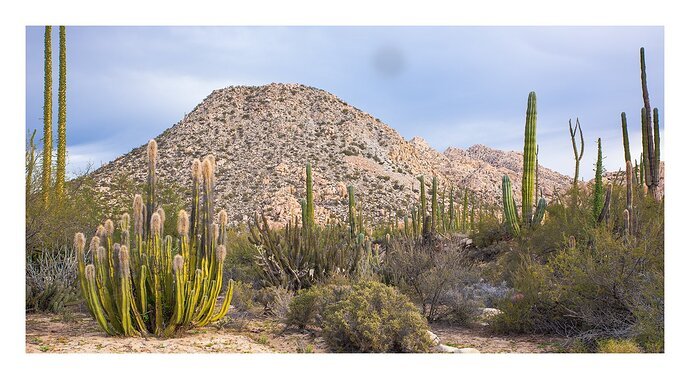 Igor, I love cacti as long as I can stay clear of them. Does the cut off bother me? I’d say yes. I first thought that cropping them out would work, but that would crowd the next cactus over, but should be an easy fix with cloning. And while your at it, there’s a large dark spot just above and to the right of the mountain.

I like this landscape image very much. You mention sunny - I guess more because of a feeling rather than light - since the light looks pretty diffused - which I’m really enjoying the light throughout.

Am I bother by the cut off verticals on the left? Maybe a little, but for me it’s offset by all the strong verticals on the right, and even including the shorter cacti throughout mid frame. Do I mind, not really. Would the image be better if the tops were visible (with the same crop/format)? yes.

Small suggestion to burn down the soil below the cacti in the LL. Big suggestion… what the heck is that flying gray orb in the clouds?

Big suggestion… what the heck is that flying gray orb in the clouds?

And while your at it, there’s a large dark spot just above and to the right of the mountain.

Lol. Good catch. I have no idea how that got there. The saved TIFF file didn’t have it but the active one in photoshop did, as did the TK sharpened one. I must’ve done something in advertantly. The only thing I tampered with after saving the file was to convert the image from the current adobe landscape profile to the D810 landscape profile in ACR but that was cancelled.

Regarding the cactus tops - I guess I can ‘shave’ off the tops. No, that won’t work. These are boojums that don’t have the simple round tops like the cardons. This would require a new reconstruction. I have my principles to consider (and skill). 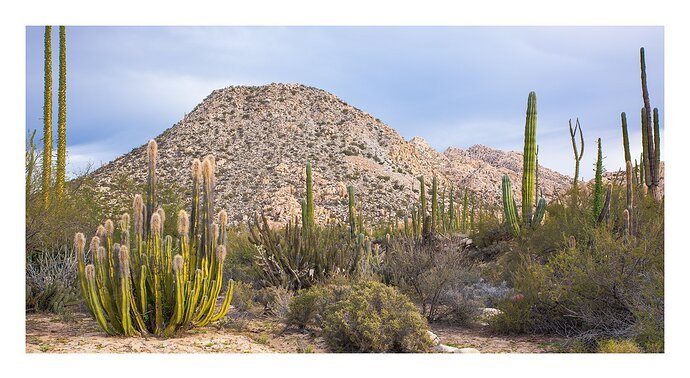 And while your at it, there’s a large dark spot just above and to the right of the mountain.

Igor, I saw that dark spot immediately. Looks like a cloud but is so circular in nature it might have been something else? Anyway, an easy fix if you’re inclined to change that spot.
The topped off cacti are another easy fix IMO. Although not a deal breaker as is it is worth another look with the area cloned in with sky.
Regardless of any thoughts for change, to me this was a ** truly wonderful desert scene.** I mean the array of vegetation along with the BG hill area is an excellent view…

Nice “desert garden” scene. The cutoff tops do bother me, but not an image killer either. Nice job pulling off a tough scene to compose.

Igor, the others have provided a few suggestions that I agree with so not much to add, except that I am enjoying this scene. The foreground lighting on the cacti is very nice and the variety of growth in this desert is quite interesting.

Igor, I like this shot and it is much better without the big glob in the sky. The composition works well and it is a very pleasant scene to view for me. I do wish the cacti on the left were not cut off but it is not a big deal for me in the overall scene.

You know, I’ve bee studying this for a few days now and I can’t rightly say whether the boojums going out of the frame makes any significant difference at all.

What a gorgeous desert scene. It has an uncanny refreshing feel about it … I suppose that is due to the wonderful light that you have captured. The wide presentation works very well here because the ground and the plants get more attention than the sky.

The two tall Boojum trees on the left looks fine as shown. There is so much to see and enjoy.