With this image I tried to show a more intimate side of the Boojum Trees that inhabit the Baja peninsula. This was shot a bit earlier in the day, which accounts for the color difference from the previous image. I actually shot this later at sunset as well but the shadows from the surrounding plants started to break up and destroy the composition. As in the previous image a considerable amount of time was spent aligning the various elements for a good composition. I also moved back and forth before deciding that I wanted these two front trunks to completely dominate in shape, brightness, and color. Please let me know how this can be improved. 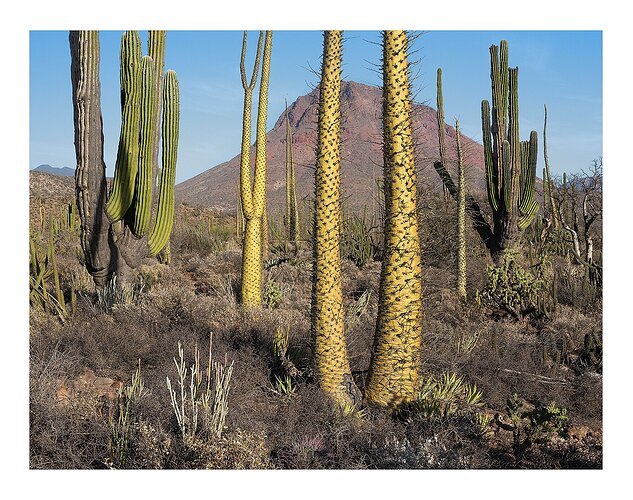 Rework based on Ed’s input: 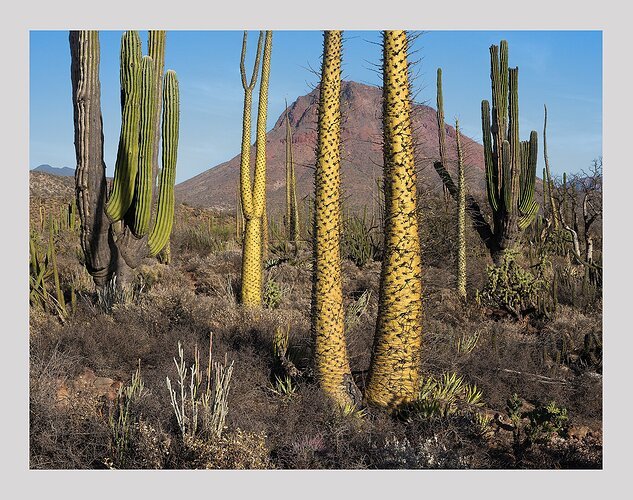 The first thing that comes to mind is strength. The major elements - the boojum trees as well as the flanking cacti - stand tall and solid. They have a presence that is different from everyday trees. The arrangement looks great with separation to show each one, but to create a visual whole as well. The mountain in the background supports the idea of strength and keeps them visually separate. You’ve got me intrigued about these trees as I’ve never heard of or seen them before. I don’t have advice as to how to improve except that the orange shades in the fg could be brought up a little without overwhelming the green shades - it would be a nice complement.

I think it’s overexposed. It was shot an hour before sunset with the sun at my back. This comes closer to what it looked like. 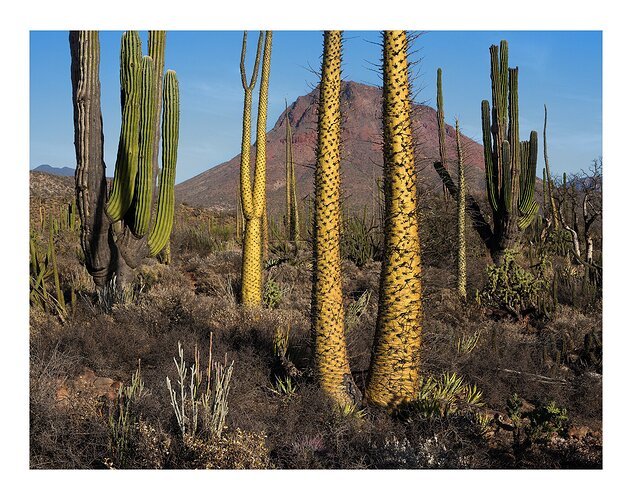 This is another very strong image of these photogenic trees. Both versions are fine, but I prefer the added warmth of the repost. I played with a scroll crop off the top but decided I liked your original with space provided above the large cactus on the right. I don’t see anything that I could add that would be an improvement.

Igor. as you said in your prior Boojum post, you really need to have interesting skies with these tall trees. It looks like you had a bluebird sky here, but I really like how you overcame that by switching to a horizontal, and using the mountain to dominate the background. I also don’t think you could have achieved any better arrangement of trees, you spent some time on this I’m sure. I actually like this image more than your prior post, the intimate view appeals to me, I feel more “connected” to the trees.

To my taste, I think the original post is very slightly over-exposed, but I think your rework drops the exposure a bit too much, especially the contrast added to the orange trees in the center. I’d suggest aiming for something about halfway in-between. My only other suggestion is a real nitpick, but I’d slightly burn the highlights in the two bright trees on the right edge.

Thank you Ed for commenting on this image. I agree with you that I went overboard when I dropped the exposure. I hate to admit it but the white border actually raised all the tones and made the image seem brighter than it actually. In PS where I work with a black background it looked right on. I should change that to midtown grey in the future. Also, sharpening seemed to introduce light tones in the darker areas, which also changed the outlook. I thought it was over sharpened anyway. I dropped the sharp level.

Now about the image itself. Initially I thought this was a better image. The composition is richer, more complex, more interesting, and you can spend a lot of time on this one. However the other one has a more subtle beauty. I think @Kris_Smith really nailed it when she said this was all about power and strength. I wasn’t aware of that when I put it together but she is so right. The previous one is more spiritual, beautiful, and graceful. Even though it’s not as complicated I think it’s more enduring. I haven’t printed either yet. The proof of the pudding is in the eating.

What a terrific composition. I can tell that you spent plenty of time moving around the scene to get this just where all elements line up without overlapping. I really like the second Boojum tree and how it branches out into 2 and then 3 trunks and is very elegant. It provides a juxtaposition against the two main Boojum trees in the foreground that are very powerful looking and explode through the top of the frame. Power next to elegance. The 2 saguaros provide nice framing. I think your original post on this just needed a slight bump in contrast. I agree that your rework was too dark and went too far but based on your black background that’s to be expected. I used to have a black background in LR and PS but mid tone grey works really well for me now. Your last rework at the bottom of this post is dead on. The colors, tones and lighting all look great and about right.
Your last image and this image are very similar but also very different. This one is very masculine and imposing but at the same time graced with elegant Boojum trees in the background to balance the power out. The dead tree on the right of the scene also says that this is the desert and that things are harsh here. Your last image is more seductive, soft, and inviting and I prefer it to this image but just barely. Two really fine desert scapes with incredibly interesting and beautiful Boojum trees that I didn’t know existed. Even more interesting than Saguaro which had always been one of my favorites.

Thank you David for your thoughtful comments. Yes this image does have sexual overtones, particularly with the male organ. I think that’s what you were implying.

Baja actually has a ‘cardon cactus’ which looks like the saguaro cactus of the Sonoran desert but is a different species. Personally I find the Saguaro more shapely and elegant. The Cardons can be massive, sometimes with 20+ branches. Frankly I don’t know how the 2 species evolved. There is no physical separation that would allow for speciation.

Thank you for your comments. Although this image did not get a lot of comments they were of high quality and I learned from them about my own image.

I enjoy seeing and photographing unusual things, and these are pretty neat trees. Thanks for sharing this image with us.