I photographed these Cape Sugarbirds on our South Africa tour last year. There were a lot of them at the feeders at one of our lodges in the Cape, I placed a feeder below a perch and these guys had a tussle in the air over who would get to use the feeder. 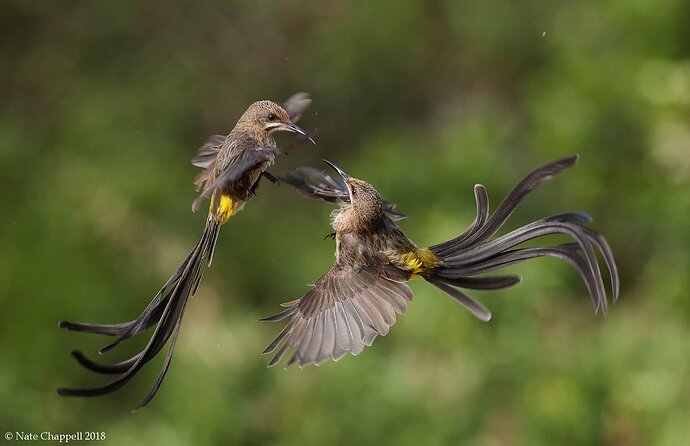 Great action! And you stopped it well.

That is awesome action, Nate. I keep seeing the local birds do this sort of thing, but I’m never quick enough to get on them. Those extravagant tails add a great deal to the image. Their curves make great graphic lines.

Nate, your timing really nailed the action on these two. It would be really cool to see slow motion footage of such a sparring contest.

Great action capture Nate. Sharp eyes and heads on both and the interaction is terrific.

Looks and sounds like you intentionally caused a bird fight to take a picture.
In the U.S., state and federal law speaks to this behavior, in a animal rights and animal cruelty context. It is part of the reason cockfighting is illegal.
What is the value of angry bird pictures?

No I didn’t intentionally cause a bird fight. Birds have quarrels at feeders quite often, the more birds that are around the more types of these interactions you will observe. Have you ever observed hummingbird feeders where there are a lot of hummingbirds? There are a lot of fights. At this location there were a lot of sugarbirds so there was a lot of competition for food. I simply photographed what was already going on at the lodge. There were feeders already placed under other perches that the birds would quarrel over.

I don’t like to make direct comments toward other commenters, but this time I will make an exception and chime in.

Hey, @stevenm, I would suggest that, if you object to bird lovers who have feeders and take photographs, you may want to voice opinions like this elsewhere. Maybe there’s some animal rights forum that will listen, but you might consider that this site is about the art of photography. And you should choose to direct your comments as such. A comment like yours, having nothing to do with the photograph, and does not belong in a critique forum.

Very, very nice shot. The birds are ‘placed’ perfectly in the frame. Great species, endemic to that area. Seen many of them while cycling through the Western Cape. Anyway, first rate shot ! Cheers, Hans

Impressive detail and stop action especially when considering that you did this handheld with your 500. My experiences it’s real difficult to be successful with smaller birds engaging in claw to claw combat. The bird on the left looks really angry and I find that fascinating. With respect to the behavior and several comments, I have found this type of activity occurs with many species regardless of whether there are feeders present or not. I have pictures of goldfinches, chickadees, and bald eagles doing this. I have personally observed herons engaged in this kind of behavior.

Nice battle shot. You did a great job of getting all the important areas nice and sharp.

Thanks David, actually I was on the tripod for this one.