I caught this Red-tailed Hawk just as he launched from a tree in my yard. His yellow eye indicates he is a juvenile bird.

What technical feedback would you like if any? Any and all

What artistic feedback would you like if any? Any and all 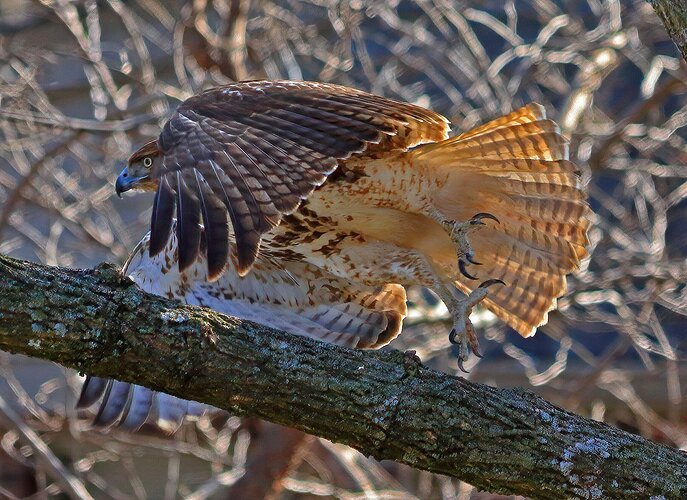 In a perfect world this would’ve been an absolute prize to my eye if only that big oak branch were not there, and there was a bit more room on the left. Very cool stance of one of my favorite birds. I really get it that the birds can be pretty uncooperative, and we have to work around things getting in the way of a shot. It is STILL a cool shot, I say,

Thanks, Dave! I kinda like it that the limb is there, though I suspect the majority of folks who view this photo feel as you do, Anyway, it is a magnificent bird!

A very nice capture of this hawk, Terry! Detail and colors are very good, especially considering the back-lighting! Your title says it all and it’s quite obvious that the hawk is just leaving the perch. With that in mind the branch is part of the context of the scene/event so it’s quite appropriate in my opinion. The background of branches is quite busy but it doesn’t really bother me because it’s random yet consistent (in fact it looks like a giant spiderweb) so it doesn’t conflict too much with the lines and shapes of the bird. The bottom line is that the bird clearly stands out (especially in the large version). The only suggestion I would have is to keep the same relative dimensions but crop a little from the right and bottom to move the bird a little closer to the right side and thus entering the frame as opposed to almost leaving it.

Thanks for your thorough critique of my photo, Gary! I’m glad you like it. You hit on the one thing I’m not crazy about, and that’s the background. I tried several different shadings to try to eliminate some of that, but nothing looked right to me. That busy background is one reason why I don’t mind that solid limb in the photo. I will play with the cropping a bit and see how it looks. Good suggestion.

Very cool, Terry. Great reflexes to catch this. I love the backlighting of the hawk, particularly the wing and tail. As Gary noted, that web of branches is random enough that it really doesn’t bother me (aided by the fact that the hawk is so large in the frame). I also like his suggestion of taking a bit off the right to give the impression of more room on the left.

Thanks, Dennis. I, too loved the backlighting - particularly in the tail. I did crop it some, mainly to fill the frame with the bird and show less of the background, but I’ll play with the crop a bit. Thanks for taking the time to offer your insights and opnions.

Terry: If you have extra territory available on the left, I’d add some back. The bird is exerting so much energy in that direction that you don’t want it crashing into the edge of the frame.