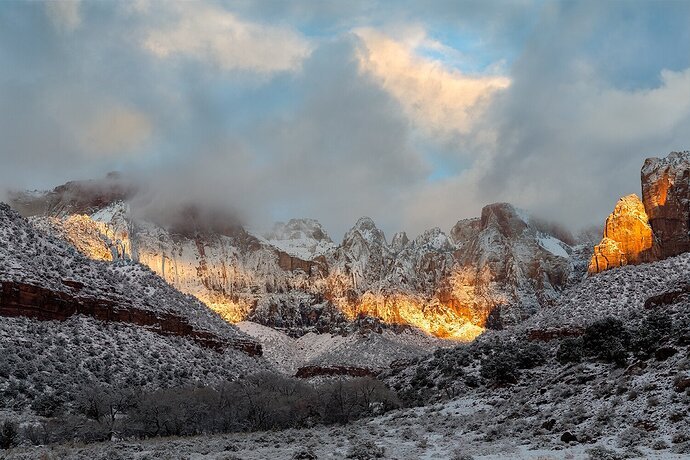 I have travelled to Zion many times for autumn color, but only once in the winter and have never been there for a snowstorm. Last Saturday I saw that a snow storm would arrive there on Tuesday, and because I have been so stir crazy and bored, I decided to fly the next day to Las Vegas (from my home in San Francisco), rent a car, and drive to Zion. I arrived Sunday evening. Monday was a grey out, as was Tuesday morning. The snow began Tuesday afternoon and continued off and on until Wednesday evening. Thursday morning at sunrise the snowstorm was mostly cleared, but I managed to get this shot at this iconic spot. The rest of the morning there was a mix of white clouds and blue sky. Friday morning was blue sky with more new snow. So I managed to get two great photo days, one with clouds, and one with blue sky, both with new snow. It was amazing how fast the snow disappeared after the clouds were gone and the sun was shining. It was a crazy exhausting spur of the moment trip but I was glad I did it.

As usual, any and all comments are welcome. Especially the crop and the color balance (which I worked on endlessly; the raw was very blue…)

I’ve never been to Zion but I think you’ve caught the grandness of the spectacle quite well. I can almost sense what the comments will be about. How much should the warm light on the right be saturated. It’s a personal choice in my opinion.

Tony,
The sky has loads of drama with the clouds and the warm light on the rock formations is sublime. Obviously the snow is a big plus for this desert landscape. It appears that you had some wonderful shooting conditions. No suggestions from me.

Tony, I came very close to making the same trip but had last minute things I had to attend to. You are correct about how quickly the snow disappears in the valley of Zion at the lower elevations. You can almost watch it melt. You certainly got some magical conditions and light. This is a really beautiful scene for sure. The right side of the scene with bright orange walls really tugs my eye and the left side of the scene is rather bland in comparison so the scene appears to be right side heavy but not necessarily in bad way. I’m just wondering if you could crop off a fifth or a sixth of the left side to make it better balanced or tone down the right side glow just a little bit. Tremendous scene Tony.

Tony, for Zion in winter, it doesn’t get much better than this, it sounds like a spur of the moment trip that paid off big time. The light and snow on the towers are awesome, bu those clouds add a lot mood and energy to this image as well. I’ve been lucky enough to see snow at Zion a couple times, and it does melt off fast (unless you go up thru the tunnel to the east side, I hope you did that too).

I actually think the composition is well balanced as it relates to the shapes of the towers, it is a classic scene after all, when here in these conditions you just gotta do it (and hopefully lots of other comps too). I always found the foreground sage and trees to be the tricky part to this scene, good call on your part to minimize it here.

If I was going to suggest anything it would be to try to balance the luminosity / saturation of the alpenglow, dialing back the right side to bring it more in line with the center. The red channel might be slightly clipped in these areas, you could try pullinghtat back a bit.

The drama in the sky and warm alpenglow on the mountain is wonderful. No nits from me.