Just been thinking about my use of cloning or content aware fill with my nature images. My current thinking is that for my landscape work I use it very sparingly usually for spot removal in sky or water. Occasionally to remove something such as a small branch sticking in the scene. However I tend to do a bit more with my wildlife images especially around unwanted branches in a scene. My thinking is that these are wild animals and I try to capture them without disturbing them. What are peoples thoughts on this subject. Here is an before/after example of a Tufted titmouse where I removed a few branches from the bottom of the image. 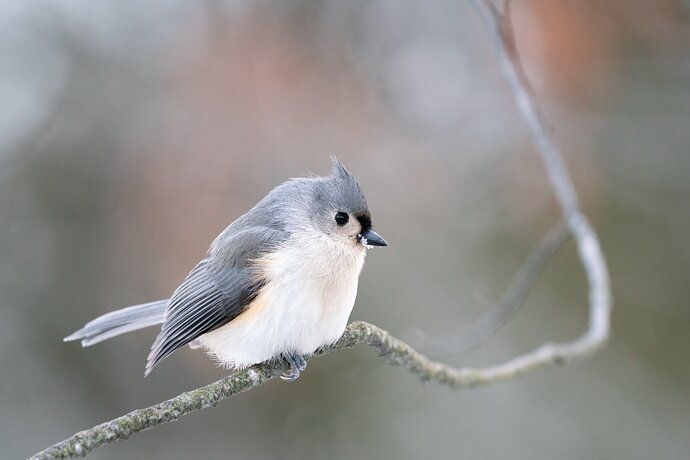 I too try to limit my cloning in landscapes to dust spots and the occasional stray item.

For birds especially, I do find myself using the clone/heal more frequently. Since my work is predominantly for myself, I have no problem with it.

In this instance, Bryan, the cloning yields a much stronger picture, it works nicely.

My goal for my personal images is art, and I’m happy to use the tools I have to achieve that result. My taste is for a natural look, rather than a “filtered” look, but I have no problem removing branches as in Bryan’s example. It’s a gorgeous image with a stunningly beautiful BG – why leave items that detract from it artistically when they can be removed. As to landscapes, I wouldn’t want to alter an icon but I have no problem picking up distracting stray elements or pruning stray branches of the sort that I might have done if I could have walked into the scene before shooting.

The Content Aware Edit Fill is a godsend. I no longer have to worry about telephone lines in my compositions as I did during the film days. Now I shoot with the intent of removing objects as I’m shooting. It’s one of the best editing tools in PS and they have really improved it over the years. I no longer use the clone stamp tool.

I don’t see much difference in removing a stray piece of grass or a dying leaf, or temporarily bending back a twig (not breaking it) when taking a photo of, say, a flower, before I shoot. Our processing tools do the same -but after the fact, in a harmless way. And I often see something later which has to go though I didn’t even notice it when taking the shot. If only the birds wouldn’t hide behind twigs!

Oh what a cutie! Cloning the branches was definitely the way to go here. You want eyes on that little face and nowhere else. This is how Audubon might have portrayed this bird, albeit probably with a few more in the frame and all doing different things.

My way of thinking about it is this - now that photography has advanced to the point where digital manipulation is easy and accessible, it is a legitimate part of the tool set. How and when you use it is up to you, but my big question is - if I was a painter, would I leave it in? Painters have always had the option to alter, omit and outright change everything in their pieces. A painting can come entirely from imagination and have absolutely no basis in reality. Nobody minds or calls foul. Photographers, not so much and it was that very reliance on having to be on the spot with a piece of equipment that, early on, relegated them to non-artist status; mere technicians. After all, isn’t it all about the camera? Lol.

Modern photography allows us the same freedom painters have always had - to interpret and hone a statement; to show only what she wants to be shown. The tools are different, but the concept is the same - to allow an artistic vision full flight. Some freedom from the strictures of film and limited processing scope…

Is there a place for reality left in modern photography? Of course, it’s up to each of us to determine where that is for our own practice. Both in the edit and in the discourse - if a photo is heavily altered, I say that it is. If something I shoot needs to be more documentarian in approach for it to work, I leave it that way. If not, I edit the best I can to fulfill my idea of the finished product.

The idea that a photograph is a slice of the real world will always be the approach people have when first seeing one. I don’t think that will change for a long time, it’s inextricably linked to the roots of photography which most people remember. Digital photography and all the tech has been saddled with suspicion. People now wonder “was this Photoshopped?” with the idea that it’s somehow cheating. Just think about the phrase photo manipulation. Manipulation. That’s got some negative constructs now doesn’t it? A double standard and it’s really unfair unless you’re a news photographer. I won’t even go down that rathole.

I recently had a conversation with a friend about how she thought that her daughter was a more pure artist than I am as a photographer. After listening and digesting what she said, I basically replied with what I wrote above. That I have different tools - software and a camera - but that my ideas and concepts for my art are the same. I still have to bring them to life somehow and that takes skill, vision and creativity. She got it. I showed her some of my photos and explained some of the process and she was amazed at how much went into it. Not just pretty snaps with a ‘nice camera’.

Well that was super long-winded. Ha!

Wonderfully put Kris. I am constantly trying to explain my photography as art.

Thanks @glennie - I didn’t realize how long a reply it was, but as you might deduce, I’m pretty passionate about this subject. The tools we have these days are amazing and I’m only scratching the surface of what can be done. The better I get in the field with composition, lighting and subject matter has to keep pace with my ability to process those photos to extend that vision and complete the process.

Thank you to all the replies in this discussion. I’m just trying to work out in my own head where I want to be using these increasingly powerful tools. It’s not that important whether which tools you use and how far you take your edits but I think it is important to have your own understanding of what you due. As well it maybe worthwhile considering how we communicate this information to people viewing our photos.

To some degree I think it’s a slippery slope but I think what you’ve done here is pretty modest in terms of manipulation. Subtracting mountains or a lake from a landscape changes what the scene represents but a stray branch doesn’t really change what the image represents in my opinion.

Excellent comment Kris, I agree completely. My response is shorter and less eloquent than yours but says the same thing. I usually ask, do you believe photography can be an art form? The answer is always yes, so then I say, "OK what does reality have to do with art?
BOOM!..got’em in a head lock.