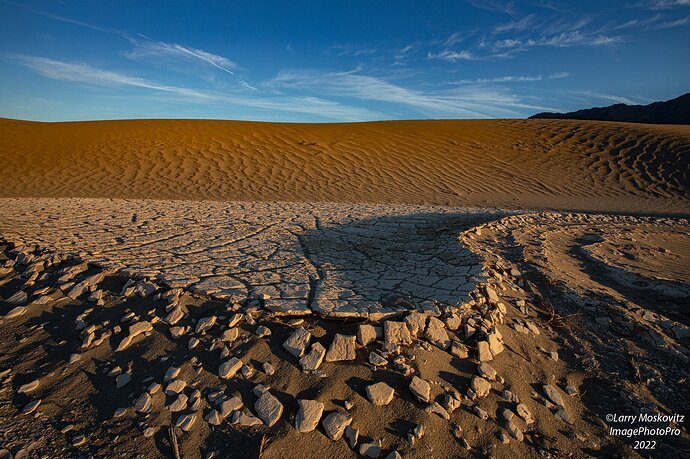 The Old Seabed in the Dunes which is below the dunes and exposed taken at near Sunset. I also did a variation in monochrome earlier posted. Mostly I was interested in the contrast of textures, colors, and lines.

Larry, there is so much going on in this image. The different tones of brown, the various textures, and the differing directions of each section make for a very interesting photo. I looked at your similar B+W image and prefer the color. I think the browns really add to the image. My only nit may be that the sand in the upper half of the image is a tad bright, but maybe not. Great pic!

This is rad! I love when a photo tells a story along with its beauty. Great composition too. My only suggestion would be to try increasing the luminance in the yellows and oranges to make them stand out against the rich blues in the sky.

Hey Larry! I like all the different elements at play here, and I think you accurately recognized a photo was lying in wait at this location.

My concern with the composition is that it feels a bit disjointed, right-heavy, and busy (partly due to the direct light casting shadows). I almost feel like there’s a photo waiting just to the right of this frame - like that curve of the playa leads me right over there, and I wish I could see more in that direction. Everything to the left of the big shadow cast by that curve feels a bit extraneous - relatively empty and lacking energy to the forms and lines, unlike the right side which is packed with lots of interest. The big shadow also kind of “disconnects” the left and right sides, making the whole thing feel less cohesive.

I do understand that you wanted to capture that curve of the playa, though. That may be a great subject in and of itself (perhaps with some other elements excluded), but it seems to me it would work better in soft light without that large shadow detracting from its shape.

I’ve included a sample crop to demonstrate that the right side on its own could feel a lot more cohesive. But I do like the use of a horizontal frame here, I just wish I could see more of that path off to the right, as well as the mountain which feels like it’s just “beginning” over there. 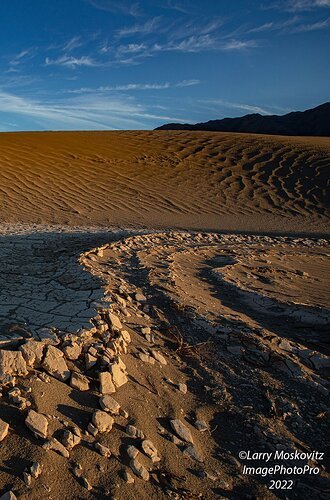 That’s a fascinating subject, and I agree the contrasts are wonderful. I agree with David there is a lot going on, that’s good, but also with Alex that the composition doesn’t “flow the eye.” I’m less concerned about the shadows, but the left 2/3s of the image is more of a layered effect, and then you hit that curve for a much more leading-line effect. My preference would be a composition that ran with one or the other, to let the eye flow more naturally over the subject, as opposed to both. Alex’s crop does a good job of isolating that leading-line effect.