Deep In The Shadow 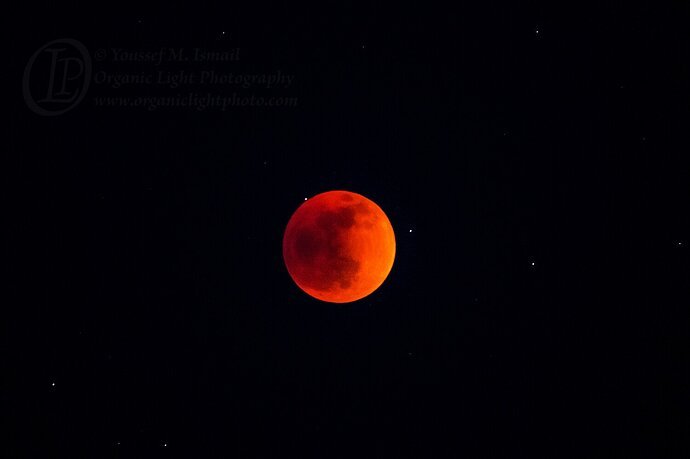 This is the Super Flower Blood Moon of May 15th, 2022. This image was taken at 9:11 pm at peak eclipse when the moon was deepest in the shadow of the Earth. I was waiting patiently for star HIP 76106 (upper left side of the Moon) to come out of occultation from behind the Moon. Star HIP 76033 A is on the right side of the Moon. I thought it was an interesting arrangement.

I hesitated posting it as I felt others captured the eclipse in more interesting ways.

Just wondering if you think having star HIP 76106 as close as it is to the Moon is distracting or interesting?

It was a single exposure on a Nikon D850 with a Nikon 400mm f/5.6 telephoto lens wide open at f5.6 for 0.5 seconds at ISO 6400, in DX mode for an equivalent 600mm focal length. I was not happy with the high ISO but I needed to keep the exposure time under 1 second to minimize streaking, which I think was avoided.

Youssef, I like this image just as it’s presented. The stars don’t bother me at all and nicely frame the moon. Looks like you managed to deal with the noise nicely too. This is one of those types of images where the subject should be centered in the frame as you’ve done. Awesome image.

Terrific image Youssef. I don’t mind that there is no foreground in this at all. I like the color and the overall brightness you achieved with this image. I find it interesting that there are three stars almost perfectly lined up around the moon. It’s slightly distracting but also really interesting at the same time however, it may take something away from the main subject. Maybe. Not sure. I also find the one star on top of the moon to be slightly distracting but there is a story to tell there as well, particularly for someone like yourself who appears to know a lot about the stars. So in that regard, I think it definitely tells a story you want told. I’m also not sure about the moon being centered. It feels slightly static to me. Again, I’m not sure, but I feel this would come off with more vitality if you had the moon coming out of the LLC third. Just my two cents on a really terrific image and I’m glad you decided to post this.

I like this a lot Youssef - the rich red color, your composition, and the black sky. I like how you feature just the blood red moon. Star HIP 76106 is not distracting and does add some interest to the black sky.

I think the next frame would be better with a bit more separation but this is a nice frame with the lens you used.
Could be sharper and more detail with modern lens.

Thanks @Dan_Kearl. Yeah, its not a modern lens. Its a Nikon 400mm f/5.6 AIS lens. I have used it for over 20 years way back when I still used my Nikon F4s camera body. I think the lack of sharpness is coming from the high ISO. I take monthly photos of the new crescent moon with this lens. Here is an example of its sharpness from my latest crescent. 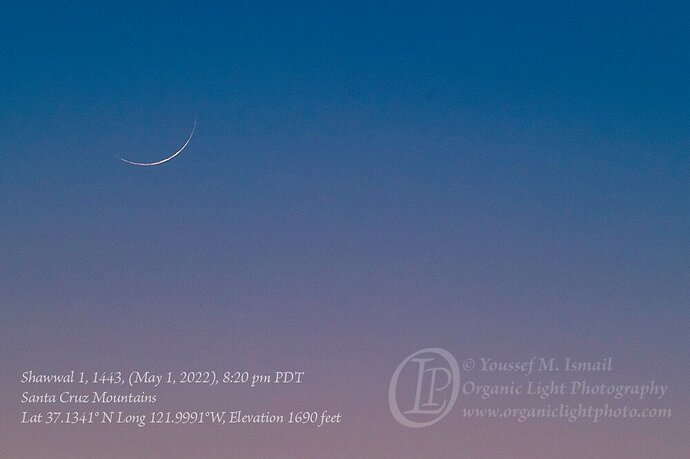 This is a terrific capture of the eclipse. I actually like the tension created with the star so close to the edge (the number/name of the star means nothing to me as I’m not a student of the night sky…)

I like the stark color contrast with the blood moon against the pitch-black night sky. I would agree that the moon is a bit soft. But again, I don’t have great experience here - and I can vouch that I’ve had very limited success over the years with photographing an eclipse.

Great job with the single-image capture of the eclipse.

The moon is so orange that I relate it to … well… an orange. The other association I make with it is that flag of Japan, but I think that’s more to do with the position of it and the aspect ratio of the image. I like all that black around it. It has a sense of wonder and mystery that the cosmos has. Having it central works for me because just as the Japanese flag is not static, neither is this. A radially symmetrical object has visual energy because it all flows from the center. Regarding the stars - they’re so small that they are insignificant. I tried I tighter crop to raise their significance but then you don’t have all that blackness and much of the power comes from the relative size of an orange ball in the center of black (much like the Japanese flag, which is one of the best in the world). So I would remove the stars probably. But some astronomy type of people might find some value in the white specks. So from an artistic point of view - no stars; from a narrative point of view - keep stars.

Youssef, this looks very good with its scattered nice clean stars. I like the star just peeking out from behind the moon. The moon’s edge looks nicely sharp, so I’m thinking that its apparent softness is from noise. I do see good detail, with the big crater and the lines coming out from it in the lower right showing very well.