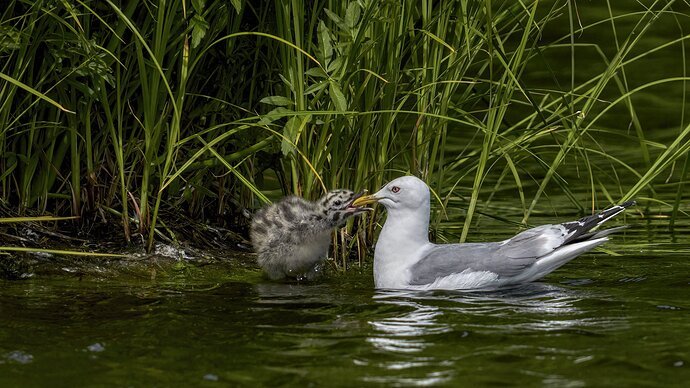 A Mew Gull hen and one of her two chicks. Obviously the chick was demanding to be fed but its mother wasn’t cooperating. They tried to get their father to feed them also but neither parent was offering anything.

Any feedback is appreciated.

Gary, this is a nice action catch with the chick’s wide open mouth. The environment looks good also. Interesting that the young chick is on land, do they hide in the grasses/reeds until they’re older?

So cool, Gary. I have never seen a gull feeding her young. In fact, I don’t think I have ever seen a young gull before. So this is a real treat.

A great behavioral image, Gary. The begging chick is perfect.

Superb job! I love it when you’re able to catch behavior like this. Excellent detail and setting.

Excellent detail. I like the environmental nature of the scene and it definitely tells a story. I could, perhaps, see a slight crop from the left. I’m curious how you know this is the female? None of my guide books differentiates between the sexes.

I’m curious how you know this is the female? None of my guide books differentiates between the sexes.

Thanks, Allen. I observed this family of gulls for quite some time and based my call on their behavior. This one frequently went back to the nest even though the chicks weren’t there any nore and also stuck close to the chicks at all times. The other adult never went to the nest while I was there and was more distant. It spent most of its time in the trees and a nearby powerline and only occasionally came down and visited the chicks. I have some photos of the chicks trying to get food from the male adult also but it wasn’t offering any help either.

Always a treat to shoot behavior like this. Nice vegetation as well throughout the image. Nice work! Hans