I typically don’t make a traditional Christmas card, but use it for the typical annual highlights, so I used this last year as a highlight from my Greenland trip. This was a photo workshop, so this is a setup with two sailboats and playing with perspective with the arch in this iceberg. I apologize if the human element here is too much.

This was taken from a floating sailboat right around or just after sunset, taking another slowly moving boat. This is a fairly heavy crop because I was limited by my lens tech - both zoom and aperture given the low light. 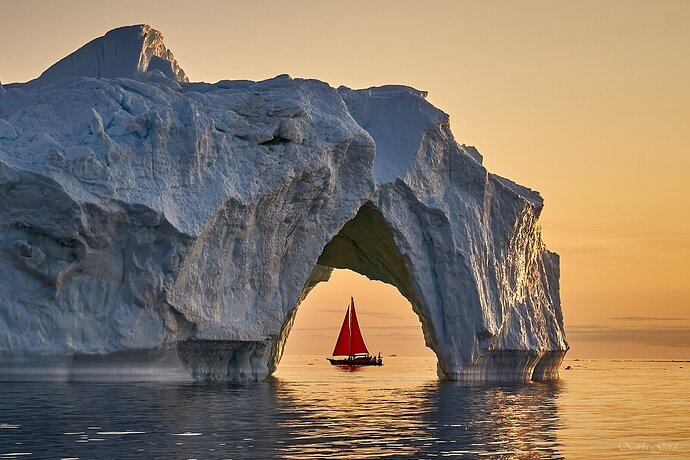 I struggle with the crop on this. I posted the uncropped version below, just to show the options. Other than that, I’m just working on trying to bring out the best of the iceberg and the sunset without making any horrible editing errors or making it over the top - hopefully.

I actually am considering this as one of an iceberg collage for my wall. Any tips that would help with this showing correctly in print would be great too.

Is this a composite: No
The processing on this continues to be a work in progress. This is the one I have been most satisfied with so far, but seems to show in varying colors (sky) depending on the image viewer. Other than the crop, I lifted shadows and brought down highlights somewhat significantly, did a levels adjustment and a very slight amount of saturation and structure/clarity (Capture One version). it looks like I also adjusted the white balance.

Here is the uncropped version of this particular edit variant. 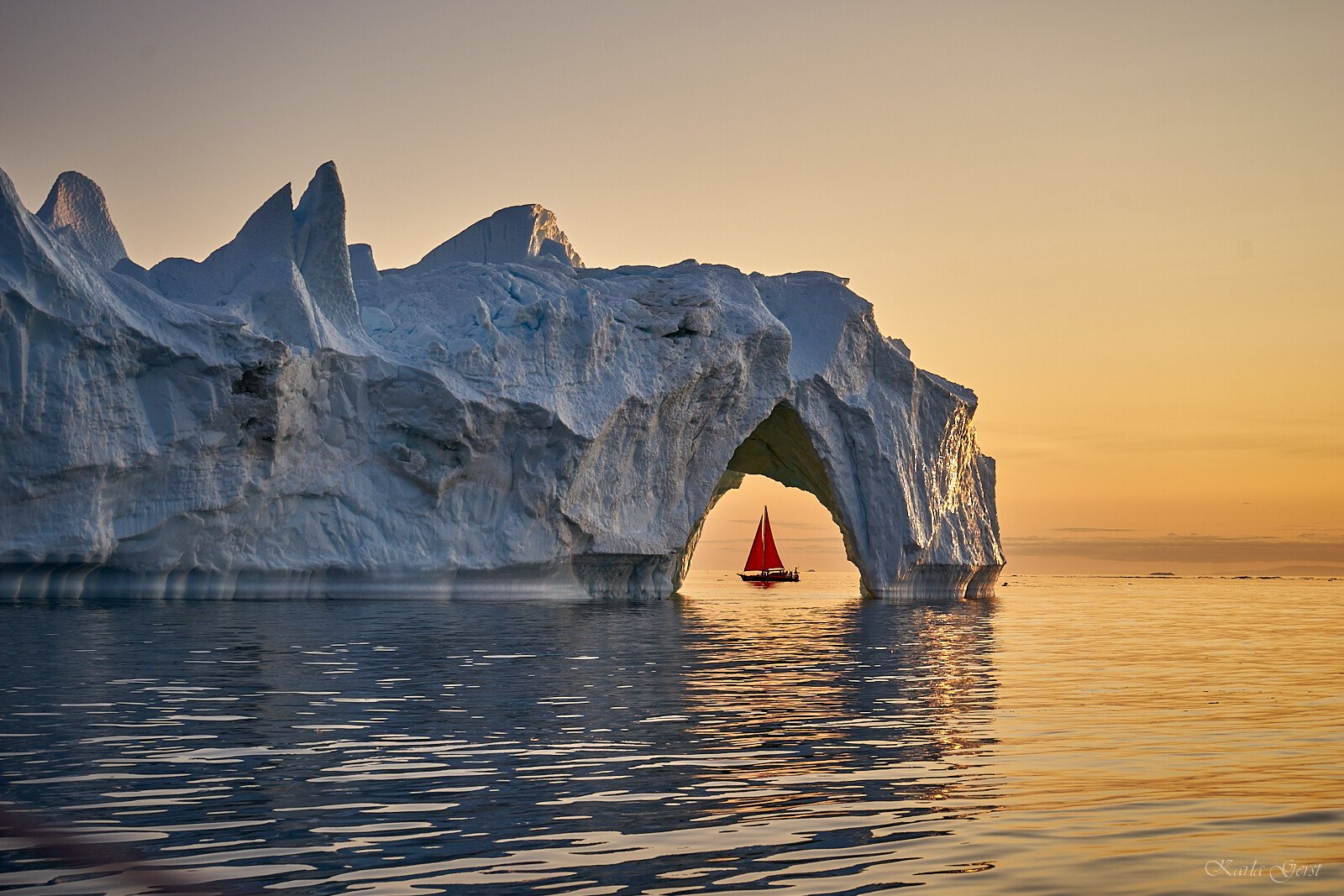 Wonderful image and the sail boat arriving at just the right moment is a huge plus… setup or not. I found the iceberg looking more like a rock formation so I did a quick and dirty crop of the second image into a pano format, isolated the iceberg with the quick selection tool which allowed me to change its color without changing the color of the sunset. Just a different take.
.

@Patricia_Brundage - Thanks for sharing your interpretation. It is definitely more artistic than mine. Maybe I will play around with the color or lifting it a little more. I always find it challenging to retain the “night” feel but get a nice exposure. I did consider a pano crop. Maybe I’ll do some modification along that line, but still come in a bit closer Thanks again for sharing your view!

Karla, wonderful photo and I like your thought processes and versions. Seems as though there could be a lot of interpretations. I do like the version @Patricia_Brundage has posted. So yes, you’ve got a great image with lots of possibilities.

Karla, your initial post looks very good. I think the crop works well with a good mix of sailboat, iceberg and sunset colors. I did think it was a rock formation until I read your description. Reducing the blue in the iceberg might turn it back into ice…

. Patricia’s, pano crop also works well and her iceberg has more of an ice feeling, but still feels a lot like a rock formation. While you may not be able to avoid that under these lighting conditions, it really doesn’t detract from the image.

@linda_mellor and @Mark_Seaver - Thanks to both of you for your comments as well.

I am curious. Can you put into words what you think would make this look less like a rock and more like an iceberg? I am interpreting from the comments that color is part of it, but I don’t feel like that’s all of it - or is it?

Karla, the short answer is that I too think that color plays a big role in interpreting the scene. In so many iceberg/glacier shots there’s a strong inner blue glow that sunlight through the ice creates. Since you don’t have that strong white sunlight, it’s not clear to me how you might get that inner glow. There are hints of that here, especially on the left in your original post. I just went back to my pics of a South American Glacier and they are all strongly blue, under an overcast sky, so so maybe it’s more blue that’s needed. This is a strong image even if you don’t realize that it’s an iceberg, so the issue really becomes what story do you want this picture to tell.

Here’s a “bluer” version where I added a saturation layer, increased the blue and cyan saturation, lightened both and applied it through a mask to only the berg… Does it say iceberg better… 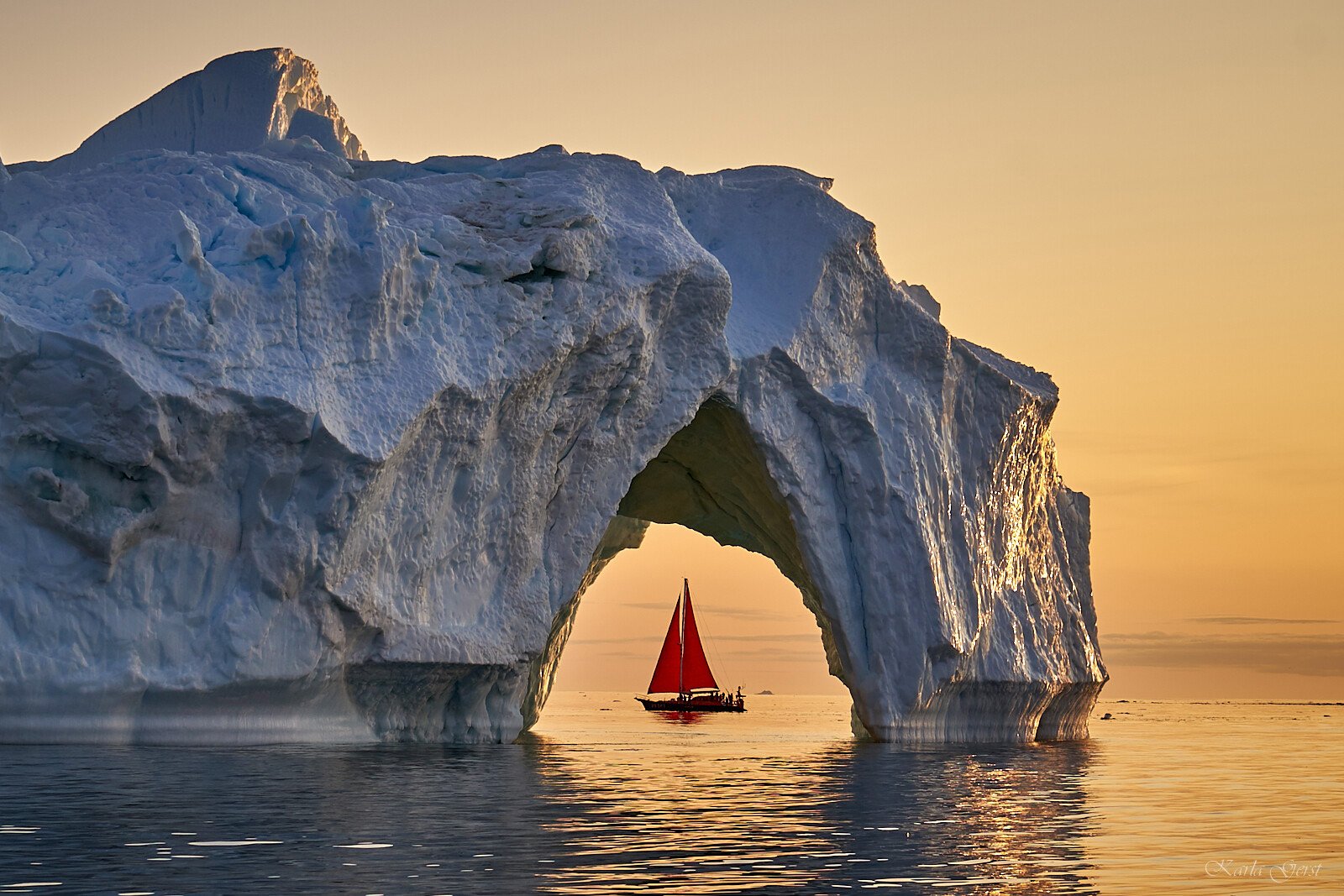 Karla. It is a gorgeous picture so I wouldn’t worry that the viewer sees it as a rock formation. The only reason I knew was because of your intro stating that it was an iceberg. You were there and if this was the color of the iceberg then let it be. Very strong and powerful scene.

@Mark_Seaver, @Patricia_Brundage - Thanks for the additional comments. Since I was there and knew it was ice, it was harder for me to see past that. For someone who saw it first as a rock, I wondered what would make it seem more Ike ice.

I can see where a more blue and white look might help. It’s true it was completely in the shadow which makes that light more difficult, but I am encouraged to play with it a bit more. Thanks for taking time to comment and make adjustments!

Karla, I tried again to make it look more like ice. Since I’ve never seen an iceberg forgive and/or ignore if it is not what you are wishing for. Used the quick selection tool and isolated the iceberg from the sky/water; in PS set brightness at plus 71 and contrast at -50., adjusted levels and then played around with the hue/saturation slider. Also took it into NIK Color Efex and added detail. 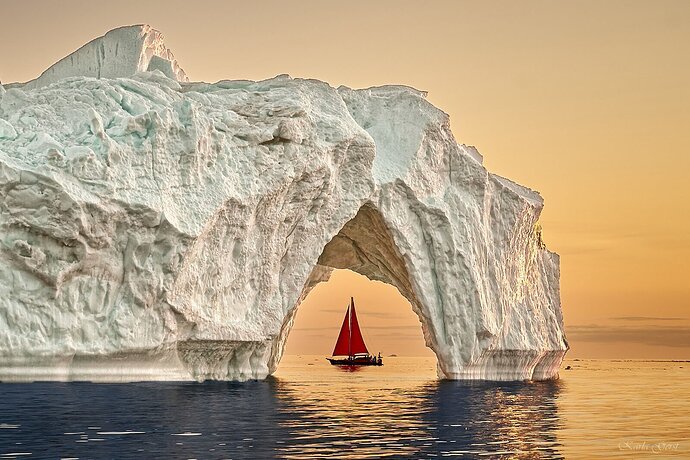 Either Patrice or Mark’s are very nice, personal preference.
Spectacular photo, if it were mine I would remove some of the larger wave highlights in the FG, the longest ones draw the eye, maybe remove all the wave highlights…

@Patricia_Brundage, @Dan_Kearl - Thanks for the additional comments on what you have done and what is distracting to you. As for what the ice actually looks like, I’m definitely not an expert but I would say that the light has a big impact from color of the sky, the water, golden hour, etc. since overall it’s mostly compressed snow and water.

I would probably go with a bit more blue, personally, but I think it depends on if it’s a matter of the best image, personal preference, or memory of the scene maybe. I will try some additional processing and not be afraid to push it more than I am used to. I am definitely still learning, and it is a bit like me trying to draw something. I can imagine a nice portrait and end up with a stick figure as the outcome when I have a pencil in hand.