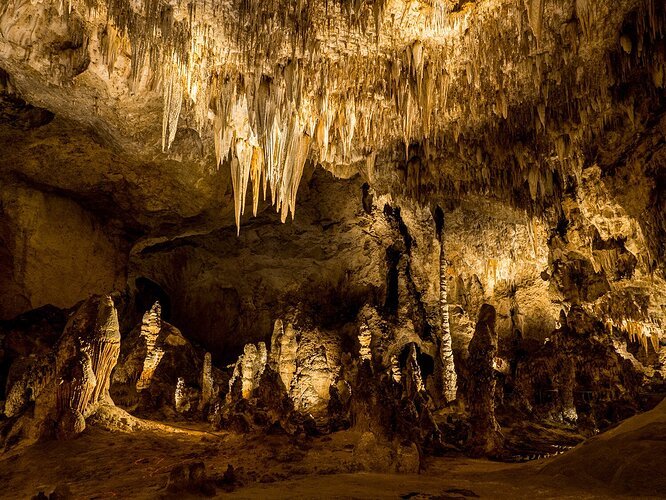 Part of the Big Room at Carlsbad Caverns. It’s more immense than you can imagine, but I did try to shoot it well. Luckily if you do a self-guided tour, you can bring a tripod. At least you could in 2016. Still, leaving the ISO too low means VERY long shutter speeds (this shot is 3 1/2 seconds), so I used a higher ISO and kept the f-stop in the middle of the lens for the most part. Otherwise I think I’d still be down there!

Obviously the lighting is the biggest issue. It’s dim with bright spotlights and other fixtures arranged to show off the various features of the limestone formations. I ended up underexposing most of the time to keep from really clipping the highs, but it was almost impossible to do. Plus underexposing too much would have introduced more noise which would be a problem considering how many of the caves and grottos are under-lit. White balance was also a challenge. In post I changed colors and temperature to reflect what I remembered of the color. Crazy, but I think I managed a few shots, like this one, that are ok. It’s out of the way, but if you have a chance to go it is worth it.

Is this a composite: No
Tripod 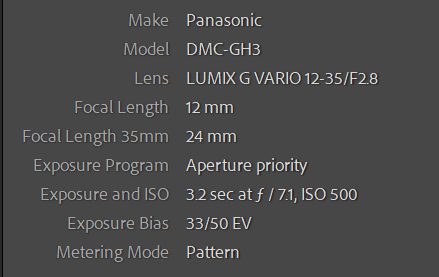 Lr for RAW processing and a crap ton of work managing the wide tonal range. Lots of dodging and burning. Lens correction and transform as well. Some sharpening & noise reduction. Photoshop to remove a couple of bright lights and used Frequency Separation to paint color onto an area that was too bright and focused too much attention.

Amazing and spooky – looks like an Indiana Jones set! I can imaging the tonal range nightmares, and it looks like you handled them very well, along with the wide angle.

Thanks, @Diane_Miller - it was a little eerie down there, but I LOVE caves so it was really fascinating. If tripods weren’t allowed it would have been much harder to photograph so I’m glad I checked ahead of time and brought it. I don’t have a linear profile for the GH3 so I started with another - Adobe standard maybe and worked from there.

Hi Kris, wow, sounds like you put some time in on this shot, before and after, but the end result is pretty remarkable. I shudder to think of all the tonal challenges you had to fix and surprised you were able to keep ISO relatively low at 500. A nice mix of highlights and shadows to make you believe you’re really underground.

Thanks @Jim_Lockhart - it’s a truly jaw- dropping place to see. The tripod was the key to keeping the ISO where it was.