Inside a Cave Looking Out 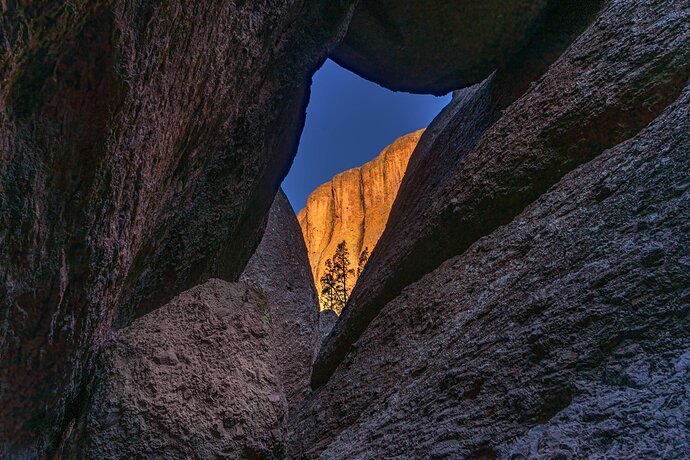 I hope this is not stretching the theme of the natural tunnel challenge, but I was inside a tunnel (talus) -cave looking through a tunnel-like window to an amazing sunrise reflected on the giant volcanic wall beyond. It was off season and dark when I entered Pinnacles National Park; I basically had the place to myself which allowed me to set up a small tripod to wait for that perfect moment.

It was challenging to get the exposure just right because of the extreme light differences. I was in fairly dim light and the sunrise was much brighter. It took some careful post processing to get to this point. Any suggestions and critique is welcome.

Michael, definitely not stretching the theme. Your handling of the extreme light differences looks very good, with good details showing inside and a beautiful looking day outside. The tree in front of the rock wall is a fine extra detail. I do see some haloing in the blue sky along the darkest walls. This is quite often the result of too much Clarity (in Adobe terms) or too much microcontrast. While it’s easiest to fix by turning down the microcontrast, you can also burn-in those areas through a brights luminosity mask. Another minor detail is the blueish cast in the rocks along the right hand side, especially in the lower right corner. This looks like you had some sky reflection on those rocks, which our human perception hides as we view in real time but the camera picks up. A localized desaturation will fix that.

Thank you so much for the feedback. It is very helpful!

Hmmm, I think I know where this is. 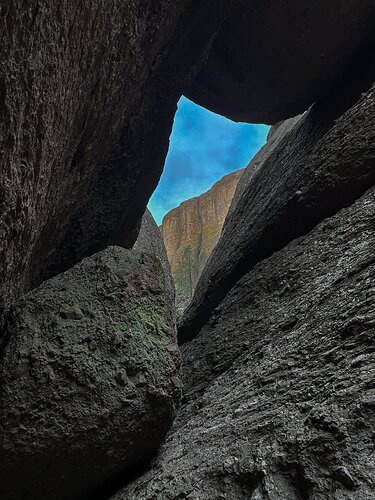 I do enjoy your better version of a picture I would have liked to spend more time taking. The light off of the cliff wall is striking and as noted by Mark the tree adds dimension and nice visual interest. The exposure range is quite high and the contrast between the light and dark forces the eye to the center. That may normally be undesired, but in this instance because you likely want to portray the feeling of looking out from inside a cave, it’s successful.

My only other feedback would be that I would like to see more texture, detail or focus in the cave rocks. They are beautiful features in their own right, and they look a little muted or washed out here.

My picture was taken with an iPhone, as I quickly saw that exposure was going to be a challenge and was not able to setup a tripod to bracket properly. As you know, it’s a tight space and it was late morning so people were coming through and I didn’t want to be that guy. Would love to see any other pictures you may have from this gem of a park. Thanks for sharing!

(Also, I am new here, so if I did not critique this correctly or made any faux pas , my apologies!)

That’s exactly the spot! As I mentioned I was almost alone in the park for several hours so I could take my time. What an incredible place to experience and amazing place to photograph, Thanks for the comments.

By the way, I looked closely at your photograph and you definitely got the texture of the wall much sharper than I did.